Antonio "Tony" Ramiro Romo (born April 22, 1980 in San Diego, California) is an American football quarterback who plays for the Dallas Cowboys of the National Football League. He played college football at Eastern Illinois. He is viewed by many as the top quarterback in the NFL. 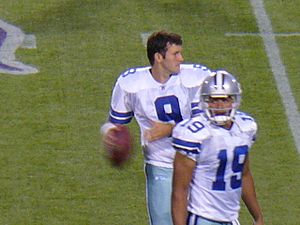 Romo was signed by the Cowboys as an undrafted free agent in 2003. He has had success with Dallas, and is well known by the media. He has the 3rd highest passer rating in NFL history.

All content from Kiddle encyclopedia articles (including the article images and facts) can be freely used under Attribution-ShareAlike license, unless stated otherwise. Cite this article:
Tony Romo Facts for Kids. Kiddle Encyclopedia.