As with most American cities, transportation in Louisville, Kentucky is based primarily on automobiles. However, the city traces its foundation to the era where the river was the primary means of transportation, and railroads have been an important part of local industry for over a century. In more recent times Louisville has become a national hub for air cargo, creating over 20,000 local jobs. The city has also launched several initiatives to promote both utilitarian and recreational bicycling. A 2014 study by Walk Score ranked Louisville the 90th most walkable U.S. city.

The McAlpine Locks and Dam

The McAlpine Locks and Dam is located on the Kentucky side of the Ohio River, near the downtown area. The locks were constructed to allow shipping past the Falls of the Ohio. In 2001 over 55 million tons of commodities passed through the locks. A new lock was constructed to replace two of the auxiliary locks, with a projected completion date of 2008, but was completed in early 2009.

Ferry Service connected Louisville to Southern Indiana for decades, but was made obsolete when the Clark Memorial Bridge was opened. 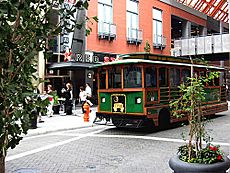 The Toonerville II Trolleys provide transportation throughout downtown Louisville as well as the Bardstown Road corridor.

Public transportation includes buses and chartered vans run by the Transit Authority of River City (TARC). The city buses serve all parts of downtown Louisville and Jefferson County, as well as Kentucky suburbs in Oldham County, Bullitt County, and the Indiana suburbs of Jeffersonville, Clarksville and New Albany. In addition to regular city buses, transit throughout the downtown hotel and shopping districts is served by a series of motorized trolleys known as the Toonerville II Trolley.

Louisville has an intercity bus service as well, provided by Megabus and Greyhound. Departures are from the Louisville Civic Center.

Louisville has several multi-use trails for bikes and pedestrians, many of which are not connected to each other rendering them useless for traversing the city. In the central city, there are several on-road bike paths that help cyclists get around the city by bicycle.

Like most cities, Louisville was served by electric streetcars into the 20th century. The last streetcars ran on May 1, 1948, carrying passengers to and from the Kentucky Derby.

A light rail system has been studied and proposed for the city, but no plan was in development as of 2007.

In March 2007, Mayor Jerry Abramson delivered a keynote address at the League of American Bicyclists' National Bike Summit in Washington D.C. where he described the history and future of bicycling in Louisville.

The city is developing on-street bike lanes and shared-lanes, as well as a one-hundred mile "Metro Loop" trail to encircle the entire county. By the end of 2007, nearly 1/3 of this loop was scheduled to be complete, with another 1/3 to 1/2 coming in the next three to five years as part of the Floyd's Fork corridor project. The project was overseen by the City of Parks initiative, and $38 million in U.S. Federal Government funding was secured for the Floyd's Fork portion of this project alone, with another $20 million in private funding. 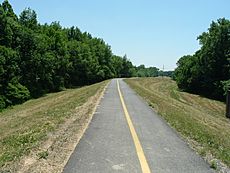 In 2006, Louisville was named a "Bronze-Level Bicycle Friendly Community" by the League of American Bicyclists in recognition of development of bicycling infrastructure and promoting bicycling education and awareness.

A $65 million redesign of Westport Road provided bike lanes only a third of the way, and did not connect residential areas like St. Matthews with suburban retail areas. Mayor Abramson said that the city's bike path offerings were an "urban planning mistake".

All content from Kiddle encyclopedia articles (including the article images and facts) can be freely used under Attribution-ShareAlike license, unless stated otherwise. Cite this article:
Transportation in Louisville, Kentucky Facts for Kids. Kiddle Encyclopedia.