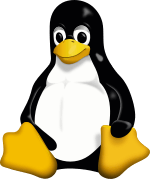 Tux is a mascot of the Linux operating system; a cartoon penguin made by Larry Ewing in 1996. Wherever he is seen, it means such a system can work with Linux. He is also a character in some Linux games, like Super Tux.

The name "Tux" comes from James Hughes, who named the Linux Mascot that as an shortened form of "Torvalds' UniX," as Linus Torvalds was the creator of the Linux operating system. Tux is also an abbreviation of tuxedo.

All content from Kiddle encyclopedia articles (including the article images and facts) can be freely used under Attribution-ShareAlike license, unless stated otherwise. Cite this article:
Tux Facts for Kids. Kiddle Encyclopedia.