Unfabulous is an American teen sitcom that aired on Nickelodeon. The series is about an "unfabulous" middle school student and teenager named Addie Singer, played by Emma Roberts. The show, which debuted on September 12, 2004, was one of the most-watched programs in the United States among children between the ages of 10 and 16. It was created by Sue Rose, who previously created the animated series Pepper Ann and Angela Anaconda, and co-created the character Fido Dido with Joanna Ferrone. The series ended on December 16, 2007, with the third season being the final season.

All the episodes are narrated by Addie, and are told in flashbacks. The show's theme song is performed by Jill Sobule, who also wrote the songs performed throughout the show.

Unfabulous's main character is a teenager named Addie Singer (Emma Roberts), who writes songs about her life in middle school. Her best friends are Geena Fabiano (Malese Jow), who is interested in fashion and designs her own clothes, and the environmentally committed school basketball player Zack Carter-Schwartz (Jordan Calloway). They all attend Rocky Road Middle School in an unspecified East Coast city. However, in episode 34 "The Birthday" when Addie receives a letter from when she was 7 years old the address is listed as "Pinecrest, PA". Addie's older brother Ben (Tadhg Kelly) works at Juice!, a smoothie bar where Addie and her friends often hang out after school.

Throughout the first season, Addie obsesses about her crush on Jake Behari (Raja Fenske), who already has a girlfriend.

For the majority of the second season, however, Addie is dating Randy Klein (Evan Palmer). They break up towards the end of the season and Addie realizes that she still likes Jake. The made-for-TV movie Unfabulous: The Perfect Moment focused on Addie and Jake getting together although Jake will be gone for the rest of the summer in Canada.

In the third season, Addie and Jake finally begin dating and Geena and Zack begin to have feelings for each other. 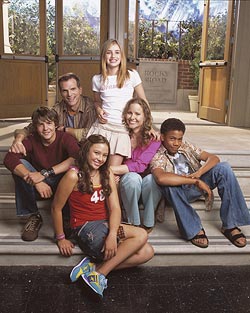 The cast (from left to right) Kelly, Flanagan, Jow, Roberts, Hagan, and Calloway

The show's main character, Addie Singer, also appears in a cross-over episode of Drake & Josh called "Honor Council", in which she helps Megan play a prank on Josh for a video Megan makes for her website. The episode aired in November 2004, a few months after both series had debuted.

Since the series' cancellation, reruns continued to air until July 2008. The show aired reruns on The N but ended in late 2009. The show then returned to TeenNick on October 11, 2011, and lasted until April 2, 2012. The show returned to the channel again on December 3, 2012 but was pulled once again in 2015. Currently it is aired on Popgirl and Nickelodeon Canada.

Along with the start of the second season in September 2005, Nickelodeon also began selling different types of Unfabulous-related merchandise, beginning with the album Unfabulous and More (see Soundtrack below). In November 2005, the album was followed by two books tying into the show, Keepin' It Real and Split Ends, both written by Robin Wasserman, and the first items in a line of clothes based on Addie's wardrobe on the show. Two more books were released in February 2006, Starstruck and Jinxed!.

Before the launch of the third season, a video game based on the show was released for the Game Boy Advance by THQ on September 25, 2006.

All episodes from the first and the second season (including The Perfect Moment) were available for download in the iTunes Store in the U.S. since fall 2006, but are now not available anymore. They have since been put back for download as of 2012.

On September 27, 2005, shortly after the premiere of the show's second season, Columbia Records and Nick Records released the album Unfabulous and More, which serves as both the show's soundtrack and as Emma Roberts' debut album.

The album includes several original songs (among them "Dummy" and "I Wanna Be", both of which were also released as music videos, "I Have Arrived", and "This Is Me", which was co-written by Roberts), as well as some of Addie's songs from the first season (however in newly recorded versions), including "Punch Rocker" and "New Shoes" (both from the episode "The Party"), "94 Weeks (Metal Mouth Freak)" (from "The Bar Mitzvah") and "Mexican Wrestler" (which had previously appeared on Jill Sobule's 2000 album Pink Pearl and in the Unfabulous episode "The 66th Day").

The album peaked at #46 on Billboard's Heatseekers Albums.

All content from Kiddle encyclopedia articles (including the article images and facts) can be freely used under Attribution-ShareAlike license, unless stated otherwise. Cite this article:
Unfabulous Facts for Kids. Kiddle Encyclopedia.