Walter Henry Gordon (June 24, 1863 – April 26, 1924) was a decorated officer in the United States Army with the rank of major general. A veteran of Philippine–American War, he is most noted for his service as Commanding general, 6th Infantry Division during the Meuse-Argonne Offensive in late 1918.

Walter H. Gordon was born on June 24, 1863 in Artonish, Mississippi as the son of William Crawford and Mary (Lewis) Gordon. Following the high school, Gordon received an appointment to the United States Army War College at West Point, New York. He graduated with Bachelor of Science degree and was commissioned second lieutenant in the Infantry branch on July 1, 1886.

He was subsequently ordered to the Madison Barracks, Sackets Harbor, New York, where he joined 12th Infantry Regiment. Gordon served there until July 1887, when his regiment was transferred to Fort Yates, North Dakota for frontier duty during the Indian Wars. In November 1890, he was ordered to the Willet's Point, where he attended the instruction at the Torpedo School.

Gordon was promoted to first lieutenant in November 1892 and joined 18th Infantry Regiment at Fort Leavenworth, Kansas. He served there until June 1893, when he was transferred to Chicago for temporary duty during World's Columbian Exposition. In March 1894, he was attached for garrison duty to Fort Bliss, Texas and remained there until September of that year. Gordon then assumed duty as Professor of Military Science and Tactics at the Louisiana State University in Baton Rouge, Louisiana.

After one year in this capacity, Gordon rejoined 18th Infantry at Fort Sam Houston, Texas and remained there until December 1896, when he assumed duty as Professor of Military Science and Tactics at the Delaware College in Newark, Delaware. 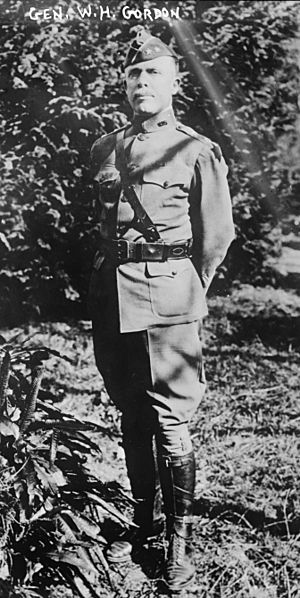 Following the United States entry into the War with Spain over the Spanish colonies on Cuba in April 1898, Gordon was appointed to the temporary rank of Major of the Volunteers and sent to Middletown, Delaware for mustering duty with 1st Delaware Volunteer Infantry. He then served with the regiment at Camp Meade, Pennsylvania and at Wilmington, Delaware and was promoted to the temporary rank of Colonel of the Volunteers in September that year.

Gordon was mustered out of Volunteer Service on November 16, 1898 and reverted to his regular Army rank of first lieutenant. Following a brief leave at home, Gordon rejoined 18th Infantry Regiment in mid-January 1899 and embarked for the Philippines for garrison duty. While en route to that country, Philippine–American War broke out and he was promoted to captain on March 2, 1899. Gordon went ashore at the end of March and participated in combats against insurgents on Island of Panay as Company commander and Commander of Detachment of Mounted Scouts until September 1901.

He then returned to the United States and was stationed at Fort D. A. Russell, Wyoming and took part in the maneuvers at Fort Riley in September–October 1902. Gordon then sailed back to the Philippines in March 1903 and served as Acting Assistant Adjutant-General, Headquarters, Department of the Visayas during the Moro Rebellion. He returned to the United States in February 1905 and was stationed with 18th Infantry at Fort Leavenworth, Kansas and participated in the maneuvers at Fort Riley, Kansas.

Gordon returned to the Philippines for the third time in November 1907 and served as Regimental Adjutant until February 1908, when he was appointed Officer-in-charge of the Military Information Division at the headquarters, Philippine Department and remained in that capacity until November 1908. Upon his return to the United States, he was assigned to the Military Information Division, War Department General Staff in Washington, D.C. and was promoted to major on March 23, 1909.

In May 1909, Gordon got sick and was on the leave until March 1910, when he was attached to the Office of the Inspector General of the Army under Brigadier general Ernest A. Garlington. He remained in that capacity just for a month, before joined the headquarters of Department of Dakota at St. Paul, Minnesota as Inspector-General.

Gordon was detached in August 1913 and entered the course at Army War College, which he completed in June 1914. He was then ordered to Plattsburg Barracks, where he joined 3rd Infantry Regiment and was promoted to lieutenant colonel on September 13, 1914. Gordon assumed command of the regiment and led his unit during the maneuvers at Madison Barracks in September–October of that year.

The United States already entered the World War I and Gordon was promoted to the temporary rank of brigadier-general on August 5, 1917. For his new rank, he was appointed commanding general, Post and China Expedition and remained in that capacity for one month, when he was ordered back to the United States.

Following his return stateside, Gordon was appointed Commanding officer, Depot Brigade at Camp Meade, Maryland and participated in the training of troops for deployment in France. He was ordered to the newly activated 5th Infantry Division at Camp Logan near Houston, Texas and assumed command of 10th Infantry Brigade in January 1918. Gordon arrived to France in May 1918 and led his brigade during the intensive training in Bar-sur-Aube area.

His brigade was ordered to the Vosges front in June that year and following a period of combat under the French 77th and 21st Divions, Gordon's unit rejoined 5th Infantry Division. Gordon commanded his brigade during the Frapelle engagement in August 1918 and was promoted to the temporary rank of Major general. He then assumed command of 6th Infantry Division and led it during the combat in the Geradmer sector, September – October 1918.

Gordon then commanded 6th Division during the Meuse-Argonne Offensive, from Beauchamp Farm to Artaise, Stonne and Argonne Forest. Following the Armistice, Sixth Division was ordered first to the training area near Aignay-le-Duc and then participated in the occupation of the Rhineland with headquarters at Bad Bertrich until April 1919. For his service during World War I, Gordon was decorated with Army Distinguished Service Medal and also received Legion of Honour and Croix de Guerre with Palm by the Government of France.

Gordon returned with 6th Infantry Division in June 1919 and reverted to the peacetime rank of colonel. He was then transferred to the Fort George Wright near Spokane, Washington and assumed command of 21st Infantry Regiment, but in October that year, Gordon was transferred to Washington, D.C. for duty in the Officer of Inspector General of the Army under Major general John L. Chamberlain.

He was reappointed to the rank of Brigadier general on July 3, 1920 and ordered to Fort Benning, Georgia for duty as Commandant of the Army Infantry School. Gordon assumed additional duty as Commanding general, Fourth Corps Area and also commanded 82nd Infantry Division (then part of the South Carolina Reserves). He held three command at the same time.

Gordon was promoted to the rank of Major general on November 7, 1923 and transferred to the War Department General Staff in Washington, D.C. for duty with Special Board of Officers. He also served as temporary Deputy Chief of Staff, but retired on his own request due to health problems on January 18, 1924 after 38 years of active duty.

All content from Kiddle encyclopedia articles (including the article images and facts) can be freely used under Attribution-ShareAlike license, unless stated otherwise. Cite this article:
Walter Henry Gordon Facts for Kids. Kiddle Encyclopedia.