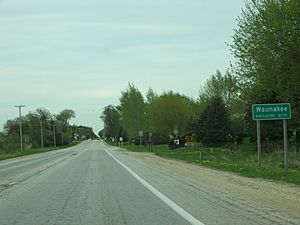 Waunakee is a village in Dane County, Wisconsin, United States. The population was 14,879 at the 2020 census. It is part of the Madison Metropolitan Statistical Area. Waunakee bills itself as "The Only Waunakee in the World."

There were 4,344 households, of which 45.3% had children under the age of 18 living with them, 64.3% were married couples living together, 8.8% had a female householder with no husband present, 3.3% had a male householder with no wife present, and 23.7% were non-families. 19.5% of all households were made up of individuals, and 8.4% had someone living alone who was 65 years of age or older. The average household size was 2.76 and the average family size was 3.20.

The Waunakee Airport (FAA ID 6P3) is a privately owned general aviation airport 1-mile (1.6 km) south of the village center. A number of homes are located along the runway, and many have hangars, allowing the airport to function as an airpark.

Waunakee added a local Village Center in 2006 that acts as a central nucleus for the community by offering a fitness center, senior center, meeting rooms, and a gymnasium. The Waunakee Business Park is a 160-acre (0.65 km2) business park development that hosts large and small business operations. Recent years have seen two redevelopments and two new apartment buildings on Main Street, a reconstruction and new streetscape on both Main Street and Century Avenue, a mural on the Waunakee Furniture building, and annual public art displays.

A major employer in the village is Scientific Protein Laboratories.

Waunakee is served by the Waunakee Community School District, whose schools include:

The three public elementary schools serve students from kindergarten through 4th grade, the intermediate school 5th and 6th grades, the middle school 7th and 8th grades, and the high school grades 9 through 12.

Warrior Stadium is the home of the high school lacrosse, football and track teams. It consists of a synthetic turf field.

All content from Kiddle encyclopedia articles (including the article images and facts) can be freely used under Attribution-ShareAlike license, unless stated otherwise. Cite this article:
Waunakee, Wisconsin Facts for Kids. Kiddle Encyclopedia.