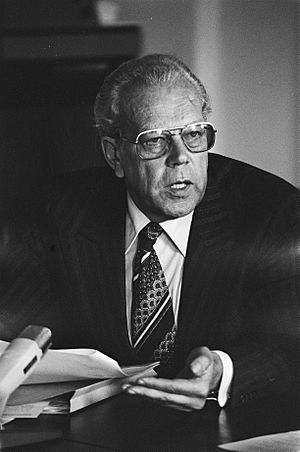 Willem (Wil) Albeda (13 June 1925 - 6 May 2014) was a Dutch politician. From 1966, he was member and from 1973 chairman of the Anti-Revolutionary Party group in the Senate. He was Minister of Social Affairs in the first cabinet Van Agt. After this he returned to the Senate. He later became chairman of the Scientific Council for Government Policy.

Albeda was born in Rotterdam. He died in Maastricht, aged 88.

All content from Kiddle encyclopedia articles (including the article images and facts) can be freely used under Attribution-ShareAlike license, unless stated otherwise. Cite this article:
Wil Albeda Facts for Kids. Kiddle Encyclopedia.