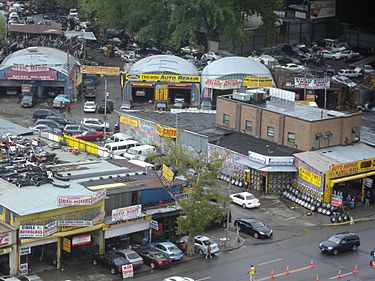 Willets Point, also known locally as the Iron Triangle, is the name currently applied to an industrial neighborhood within Corona, in the New York City borough of Queens.

Willets Point is currently undergoing a US$4 billion redevelopment project to construct retail and residential buildings in the area., as well as a movie theater.

Willets Point is bounded by Northern Boulevard to the north, 126th Street and Citi Field to the west, Roosevelt Avenue and Flushing Meadows–Corona Park to the south, and the Flushing River to the east. The New York City Subway's IRT Flushing Line (7 <7> trains) has the Mets – Willets Point station near the southwest corner of the "Triangle", at Roosevelt Avenue at 126th Street. The neighborhood is part of Queens Community Board 7.

Willets Point has no sidewalks or sewers as of 2013[update]; due to the area's geography and the lack of paved roads in the area, flooding is common during heavy rains. The area is industrial with auto repair shops, scrap yards, waste processing sites, and similar small businesses. It has been described as being "post-apocalyptic" in appearance. A Hunter College study found that Willets Point was a "unique regional destination" for auto parts and repairs.

Several redevelopment plans for Willets Point were proposed during the 1960s, 1970s, 1980s, and 1990s, but never consummated. Before the 1964 New York World's Fair, Robert Moses tried to incorporate Willets Point into Flushing Meadows-Corona Park but failed when the junkyard owners hired Mario Cuomo as their lawyer.

After the New York Jets left Shea Stadium (following the 1983 season) to play at the Meadowlands, Willets Point was the proposed location for a new, 82,000-seat domed football stadium that would bring the Jets back to New York. After the Jets decided to remain in New Jersey, the proposed stadium was also discussed as a potential new home for the St. Louis football Cardinals, Atlanta Falcons, and New Jersey Generals. Since 2009, the neighborhood has been discussed as a potential site for the New York Islanders to move to, as well as a Major League Soccer team.

Willets Point was also the location for a proposed stadium for the 2012 Summer Olympics and press center, which would have replaced Shea Stadium and the car junkyards; however, New York City lost its Olympic bid to London. Nonetheless, Citi Field, a new New York Mets stadium, was constructed to replace the aging, adjacent Shea Stadium, which was demolished in 2009.

On May 1, 2007, New York Mayor Michael Bloomberg, calling Willets Point "another euphemism for blight", announced his administration's new plan for urban renewal in the area. The plan called for replacing the scrapyards and industrial sites with a sustainable and affordable mixed-use development including a convention center, 5,500 units of housing, 1.7 million sf of retail, 130,000 sf k-8 school, 500,000 sf of office space, 150,000 sf Community Facility, as well as environmental remediation, installation of sewers and other infrastructure, and relocation of previous businesses. Willets Point would create more than 5,300 permanent jobs and add 18,000 construction jobs.

On April 9, 2008, the Willets Point Industry and Realty Association (WPIRA), a group of the 10 largest business and land owners in Willets Point, filed a lawsuit in the US District Court for the Eastern District of New York against the City of New York seeking a court order requiring the City to provide infrastructure improvements, including repairs to streets and storm sewers, installation of sanitary sewers, street lights, street signs and other services that the City had allegedly withheld for over 40 years, as well as unspecified damages for past neglect. Judge Edward R Korman granted the City's motion to dismiss this lawsuit on November 25, 2009.

On April 21, 2008, a majority of the New York City Council's members expressed their "adamant opposition" to the proposed Willets Point redevelopment in writing to Robert Lieber, New York City's Deputy Mayor for Economic Development. The "adamant opposition" letter was signed by 29 City Council members. Three days later, Queens elected officials, various union members and others rallied at a press conference on the steps of New York City Hall. The gathering was in support of having the City move forward with the proposed development of Willets Point. The rally was led by Queens Borough President Helen Marshall. Also in attendance were state senators Frank Padavan and Toby Ann Stavisky and Assembly Member Nettie Mayersohn, former Queens Borough President Claire Shulman and Queens Chamber of Commerce President Al Pennisi who spoke about the vital role the development would play in the Queens business community.

On June 30, 2008, the plan was approved with numerous conditions by Queens Community Board 7 and by the City Planning Commission on September 24, 2008. The City Council held a public hearing regarding the plan on October 17 and voted on November 13, 2008 to approve the redevelopment plan, which includes the potential use of eminent domain to acquire property. Some property owners have vowed to try to stop the plan through litigation, while others voluntarily sold their property to the City during the fall of 2008 so as to avert involuntary taking of their property through eminent domain and relocation by the New York City Economic Development Corporation. On July 31, 2009, the Corporation announced plans to invest $100 million into infrastructure projects in Queens that would include development in Willets Point.

In March 2009, Joseph Ardizzone (the only resident of Willets Point) and several local businesses filed another lawsuit, in state court, challenging the City's approval of the development plan and contending that the plan had undergone inadequate environmental review. Allegations arose in 2009 that the City of New York and its Economic Development Corporation had improperly provided funding to organizations that lobbied the City Council in favor of the Willets Point development plan. In May 2010 the New York City Department of Transportation opened a new Municipal Asphalt Plant on Harper Street, on the north side of Willets Point.

The Willets Point Project will also include 2,490 housing units, of which 35% will be affordable housing. Affordable housing will be built as part of the second phase of the project. These housing units amount for a total of 1,000 affordable units that will be accessible via the Van Wyck Expressway which will have two new ramps as part of the plans. The city has allocated $66 million of their budget for the design and construction of the new ramps.

In 2014, Bill de Blasio replaced Michael Bloomberg as Mayor of New York. He opposed the redevelopment plan because of the lack of affordable housing but the City Council continued with the project.

By the end of July 2016, the last auto repairs shops between 38th and Roosevelt Avenues had been closed and demolition had started on the development, now priced at US$4 billion.

From Flushing; Willets Point is in the background and to the left is Citi Field (2010)

All content from Kiddle encyclopedia articles (including the article images and facts) can be freely used under Attribution-ShareAlike license, unless stated otherwise. Cite this article:
Willets Point, Queens Facts for Kids. Kiddle Encyclopedia.