Wynnewood is a city in Garvin County, Oklahoma, United States. It is 67 miles (108 km) south of Oklahoma City. The population was 2,212 at the 2010 U.S. census, compared to 2,367 at the 2000 census. Located in what was then the Chickasaw Nation of Indian Territory, it began as a village called "Walner" in 1886, on the proposed route of the Gulf, Colorado and Santa Re Railway. Railroad workers from Pennsylvania named the community for Wynnewood, a community outside of Philadelphia. The name became official on April 6, 1887.

Wynnewood quickly became a market town for the surrounding area. In 1887, Presbyterian missionary Mary Semple Hotchkins moved her school for Chickasaw children from Cherokee Town to Wynnewood. In 1901, local citizens paid for building Indianola College. A promotional brochure published in 1907 called Wynnewood "the Queen City of the Famous Washita Valley." It could soon boast of having an opera house, electric lights, telephones, and the thirty-room Eskridge Hotel. 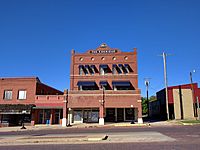 The Eskridge Hotel continued in business until 1970, when it closed for good. In 1973, the Wynnewood Historical Society bought the three-story structure and converted it into a museum of local history. Hotel rooms have been decorated to depict life in Oklahoma during the late 19th century and early 20th century. In 1978, the former hotel was added to the National Register of Historic Places (NRHP).

There were 965 households out of which 29.4% had children under the age of 18 living with them, 44.4% were married couples living together, 15.1% had a female householder with no husband present, and 37.0% were non-families. 33.3% of all households were made up of individuals and 18.7% had someone living alone who was 65 years of age or older. The average household size was 2.39 and the average family size was 3.05.

Wynnewood is considered to be a high risk for tornadoes, with an average of three such storms annually. One source says that as of August 2016, Wynnewood has had 175 tornadoes since 1950. 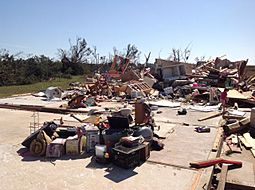 EF4 damage to a well-built house east of Katie, Oklahoma

On May 9, 2016, a violent stovepipe tornado touched down to the south of Katie, 16 miles (26 km) southwest of Wynnewood, at 4:06 PM, initially snapping trees at EF1 intensity along County Road N3170. Additional trees were snapped along N3180 Road before the tornado intensified to EF3 strength east of that location, where a home was left with only interior walls standing and large trees were denuded and stripped of foliage. A home at the edge of the damage path had windows blown out. The tornado maintained EF3 strength and began to intensify further as it crossed N3210 Road, where several trees were debarked and ground scouring began to occur. A house near the south edge of the damage path had its roof torn off, and power poles were snapped as well. Shortly afterward, the tornado inflicted EF4 damage near the intersection of Indian Meridian Road and E1680 Road, where a well-built, anchor-bolted brick home was almost entirely flattened with a large portion of the foundation slab swept clean of debris. Trees in this area were debarked, extensive ground scouring occurred, and vehicles were thrown and mangled beyond recognition. A second brick house had its roof torn off, and multiple power poles were snapped. Further to the east, a poorly anchored frame home was swept cleanly away at high-end EF3 intensity. A nearby mobile home was also destroyed, with a vehicle parked nearby being rolled across the edge of a nearby pond and severely damaged. A few other homes in this area sustained less severe damage. The tornado weakened dramatically as it crossed N3250 Road, snapping and uprooting several trees before it dissipated near Interstate 35 to the southwest of Wynnewood at 4:27 PM. One person was killed by this tornado, and several others were injured.

All content from Kiddle encyclopedia articles (including the article images and facts) can be freely used under Attribution-ShareAlike license, unless stated otherwise. Cite this article:
Wynnewood, Oklahoma Facts for Kids. Kiddle Encyclopedia.