A History of English Food facts for kids

A History of English Food is a history of English cuisine from the Middle Ages to the end of the twentieth century written by the celebrity cook Clarissa Dickson Wright. Each era is treated in turn with a chapter. The text combines history, recipes, and anecdotes, and is illustrated with 32 pages of colour plates.

The book was marked as a future classic by The Independent; it was welcomed by critics from The Telegraph and The Spectator, but disliked by the critic in The Guardian.

The book is divided into 15 chapters, forming a strict chronological sequence of periods such as "the Georgian age". The chapters freely combine outlines of the historical context, descriptions of recipes, stories about significant figures, and personal anecdotes. For example, "The Medieval Larder" has an extensive section on the "medieval pig" (page 22ff), leading into a description of Dickson Wright's own childhood memories of helping to kill her father's pigs and making black pudding, chitterlings and sausages, as well as having hams and bacon smoked. To this is added her personal opinion; thus, the medieval chapter ends "The battles of Crécy and Agincourt would scarcely have been won had they been fought by soldiers from a destitute nation." (page 41)

Each chapter is opened with a monochrome illustration from its period, with a detailed caption.

There are 32 pages of colour plates illustrating famous cookery writers such as Robert May and stages of English cuisine such as "The 1950s kitchen". 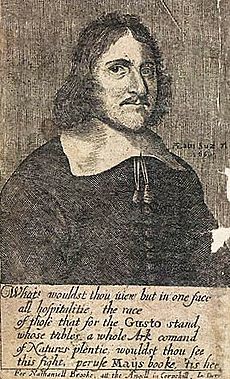 The book is illustrated with photographs of historical figures in English cuisine, such as the cook Robert May, author of The Accomplisht Cook, 1660

All content from Kiddle encyclopedia articles (including the article images and facts) can be freely used under Attribution-ShareAlike license, unless stated otherwise. Cite this article:
A History of English Food Facts for Kids. Kiddle Encyclopedia.