Amagansett is a census-designated place that roughly corresponds to the hamlet by the same name in the Town of East Hampton in Suffolk County, New York, on the South Shore of Long Island. As of the 2010 United States Census, the CDP population was 1,165. Amagansett hamlet was founded in 1680.

The area is sometimes referred to as Skimhampton. However this specifically refers to the area south of the Montauk Highway along Skimhampton Road. The artist Childe Hassam, who lived on Egypt Lane in East Hampton village, painted the area during the late 19th and early 20th centuries. Portions of Skimhampton and the area on the northwest side of Amagansett hamlet are within the census-designated place of East Hampton North.

Amagansett derives its name from the Montaukett name for "place of good water" from a water source near what today is Indian Wells beach.

Unlike the rest of the Hamptons, Amagansett was initially settled by the Baker, Conklin, and Barnes families, descendants of English settlers, and the Dutch brothers Abraham and Jacob Schellinger, the sons of a New Amsterdam merchant who moved to East Hampton between 1680 and 1690 after the English took over New Amsterdam.

During Operation Pastorius, a failed Nazi attack on the United States staged in June 1942, during World War II, four German spies were dropped off from a submarine on Atlantic Avenue beach in Amagansett, where they made their way to the village's Long Island Rail Road station and boarded a train for New York. A Coast Guardsman assigned to watch the beach noticed the suspicious strangers on the beach and notified the police and the FBI. In the spring of 2007 the original Coast Guard station, which had been moved to a private residence in 1966 to protect it from demolition, was moved back to near its original location at Atlantic Avenue beach. The Coast Guard barracks are now part of the East Hampton Town Marine Museum which includes exhibits from the town maritime history, including whaling relics and a cannon from the American Revolution ship HMS Culloden which ran aground at Montauk.

In 1998 President Bill Clinton, who was vacationing in East Hampton, gave a Saturday radio address from the Amagansett Fire House. On the same visit, Alec Baldwin and Kim Basinger hosted a dinner for the President at their home in the Stony Hill section of the hamlet. In 1999 President Clinton made his second visit to Amagansett and found time to play a round of golf at South Fork Country Club. He was joined by local prodigy Matthew Scott. When asked about his experience with the nation's 42nd president, Scott replied, "He was taller than I expected, which I didn't appreciate."

Amagansett includes a section of Further Lane, which is a block from the ocean, and has one of the biggest collections of mansions in East Hampton. In 2007, one of the estates sold for $107 million, the highest price for a private residential property. As part of the settlement, several 18th and 19th century buildings which had been moved to the estate to prevent demolition were moved elsewhere in the town—including five that were moved to form a campus for the East Hampton town government.

"Amagansett", a pictorial history of the hamlet, was published in 1997 by Carleton Kelsey, longtime director of the Amagansett Free Library and former town clerk, and Lucinda Mayo, descendant of one of Amagansett's 17th century founders.

Many houses and other buildings still stand from the 19th and even 18th century in Amagansett, Montauk, the Hamptons and other Long Island communities.

At the end of the last ice age, Amagansett stood at the eastern tip of Long Island. At that time, Montauk was an island on its own in the Atlantic. In the intervening several thousand years, ocean currents, or littoral drift, filled in space with sand. This area is now known as Napeague.

Distinct places within Amagansett include Amagansett village, Beach Hampton, and the Devon Colony on Gardiner's Bay. Other places of geographic significance include the "Walking Dunes" in Napeague and the Atlantic Double Dunes, which are protected by The Nature Conservancy and local and federal governments. 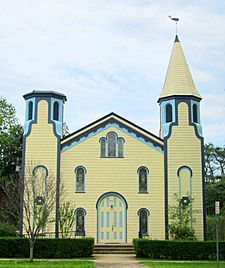 The First Presbyterian Church was founded in 1860

Demographics for the CDP

There were 493 households out of which 21.1% had children under the age of 18 living with them, 48.1% were married couples living together, 6.5% had a female householder with no husband present, and 43.0% were non-families. 34.9% of all households were made up of individuals and 15.6% had someone living alone who was 65 years of age or older. The average household size was 2.16 and the average family size was 2.78.

All content from Kiddle encyclopedia articles (including the article images and facts) can be freely used under Attribution-ShareAlike license, unless stated otherwise. Cite this article:
Amagansett, New York Facts for Kids. Kiddle Encyclopedia.