Among Us facts for kids

Among Us is an online multiplayer social deduction game developed and published by American game studio InnerSloth and released on June 15, 2018. The game takes place in a space-themed setting, in which players each take on one of two roles, most being Crewmates, and a predetermined number being Impostors.

The goal of the Crewmates is to identify the Impostors, eliminate them, and complete tasks around the map; the Impostors' goal is to secretly sabotage and kill the Crewmates before they complete all of their tasks. Players suspected to be Impostors may be eliminated via a vote, which any player may initiate at any time. Crewmates win if all Impostors are eliminated or all tasks are completed; Imposters win if there is an equal number of Impostors and Crewmates, or if a critical sabotage goes unresolved. 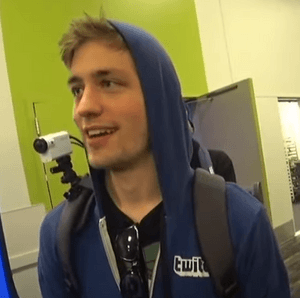 Twitch streamer Sodapoppin, credited with popularizing Among Us on Twitch

The COVID-19 pandemic was frequently cited as a reason for the popularity of Among Us, as it allowed for socialization despite social distancing. 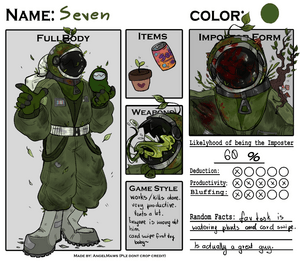 A character sheet for a fan-made Among Us "crewsona"

All content from Kiddle encyclopedia articles (including the article images and facts) can be freely used under Attribution-ShareAlike license, unless stated otherwise. Cite this article:
Among Us Facts for Kids. Kiddle Encyclopedia.