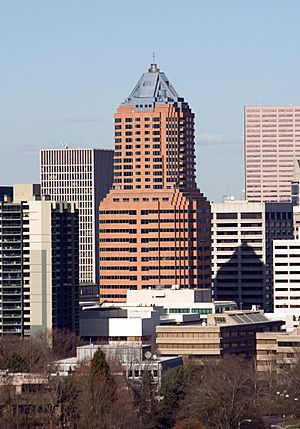 Portland architecture includes a number of notable buildings, a wide range of styles, and a few notable pioneering architects.

The scale of many projects is relatively small, as a result of the relatively small size of downtown-Portland blocks (200 feet by 200 feet) and strict height restrictions enacted to protect views of nearby Mount Hood from Portland's West Hills. Although these restrictions limit project size, they contribute to Portland's reputation for thoughtful urban planning and livability.

Many older buildings have been preserved and re-used, including many glazed terra-cotta buildings.

Portland is a leader in sustainable architecture and is known for its focus on urban planning. As of 2009, Portland has the second highest number of LEED-accredited "green" buildings of any city in the U.S., second only to Chicago.

Well-known architect Pietro Belluschi began his career in Portland with the prolific firm of A.E. Doyle, leaving his imprint upon the city until the 1980s. Other notable architects and firms who have worked in Portland are Skidmore, Owings and Merrill (SOM), Michael Graves, Cass Gilbert, Rapp and Rapp, Daniel Burnham & Co., Kohn Pedersen Fox (KPF), Frank Lloyd Wright, Richard Neutra, Zimmer Gunsul Frasca Architects (ZGF) and Brad Cloepfil of Allied Works. Local architects that have had a large influence on Portland's architecture include Francis Marion Stokes and his father William R. Stokes (combined works include over 270 buildings from 1882 to the 1960s), the Victorian-era architect Warren H. Williams (architect of several surviving cast-iron buildings including the Blagen Block as well as the stick-gothic Old Church) and Whidden & Lewis (architects of Portland City Hall, the long demolished Portland Hotel, the Weinhard Brewery Complex, the Failing Office Building, several office buildings on SW 3rd Ave. and numerous residences).

The tallest high-rises and skyscrapers in Portland (as of April 2016) are: 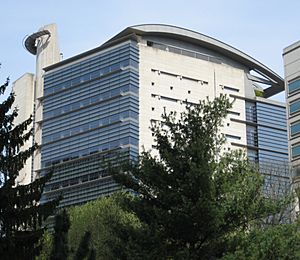 Other notable buildings in Portland include:

The Steel Bridge over the Willamette River

Portland has many bridges:

Bridges on the Willamette River

Bridges on the Columbia River

All content from Kiddle encyclopedia articles (including the article images and facts) can be freely used under Attribution-ShareAlike license, unless stated otherwise. Cite this article:
Architecture of Portland, Oregon Facts for Kids. Kiddle Encyclopedia.