The Arlene Schnitzer Concert Hall (opened as the Portland Publix Theatre before becoming the Paramount Theatre after 1930) is a historic theater building and performing arts center in Portland, Oregon, United States. Part of the Portland Center for the Performing Arts, it is home to the Oregon Symphony, Portland Youth Philharmonic, Metropolitan Youth Symphony, White Bird Dance Company, and Portland Arts & Lectures. It is also a concert and film venue. Originally (and sometimes still referred to as) the Paramount Theatre, it is also locally nicknamed "The Schnitz".

It is the last surviving theater building on Broadway, which was once lined with large theater houses. 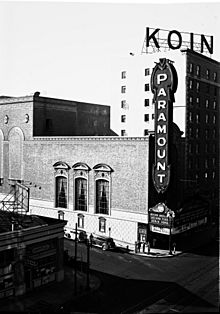 The architectural firm Rapp and Rapp, famous for its theater buildings, designed the Italian Renaissance-style building. The building was variously described by the newspapers as being of the French Renaissance or Northern Italianate style. The Paramount was considered, at its opening, to be the largest and most lavish theater for a city the size of Portland. Originally opened as the Portland Publix Theatre, a vaudeville venue in March 1928, the name changed to the Paramount Theater in 1930, as the owners had a contract to run Paramount films locally. The building continued to show films until 1972, after which it hosted concerts.

Visitors were greeted by a 65-foot (20 m) high "Portland" sign above the Broadway Marquee, which contained approximately 6,000 theatrical lights. The sign read "Paramount" from 1930 to 1984. The theatre was designed with many foyers and lobbies. The main entrance to the auditorium boasted huge French-paned windows facing east and south, covered with velvet drapes. The walls were covered with mirrors and marble, and the floors were covered with expensive carpets. The furnishings had been purchased from a French museum and private collections. The concessions stand was made of marble and stretched nearly half the length of the main lobby. It was described as the "longest candy counter in the West."

The top row of the balcony seats was six stories above the stage. Small staircases from the main lobby led to the balcony area which contained men's and ladies' lounges. The men's lounge was equipped with fireplaces, telephones, radios, phonographs and attendants. The women's lounge was furnished with dressing tables, mirrors, maids and hairdressers. There was also a self-playing Louis XV Ampico-Knabe grand piano in ivory and gold on the bridge over the lobby.

The walls of the auditorium were elaborately decorated with murals and near the front of the stage, small balconies were hung with drapes which hid the pipes from the $46,500 Wurlitzer organ. This four-manual organ console was mounted on an elevator and could be raised to the level of the stage at the touch of a button.

The ceilings were of a special design. The ceiling panels were suspended from the roof of the building and jutted out toward the sides of the auditorium, leaving a small cove next to the wall. A series of electric light bulbs were set in the hollow, not visible to the audience. Their glow fell on the patrons indirectly, giving the effect of space and freedom. 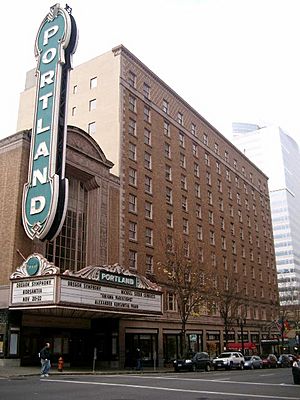 The orchestra pit could hold a 30-piece orchestra. There was also a "flying" stage which could be raised or lowered or moved about above the main stage.

In July 1928, the theatre appeared on the front page of the newspaper, figuring in an unusual robbery. A young man, Robert Nolan, had lived in Southern California for a time. While living there, he appeared as an extra in the movie, "Wheel of Chance." He had moved back to Oregon and when he saw that the movie was showing at the Portland theatre, he decided to go see himself on the "silver screen." While he was in the lobby, he saw two people walking by carrying the day's receipts. As he was watching the movie, the idea formed that he should take a chance before he left Portland to acquire a little extra money. He went to the box office and held up the attendants for $1176. He was apprehended several days later, having spent all but $1.50 of the money on bootleggers and drinking parties.

During the Great Depression, the theatre hired roving musicians and a "psychic" to entertain in the lobby before movies, in an effort to attract patrons to the theatre. Admission was 50 cents at this point, down 10 cents from opening night.

By 1936, the theater had been sold to the Evergreen chain, in conjunction with John Hamrick, and between them, they owned eight movie theatres in Portland.

In 1965, the exterior and interior of the building were in a decline, and in September of that year, part of the cast iron balcony which faces Park Avenue (a 150 lb (68 kg) piece of gingerbread), gave way and fell to the pavement below. The break was along an old fracture line caused by a previous earthquake. The iron had rusted over time without proper maintenance. In August 1970, chunks of the masonry on the corner of Main and Broadway gave way. Two huge blocks, 350 lb (160 kg) each, fell from the facade, one of them crashing into the main marquee below. The masonry blocks were said to have fallen due to the age of the building. The owners did not seem to be putting any money into maintenance. The theatre was offered for sale in December 1970 and was purchased by John Haviland in 1971, who owned the Park-Haviland Hotel. The theatre was leased to Tom Moyer, owner of a chain of movie theaters.

Haviland felt that it was uneconomical to operate a 3000-seat theater in the days of television. The last regular film showing was on August 15, 1972 (Dr. Phibes Rises Again with Vincent Price).

In 1972, a Seattle-based partnership was formed, Paramount Northwest. They leased the theatre for three years, with an option for six more, and promoted live concerts. Heart played there as part of the "Catch a Rising Star" series (which included Tom Petty and Elvis Costello, among others), for the admission price of 92 cents (promoted by local radio station KGON, 92.3 FM). John Haviland still owned it and claimed that the rent was "1/10 of what it should be for such a theatre": $4000 per month. In December 1972, Haviland proposed a state-run gambling casino on the property, claiming he was losing more than he could afford on the Paramount.

In March 1975, Haviland conducted an auction during which he sold off all the statuary, pipe organ, antique furniture, 16th century suit of armor, mirrors, China, Oriental rugs, original oil paintings, lighted gold-leaf music stands, and pianos (there were 3 grand pianos); basically everything that was not attached to the walls or floors. Haviland was trying to drive out the rock-concert promoting tenants and went into a legal dispute with Paramount Northwest over the lease. He felt that the young people targeted by the concerts were not spending enough money and were destroying the theatre. Haviland won a court case preventing Paramount Northwest from renewing their lease option. Haviland intended to renovate the theatre and offer a higher-class type of entertainment, including dinner theatre.

The City of Portland attempted to buy out the owner in 1982, but talks broke down. The city council finally voted to condemn the building. A condemnation hearing jury determined that the city would have to pay the owner $4.1 million as compensation for the building. 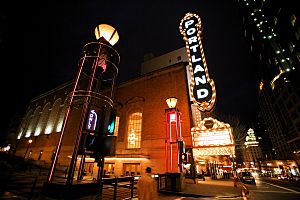 The Schnitzer at night

In 1972, the Portland City Council voted to give the building Landmark Status, over the objections of John Haviland, the owner. The landmark status applied only to the exterior of the building. Many people felt that the interior of the building was more valuable architecturally. The building (as the Paramount Theatre) was placed on the National Register of Historic Places in 1976.

A major renovation began in September 1983 to the designs of Boora Architects, restoring the building to much of its original opulence. The interior of the auditorium, however, was painted one neutral color, rather than restoring the murals that had decorated it. Portland residents Arlene and Harold Schnitzer contributed generously to the completion of the initial phase of the Portland Center for the Performing Arts. The one-year, $10 million renovation involved repairing, recasting or replacing much of the theatre's ornate interior as well as making it comfortable and safe for today's audiences and performers.

The landmark 65-foot-tall "Paramount" sign was removed on March 18, 1984, to be used by Ballard Sign Company of Salem as a model for a new replica which would restore the wording used originally (1928–1930): "Portland", appropriate for the building's change in use as well as being historically fitting. The new replica sign, with neon letters five feet tall, was attached to the building on September 4, 1984. The theatre re-opened later the same month.

When the performing arts center was opened in 1984, it was decided to name the Portland Theatre building after Arlene Schnitzer.

The original theater organ and statuary were sold off in an auction on March 26, 1975.

Partial list of notable personal appearances made on the stage of the Arlene Schnitzer Concert Hall:

All content from Kiddle encyclopedia articles (including the article images and facts) can be freely used under Attribution-ShareAlike license, unless stated otherwise. Cite this article:
Arlene Schnitzer Concert Hall Facts for Kids. Kiddle Encyclopedia.