Attalla is a city in Etowah County, Alabama, United States. As of the 2010 census, the population was 6,048. 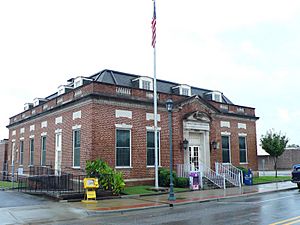 The U.S. Post Office in Attalla was added to the National Register of Historic Places on June 21, 1983.

The town occupies the site of an Indian village which was of considerable importance during the Creek War. It was in Attalla that David Brown, a Cherokee assisted by the Rev. D. S. Butterick, prepared the Cherokee Spelling Book.

Attalla was not founded until 1870, on land donated by W. C. Hammond, a plantation owner. It was incorporated as a city government on February 5, 1872. The town was officially named "Attalla" in 1893, from the Cherokee language word meaning "mountain". Attalla was prosperous until the railroads that it depended on went into bankruptcy.

Attalla is the site of the first hydroelectric dam to provide electricity for a city, constructed in 1887.

William Lewis Moore, a U.S. postman and white civil rights activist, was murdered here on April 23, 1963 as he tried to walk from Chattanooga, Tennessee to Jackson, Mississippi to deliver his letter in support of civil rights to Mississippi Governor Ross Barnett. The suspected murderer, Floyd Simpson, was never charged with the crime.]].

According to the U.S. Census Bureau, the city has a total area of 7.0 square miles (18.1 km2), all of it land. Big Wills Creek, a tributary of the Coosa River, flows southeasterly through the city. The southern end of Lookout Mountain rises to the east overlooking the city.

The Attalla City School System is the public school district. As of 2006 it has some 1,823 students.

The district includes the following schools:

All content from Kiddle encyclopedia articles (including the article images and facts) can be freely used under Attribution-ShareAlike license, unless stated otherwise. Cite this article:
Attalla, Alabama Facts for Kids. Kiddle Encyclopedia.