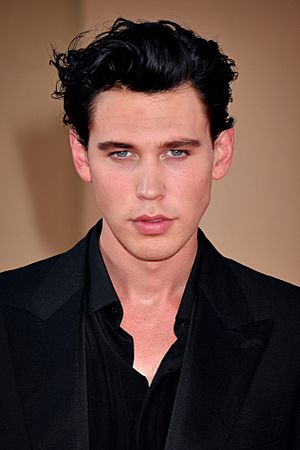 Austin Butler (born August 17, 1991 in Anaheim, California) is an American actor. He is best known for his role as Jake Krandle in the TV series iCarly and as James Garrett in Zoey 101.

Austin Butler was born in Anaheim, Los Angeles. His parents are Lori and David Butler. His first acting job was in a supporting role in the TV Series Ned's Declassified School Survival Guide. His older sister also plays in that TV series. From 2007 to 2008 he played in the 4th season of Zoey 101 as James Garrett. Other television appearance were Hannah Montana, iCarly, Jonas L.A., Zeke and Luther and Wizards of Waverly Place. In 2009, he was in the TV series Ruby & the Rockits as Jordan Gallagher. This series was unsuccessful and ended after 10 episodes.

Later, he played with Ashley Tisdale in the film Aliens in the Attic and in Sharpay's Fabulous Adventure. Since 2011, he has been in the ABC-Family-Series Switched at Birth.

He is in a relationship with Vanessa Hudgens.

All content from Kiddle encyclopedia articles (including the article images and facts) can be freely used under Attribution-ShareAlike license, unless stated otherwise. Cite this article:
Austin Butler Facts for Kids. Kiddle Encyclopedia.