The Avra Valley is a 50-mile (80 km) long northwest-southeast valley, bordering the west of Tucson, Arizona. The Tucson Mountains are at the valley's center-east, with suburbs ranging east of the Tucson Mountains and trending northwest to the Avra Valley's northeast. This entire northwest stretch from Tucson contains the northwest trending Interstate 10, the route to Casa Grande and Phoenix. The northeast of the valley contains Marana on I-10, the Pinal Airpark, an aircraft storage park, and other communities along I-10. Avra Valley Airport is a general aviation airport in Marana, located about 15 miles (24 km) northwest of Tucson and being used for storage of classic propeller-era airliners. 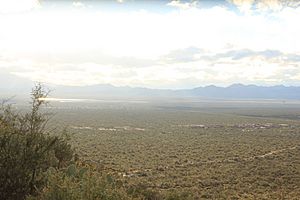 Avra Valley is a narrow valley, only about 10 miles wide in some locations, and bordered completely on the west by low elevation, arid mountain ranges. From the northwest, the mountains are the West Silver Bells, Silver Bell Mountains, Watermans, and then in the southwest the Roskruge Mountains. South of the Roskruge, Arizona Route 86 enters the valley from the Tohono O'odham Nation to the west. Robles Junction, Arizona, is also in the southwest, at the junction of the valley going southwest to Sasabe, the Altar Valley. Robles Junction is also at the northwest of the mountain range on Avra Valley's southern border, the Sierrita Mountains.

The north of the Avra Valley narrows at the Silver Bell Mountains and Marana to the east. The region merges into the wider flatlands associated with the floodplain regions of the northwestern Santa Cruz River where it begins to merge with the Gila River.

The Saguaro National Park, mostly on Tucson's southeast in the Rincon Mountains has a smaller section made up of much of the Tucson Mountains. The National Park is famous for the Saguaro, Carnegiea gigantea.

The southeast corner of the Avra Valley contains the San Xavier Mission. The mission is located in the western portion of the San Xavier Indian Reservation a subregion, and part of the Tohono O'odham Nation of Arizona which have major lands west of the Baboquivari Mountains and Altar Valley west and southwest.

All content from Kiddle encyclopedia articles (including the article images and facts) can be freely used under Attribution-ShareAlike license, unless stated otherwise. Cite this article:
Avra Valley Facts for Kids. Kiddle Encyclopedia.