The Battle of Milliken's Bend, fought June 7, 1863, was part of the Vicksburg Campaign of the American Civil War. Confederate Lt. Gen. John C. Pemberton and his army were besieged in Vicksburg, Mississippi, by Union commander Maj. Gen. Ulysses S. Grant and the Army of the Tennessee.

In an effort to cut Grant's supply line and relieve the city, the Confederates attacked the Union supply area at Milliken's Bend up the Mississippi. The Milliken's Bend area, 15 miles to the northwest of Vicksburg, had until recently served as a staging area for Grant's Vicksburg Campaign. It was a site of supply depots and hospitals, many of which were manned and guarded by black soldiers, some of whom were recently recruited men who were freed slaves.

Although a relatively small battle, it was distinguished by the prominent role played by black Union soldiers who, despite lacking much military training, fought bravely with inferior weaponry and finally drove off the Confederates with help from gunboats.

Confederate President Jefferson Davis was under heavy political pressure to come to the aid of the besieged Pemberton and his 40,000 troops, bottled up in Vicksburg by Grant's 60,000 troops. Under the belief that Grant's supply lines on the west bank of the Mississippi, on the Louisiana side across from Vicksburg, were vulnerable, Davis instructed Trans-Mississippi Department Commander Lt. Gen. Edmund Kirby Smith to send troops to break up that supply line. Unknown to either Smith or Davis, Grant had recently shifted his supply lines to the east bank of the Mississippi above Vicksburg.

Smith ordered Maj. Gen. Richard Taylor to mount this attack. He assigned Maj. Gen. John George Walker's Division of Texans, known as Walker's Greyhounds, to Taylor's command for that purpose. Taylor objected, citing the marshy nature of the terrain and the uncertainty that the supply line still existed. He preferred instead to take Walker's troops south to attack a vulnerable New Orleans, poorly defended with the movement of most of Nathaniel P. Banks' Army of the Gulf to Port Hudson. Smith rejected Taylor's plan, and Taylor reluctantly left with Walker and his men, going down the Red River from Alexandria to the Ouachita River, and from there north toward Richmond, Louisiana. 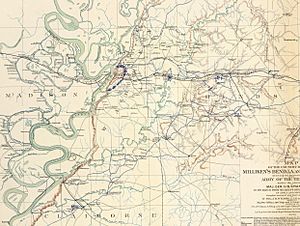 Map of the Vicksburg area from Milliken's Bend to Jackson, Mississippi

On the morning of June 6, Union Colonel Hermann Lieb with the African Brigade and two companies of the 10th Illinois Cavalry made a reconnaissance toward Richmond. About three miles from Richmond, Lieb encountered enemy troops at the Tallulah railroad depot and drove them back but then retired, fearing that many more Rebels might be near. While retiring, a squad of Union cavalry appeared, fleeing from a force of Rebels. Lieb got his men into battle line and helped disperse the pursuing enemy. He then retired to Milliken's Bend and informed his superior by courier of his actions. The 23rd Iowa Infantry and two gunboats came to his assistance.

Walker proceeded east from Richmond at 7 p.m. June 6. At midnight, he reached Oaklawn Plantation, which was situated about 7 miles from Milliken's Bend to the north and an equal distance from Young's Point to the south. Here, he split his command. Leaving one brigade in reserve at Oaklawn, he sent one brigade under the command of Brig. Gen. Henry E. McCulloch north to Milliken's Bend, and a second brigade under the command of Brig. Gen. James M. Hawes south to Young's Point.

Around 3:00 a.m. on June 7, Confederates appeared in force and drove in the pickets. They continued their movement towards the Union left flank. The Federal forces fired some volleys that caused the Rebel line to pause momentarily, but the Texans soon pushed on to the levee where they received orders to charge. In spite of receiving more volleys, the Rebels came on, and hand-to-hand combat ensued. In this intense fighting, the Confederates succeeded in flanking the Union force and caused tremendous casualties with enfilade fire. The Union force fell back to the river’s bank. About that time Union gunboats Choctaw and Lexington appeared and fired on the Rebels. The Confederates continued firing and began extending to their right to envelop the Federals but failed in their objective. Fighting continued until noon when the Confederates withdrew. The Union pursued, firing many volleys, and the gunboats pounded the Confederates as they retreated to Walnut Bayou.

The Confederate attempt to help lift the Siege of Vicksburg had failed.

Grant praised the performance of black U.S. soldiers at the battle, observing that "This was the first important engagement of the war in which colored troops were under fire," and despite their inexperience, the black troops had "behaved well." Assistant Secretary of War Charles A. Dana wrote, "the sentiment of this army with regard to the employment of negro troops has been revolutionized by the bravery of the blacks in the recent battle of Milliken's Bend" Having seen how they could fight, many were won over to arming them for the Union. Even Confederate commander Henry McCulloch said the former slaves fought with "considerably obstinacy." U.S. Secretary of War Edwin M. Stanton also praised the performance of black U.S. soldiers in the battle. He stated that their competent performance in the battle proved wrong those who had opposed their service:

Many persons believed, or pretended to believe, and confidently asserted, that freed slaves would not make good soldiers; they would lack courage, and could not be subjected to military discipline. Facts have shown how groundless were these apprehensions. The slave has proved his manhood, and his capacity as an infantry soldier, at Milliken's Bend, at the assault upon Port Hudson, and the storming of Fort Wagner.

All content from Kiddle encyclopedia articles (including the article images and facts) can be freely used under Attribution-ShareAlike license, unless stated otherwise. Cite this article:
Battle of Milliken's Bend Facts for Kids. Kiddle Encyclopedia.