Under the Bielski partisans' protection, 1,236 Jews survived the war. This was one of many remarkable rescue missions in the Holocaust. The group spent more than two years living in the forests and was initially organised by members of the Bielski family.

The Bielski family were millers and grocers in Stankiewicze (Stankievichy) near Nowogródek. At the beginning of WWII, this area belonged to the Second Polish Republic. It was taken over by the Soviet Union in September 1939 (cf. Polish September Campaign and Soviet invasion of Poland) as part of an agreement between Nazi Germany and Josef Stalin's Soviet Union that they would not fight each other.

The Bielski family served as low-level administrators in the new government set up by the Soviets. This made many local Poles unhappy, because they saw the Soviets as occupiers.

On 22 June 1941, Nazi Germany began Operation Barbarossa and invaded the Soviet Union. Nowogródek became a Jewish ghetto. The Nazis took over and began their genocidal policies in Poland and Belarus.

The Bielski's parents and older family members were killed in the ghetto on 8 December 1941. The four Bielski brothers - Tuvia, Alexander (also known as "Zus"), Asael, and Aron Bielski - managed to escape to the nearby forest. Together with 13 neighbours from the ghetto, they formed their partisan combat group in the spring of 1942. Originally, about forty people were in the group, but it grew quickly.

The oldest brother, Tuvia, was the group's commander. Tuvia had served in the Polish Army from 1927 to 1929, rising to the rank of corporal. He had been interested in the Zionist youth movement. He sent people to sneak into the ghettos in the area, recruiting new members to join the group in the Naliboki Forest. Hundreds of men, women and children eventually found their way to the Bielski camp. At its largest, 1,236 people belonged to the group. Seven out of every ten members were women, children, or elderly. No one was turned away. About 150 group members used weapons to fight the Nazis and the people who cooperated with them.

The partisans lived in underground dugouts (zemlyankas) or bunkers. In their forest camp, they built many things, including:

Members of the group did many different jobs. For example:

The group also set up a school in one of the dugouts. The camp even had its own jail and court of law.

Some accounts say that poor members of the group were not treated as well as richer members.

The Bielski group's partisan activities were aimed at the Germans and their collaborators (people who cooperated with the Nazis, like Belarusian volunteer policemen or local residents who had betrayed or killed Jews). The group also used sabotage to fight the Nazis. The Nazi regime offered a reward of 100,000 Reichsmarks to anyone who could help them catch Tuvia Bielski. In 1943, the Nazis led major efforts to get rid of all partisan groups in the area. Some of these groups suffered major casualties, but the Bielski partisans fled safely to a deeper part of the forest, and continued to offer protection to the non-fighters among their band.

Like other partisan groups in the area, the Bielski group would raid nearby villages and force people to give them food. Sometimes, peasants who refused to share their food with the partisans were attacked or even murdered. This made many of the peasants in the villages angry at the Bielski partisans, though some would willingly help the Jewish partisans.

The Bielski partisans eventually teamed up with Soviet groups around the Naliboki Forest under General Platon (Vasily Yefimovich Chernyshev). Soviet commanders tried several times to get Bielski fighters to join their units, but they refused. Tuvia continued to command the Bielski partisans. This allowed him to continue in his mission to protect Jewish lives along with engaging in combat activity. However, it would also cause problems later on.

The Bielski partisan leaders split the group into two units, one named Ordzhonikidze, led by Zus, and the other Kalinin, commanded by Tuvia. Fighting on the Soviet side, they took part in fights between Polish and Soviet forces. On 1 December 1943, they helped the Soviets disarm a group of Polish partisans. According to records kept by the partisans, the Bielski fighters from both units claimed to have killed a total of 381 enemy fighters, sometimes during joint actions with Soviet groups.

In the summer of 1944, the Soviets began to fight back against the Nazi occupiers in Belarus, and took over the area. At this pint, the Kalinin unit, which included 1,230 men, women and children, came out of the forest and marched into Novogrodek.

Even though they have previously worked and cooperated with the Soviets, relations between the Soviets and the Bielski partisans got worse quickly. The NKVD started interrogating the Bielski brothers about the rumours of loot they had reportedly collected during the war, and about their failure to "implement socialist ideals in the camp". Asael Bielski was conscripted into the Soviet Red Army and fell in the Battle of Königsberg in 1945. The remaining brothers escaped Soviet-controlled lands, emigrating to the West. Tuvia's cousin, Yehuda Bielski, was sought by the NKVD for having been an officer in the pre-war Polish Army. However, with Tuvia's help, he managed to escape to Hungary, then to Israel. 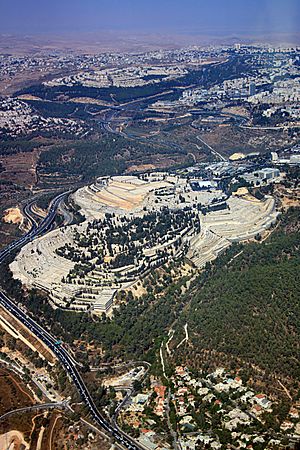 After the war, Tuvia Bielski returned to Poland, then emigrated to present-day Israel in 1945. Tuvia and Zus eventually settled in New York, where they ran a successful trucking business. When Tuvia died in 1987, he was buried in Long Island, New York. However, a year later, surviving partisans in Israel got his body to be exhumed (taken out of the ground). He was given a hero's funeral at Har Hamenuchot, the hillside graveyard in Jerusalem. His wife, Lilka, was buried beside him in 2001.

The last living Bielski brother, Aron Bielski, emigrated to the US in 1951. He changed his name to "Aron Bell." The remainder of the Bell family now lives in upstate New York and California. Aron lives in Florida. None of the Bielskis ever sought any praise or reward for their actions.

Yehuda Bielski, their first cousin and fellow partisan, moved to Israel to fight in the Irgun.

Two recent English language books have focused on the Bielski story: Defiance (1993) by Nechama Tec, and The Bielski Brothers (2004) by Peter Duffy. The group is also mentioned in numerous books about this period in history. A new book (January 2009) in Polish by two reporters from Gazeta Wyborcza, Odwet: Prawdziwa historia braci Bielskich (Revenge: The True Story of the Bielski Brothers) focuses on the larger political and historical context in which the partisans operated, specifically the fighting between Polish and Soviet resistance groups in the Kresy (former Eastern Poland) region. Fugitives of the Forest: The Heroic Story of Jewish Resistance and Survival During the Second World War, by Allan Levine (first published 1998, 2008 reissue, by Lyons Press), tells the story of Jewish fighters and refugees in forests across Europe, including the Bielski partisans. With Courage Shall We Fight: The Memoirs and Poetry of Holocaust Resistance Fighters Frances "Fruma" Gulkowich Berger and Murray “Motke” Berger tells the story of two Bielski Brigade fighters before, during and after the War.

In 2006, the History Channel aired a documentary titled The Bielski Brothers: Jerusalem in the Woods, written and directed by filmmaker Dean Ward.

An episode of the BBC series Who Do You Think You Are? featured UK television personality Natasha Kaplinsky discovering that her great uncle Ytsak Kaplinski was a member of the Bielski partisans. He survived the war and emigrated to South Africa.

The feature film Defiance, co-written, produced and directed by Edward Zwick, was released nationwide on 16 January 2009. It stars Daniel Craig, Liev Schreiber, Jamie Bell, and George MacKay as Tuvia, Zus, Asael and Aron Bielski respectively. It opened to mixed reviews and raised questions about the roles various groups played during the war.

All content from Kiddle encyclopedia articles (including the article images and facts) can be freely used under Attribution-ShareAlike license, unless stated otherwise. Cite this article:
Bielski partisans Facts for Kids. Kiddle Encyclopedia.