Bishop's Castle is a small market town in the southwest of Shropshire, England, and formerly its smallest borough. According to the 2011 Census it had a population of 1,893.

Bishop's Castle is 1.5 miles (2.4 km) east of the Wales-England border, about 20 miles (30 km) north-west of Ludlow and about 20 miles (30 km) south-west of Shrewsbury. To the south is Clun and to the east is Church Stretton. The town is within an agricultural area and has also become known for its alternative community including artists, musicians, writers and craftspeople. The surrounding area is hillwalking country and Bishop's Castle is a "Walkers are Welcome Town", gaining the award in 2008. The long distance footpath the Shropshire Way runs through the town and Offa's Dyke is only a few miles to the west.

The ancient trackway of the Kerry Ridgeway, a prehistoric Bronze Age route, runs from the town. The BC Ring, a 60-mile (100 km) challenging route around the town, was published in 2008. The town has two micro-breweries, including the Three Tuns, the UK's oldest brewery.

Documented history begins in Saxon times for Bishop's Castle when Edwin Shakehead, grateful for being miraculously cured of the palsy at Saint Ethelbert's tomb in Hereford Cathedral gave part of his lands to the incumbent Bishop of Hereford. A successive Bishop of Hereford built a castle, originally a motte and bailey design, in 1087 to defend the church and village from the threat of the Welsh, . The castle has been under attack several times, not always by Welsh raiders, most notably in 1263 when John Fitzalan, 6th Earl of Arundel and Lord of Oswestry and Clun, held it under siege and caused significant damage, estimated at 1,060 marks.

In the Early Middle Ages the castle and parish were situated partly in Wales and partly in England so territorial disputes literally 'came with the territory'.

In 1557 the castle was described as follows: "thirteen rooms covered with lead, a tower on the outer wall on the eastern side containing a stable, and two rooms covered with tiles. There were two other rooms called 'le new buyldinge' situated on the outer wall between the building over the gate and the tower called 'le prison tower'. There was also a dovecote, a garden, a forest and a park."

As peace came to the Welsh Marches Bishop's Castle became one of the notorious rotten boroughs, an electorally corrupt situation wherein the tiny borough elected two members of parliament from 1585.

In 1618 the castle started to deteriorate and in the 1700s the stone keep and surroundings were flattened to make a bowling green, (Some historians believe that the houses along Market Square and Castle Street were built upon the foundations of an outer wall due to the curvature of the houses).

In 1642, the Three Tuns Brewery was established on its current site, making it the oldest licensed brewery site in Britain. While some of the current building dates to the seventeenth century, the main building is a Victorian tower brewery erected about 1888.

In 1719 – the fifth year of the reign of George I and the year Daniel Defoe published Robinson Crusoe – the Castle Hotel was constructed over the site of the old baille [the French word for an enclosed court] of the ancient castle. It was built on the orders of a local landowner, James Brydges (1673–1744), who in the year the hotel was completed was created Duke of Chandos. In an age of unabashed corruption, he acquired a number of lucrative sinecure offices and amassed such wealth that he was known as 'Princely Chandos'.

The 1st Duke of Chandos sold the Castle Hotel to John Walcot who in turn sold it to Robert Clive, 1st Baron Clive of Plassey (1725–1774), known as 'Clive of India', who amassed such wealth during his time in that country that Horace Walpole writing from London to a country friend said: ‘you will be frightened by the dearness of everything ... I expect that a pint of milk will soon not be sold under a diamond, and then nobody can keep a cow but my Lord Clive’. From Viscount Clive the hotel descended to his son, Edward, and then to his grandson, who changed the family name to Herbert, his mother's maiden name. Edward became Earl of Powis on the death of his brother-in-law, George Herbert, 2nd Earl of Powis (of the previous creation of that title).

Local landowners, including Robert Clive expended large sums of cash buying votes, a common practice at the time in some areas to ensure a seat in Parliament. In 1726 one unsuccessful parliamentary candidate was subsequently able to prove that of the 52 people voting for his rival, the incumbent MP, 51 had received bribes and inducements. The Reform Act 1832 eradicated this practice and Bishops Castle was disenfranchised.

All that is physically left of the castle today is a 10 m long, coursed stone wall on the west side of the castle site which is 2 m thick and 3 m high. It was overgrown with ivy and was recently renovated to keep it safe and stable. The Castle Hotel stands on the site of the castle itself and is largely built of stone salvaged from the original castle.

The layout of the town in the present day shows that originally the town was made up of 46 burgage plots which were separated by a few small lanes which have developed to be Church Street, Union Street and Station Street.

In 1249 a Royal Charter for a weekly market and an annual fair was granted. They are both still very popular, although the Friday market is closed while the town hall is being refurbished.

In the 1600s, the town hall was constructed as a new administrative centre, a court and possibly a prison. It has recently been refurbished thanks to a Lottery grant and was re-opened in June 2014. The refurbished town hall now provides a venue for local events and formal meetings of the Town Council.

The town was classified as a municipal borough in 1885. It lost this status in the 1960s, but still has a mayor and its regalia. It is now a "Quality Town Council".

Bishop's Castle was close to the epicentre of a magnitude 5.1 earthquake on 2 April 1990, which was felt throughout much of England and Wales.

Today the town forms a civil parish, with its own town council and mayor.

The town is located close to the Shropshire Hills Area of Outstanding Natural Beauty. 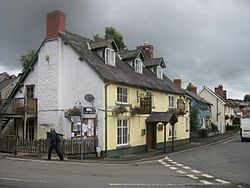 Facilities for residents and tourists include coffee houses, cafés and restaurants, the House on Crutches, a museum of country life, the Rail & Transport Museum, two micro-breweries, the old cattle market in the centre of the town, and a variety of shops, local businesses and services ranging from clothes shops to the usual high street banks. The town is notable for a thriving selection of specialist retailers.

There are several public houses in the town, and two micro-breweries: the Six Bells Brewery painted yellow, and the Three Tuns Brewery. Additionally, the town sports a number of restaurants and Bed and Breakfasts, and a hotel, The Castle Hotel, built on the site of the outer bailey of the old Bishops Castle. Sights in the town include Bishop's Castle Town Hall, the House on Crutches Museum and the town's two breweries. Many properties are painted in various colourful hues of blue, pink, yellow and green which are reflected on the Wintles, a new neighbourhood of energy efficient eco-houses built by Living Villages.

Bishop's Castle has been on a main route for travellers since prehistoric times, although the town was bypassed in the 19th century by Thomas Telford's great road. The inns would have provided accommodation for travellers and have stabled their horses.

There is no main road running through the town, though the A488 runs north-south just to the east of the town, on its way from Shrewsbury, Pontesbury and Minsterley to Clun and Knighton. The B4385 runs around the town and connects with the A488.

Bishops Castle had a railway, the Bishops Castle Railway, between 1865 and 1935. Originally it was meant to go from Craven Arms to Montgomery, but that speculation failed due to lack of finance. Sections of the old railway can still be seen today, including some of the embankments, bridges and stations. Today the nearest station is Broome on the Heart of Wales Line.

There is a limited daytime bus service (552/553) on Mondays to Saturdays between Bishops Castle and Shrewsbury Bus Station.

All content from Kiddle encyclopedia articles (including the article images and facts) can be freely used under Attribution-ShareAlike license, unless stated otherwise. Cite this article:
Bishop's Castle Facts for Kids. Kiddle Encyclopedia.