At the Lake Superior mouth of the Black River is Black River Harbor, a former fishing station where commercial fishermen brought in cargoes of lake trout. The North Country Trail crosses the river here via a suspension footbridge.

The Wild and Scenic River section of the Black River of Gogebic County is known for the many waterfalls produced as the river tumbles down from near Copper Peak to Lake Superior. The river drops more than 200 feet (61 m) over five separate named cataracts beginning two miles (3.2 km) from its mouth.

The first three named falls are smaller, farther apart, and have limited access. Some of these waterfalls are easily accessible from the parallel County Road 513 (Black River Road) north of Bessemer, while other waterfalls require a more strenuous hike to see. Roadside trails provide access to Gorge Falls and Potawatomi Falls. The Black River Road was named a National Forest Scenic Byway in 1992. The trails to two of the Black River waterfalls, Gorge and Potawatomi, have been designated National Recreation Trails due to their unique stairway designs (to provide easier access down the steep slopes) and observation platforms.

The first three waterfalls on the Black River as it approaches Lake Superior are Narrows Falls, Chippewa Falls, and Algonquin Falls. They are the three smallest named waterfalls on the river. Narrows and Algonquin Falls are technically rapids or cascades. Chippewa Falls drops nearly 10 feet (3.0 m) over boulders and dead tree limbs. These area have limited access and are not often visited. 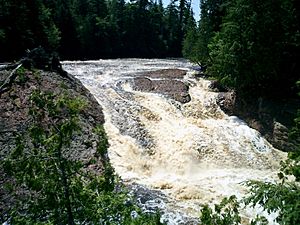 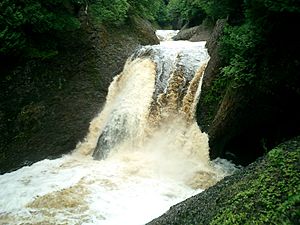 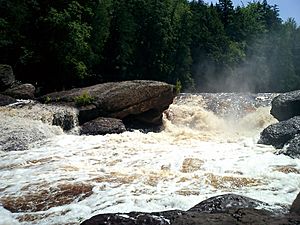 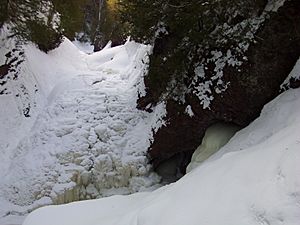 Rainbow Falls is the northernmost waterfall on the Black River, less than one mile (1.6 km) from Lake Superior. It is also the highest. Here, the water drops 45 feet (14 m) down into a rocky gorge. The waterfall creates much mist, which, on sunny days, creates a constant rainbow. The approach to this waterfall is strenuous: 200 steps are built on staircases and into the side of the hill, creating a very steep approach. 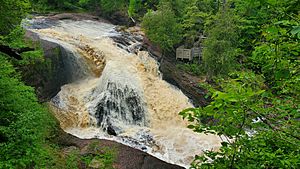 All content from Kiddle encyclopedia articles (including the article images and facts) can be freely used under Attribution-ShareAlike license, unless stated otherwise. Cite this article:
Black River (Gogebic County) Facts for Kids. Kiddle Encyclopedia.