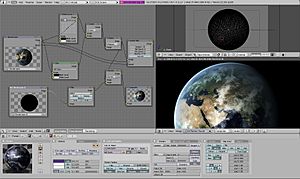 A picture of the program.

Blender is a free, open source 3D computer graphics program. It is available for many operating systems, for example Microsoft Windows, macOS and Linux. It is made by the Blender Foundation. It was used, for example, to make the short movies Elephants Dream, Big Buck Bunny and Sintel.

A Dutch animation studio called NeoGeo created Blender as an in-house application. The song Yello, which is from a song album called Baby, started an idea of the name "Blender". Ton Roosendaal discovered NaN in June of 1998. He wanted to make and show off the program to the public. The program was published as shareware until NaN went bankrupt in 2002. The creditors, people who have other people oweing money to them, agreed to sell out Blender under the laws of the GNU General Public License in exchange for a one-time payment of 100,000 Euros (102,000 in U.S. dollars.) On July 18, 2002, Roosendaal put money into a Blender funding campaign—in order to collect donations. On September 7, 2002, the collected funds was given notice to the public. This proved that the Blender source code would be published. Blender is now an open source program. Right now, the Blender Foundation watches and takes care of it. It is the Blender Foundation's responsibility to do such a thing. The Blender Foundation have the right to use dual licensing, so that, in addition to GNU GPL, Blender would also have the permission to use the following name: "Blender License". Blender License does not have a rule that says it needs a disclosing source code but it does have a rule on payments to the Blender Foundation. On the other hand, this choice was never used and became null in 2005. Right now, Blender belongs only to GNU GPL.

Blender has many features and tools, such as:

All content from Kiddle encyclopedia articles (including the article images and facts) can be freely used under Attribution-ShareAlike license, unless stated otherwise. Cite this article:
Blender (program) Facts for Kids. Kiddle Encyclopedia.