The Boeing X-37 Advanced Technology Demonstrator is an unpiloted demonstration spaceplane that is intended to test future spaceflight technologies while in orbit and during atmospheric reentry. It is a reusable robotic spacecraft based on the smaller X-40. The X-37 began as a NASA project in 1999, then was transferred to the US Department of Defense in 2004. The X-37 had its first flight as a drop test in April 2006 at Edwards AFB. The spacecraft was launched in April 2010 to begin a United States Air Force mission.

In 1999, NASA chose Boeing to design the vehicle. The vehicle was built at the California branch of Boeing's Phantom Works. At the end of 2002, a new $300 million contract was awarded to Boeing in the framework of NASA’s Space Launch Initiative.

The X-37 was transferred from NASA to the Defense Advanced Research Projects Agency in September, 2004. The program has become a secretive, though it is not known whether DARPA will maintain this status for the project.

March 2006 was scheduled for the X-37's first free flight but a snow storm covered the area, dropping snow on the Mojave. The next flight attempt in March was canceled due to high winds. In late March the X-37 flew, but a flaw prevented the free flight and the vehicle returned to the ground still docked with its White Knight carrier. In April 2006, the X-37 made its first free glide flight. During landing the vehicle ran off the runway. After the vehicle was repaired, the program moved from Mojave to Air Force Plant 42 (KPMD) in Palmdale, California for the remainder of the flight test program. White Knight continued to be based at Mojave, but would ferry over to Plant 42 when flights were scheduled. Five additional flights were performed, at least one of which is believed to have been a free flight with a successful landing. 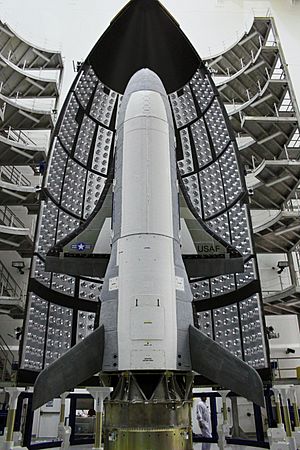 X-37B being prepared for launch

The Secretary of the Air Force states the OTV program will focus on "risk reduction, experimentation, and operational concept development for reusable space vehicle technologies, in support of long term developmental space objectives."

The X-37B was originally scheduled for launch in the payload bay of the Space Shuttle, but following the Columbia accident, it was transferred to a Delta II. It was then transferred to the Atlas V following concerns over the spacecraft's aerodynamic properties during launch.

The first orbital flight of the X-37B, was launched on an Atlas V rocket at Cape Canaveral Air Force Station, Florida in April 2010. The spacecraft was placed into low Earth orbit for testing, and then will land at Vandenberg Air Force Base, California .

A second X-37B is being manufactured for a test mission scheduled for 2011.

The X-37 was originally designed to be carried into orbit in the Space Shuttle cargo bay, but underwent redesign for launch on a Delta IV or comparable rocket after it was determined that a shuttle flight would be uneconomical.

This vehicle has the potential to become the United States' first operational military spaceplane, after the cancellation of Dyna-Soar in 1963. It is expected to operate in a velocity range of up to Mach 25 on reentry. Among the technologies to be demonstrated with the X-37 are improved thermal protection systems, avionics, the autonomous guidance system, and an advanced airframe. The on-board engine is the Rocketdyne AR-2/3, which is fueled by hydrogen peroxide and JP-8.

The X-37's aerodynamic design was derived from the Space Shuttle, hence the X-37 has a similar lift-to-drag ratio, and a lower cross range at high altitudes and mach numbers than the Hypersonic Technology Vehicle.

The test vehicle, which was used as an atmospheric drop test glider, had no propulsion system. Instead of an operational vehicle's payload bay doors it had an enclosed and reinforced upper fuselage structure to allow it to be mated with a mothership. Most of the thermal protection tiles were 'fake', made of inexpensive foam rather than ceramic; a smaller number of the X-37's tiles were actual TPS tiles, and TPS blankets were used in areas where heating would not have been severe enough to require tiles.

Following their missions, X-37B spacecraft are to land on a runway at Vandenberg Air Force Base, California with Edwards Air Force Base as an alternate site.

All content from Kiddle encyclopedia articles (including the article images and facts) can be freely used under Attribution-ShareAlike license, unless stated otherwise. Cite this article:
Boeing X-37 Facts for Kids. Kiddle Encyclopedia.