The Boonshoft Museum of Discovery is a children's museum, science and technology center and zoo in Dayton, Ohio, United States that focuses on science and natural history. Exhibits include an extensive natural history collection as well as maintaining a collection of live animals native to Ohio and abroad. Educational outreach extends to the community by providing in-school programming and on-site special programs. SunWatch Indian Village and Fort Ancient are the sister sites to the museum.

In 1991 the museum added a Digistar II Planetarium to its facilities.

In March 2013, the Dayton Society of Natural History opened a satellite version of their main museum, called the Boonshoft Museum of Discovery Springfield, in an approximately 4000-square-foot space in the Upper Valley Mall near Springfield, moving to 20,000 square feet in the former Elder-Beerman space in November. On March 25, 2016, the Dayton Society of Natural History announced that it would close this satellite museum; it did so on April 30.

Science On a Sphere is a 68-inch-diameter (1.7 m) globe, suspended in mid-air, capable of showing dynamic visualizations of Earth and space. It also has the capability of showing commercial air traffic around the world while presenting other things such as turtle migrations.

Hall of the Universe is an exhibit where interactive learning can take place about the solar system. Also contains the Exoplanet Exploration exhibit.

Explorers Crossing consists of a play veterinary clinic, recycling center and landfill, pizza kitchen, car repair shop, and more where children can learn, role play, and interact with hundreds of different pieces to learn more about associated topics within each setting. 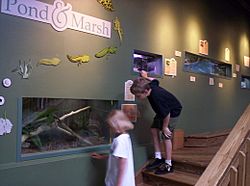 Children in the Discovery Zoo exhibit

Nesiur the Mummy
is an exhibit that contains a mummy donated to the museum from Egypt, and other African pieces.

Mead Tree House is a fully enclosed tree house where children can learn about environmental preservation and use binoculars to do bird watching through windows within the tree house.

The Tidal Pool is an exhibit that contains live marine invertebrates native to the Pacific Northwest, such as starfish. The exhibit is run by a museum employee or volunteer.

The Bieser Discovery Center is an exhibit that contains thousands of real specimens such as animal skeletons, shells, and fossils. Also located in the exhibit are live snakes, including a burmese python. Along with these things are many science related children's books.

The Discovery Zoo is an indoor zoo that is fully accredited by the Association of Zoos and Aquariums (AZA) that showcases mammals, reptiles, birds, and amphibians with special adaptations for survival. The Discovery Zoo is home to over 150 animals including a Linne's two-toed sloth, bat-eared foxes, North American river otters, African meerkats, and more recently a Mertens's water monitor named Nessie. Although the museum does not itself rehabilitate injured animals, many of the animals, including the zoo's Virginia opossum, came to the zoo after being injured in the wild and rehabilitated elsewhere, and would be unable to survive on their own. Two otters currently live in the zoo, and are part of a national breeding program; their names are Eno and Sikwa. The Discovery zoo was renovated in 2010 to expand its capacity and recreate a new style to the zoo. The project also included the addition of around 18 new species of animals to the zoo. The Boonshoft Museum of Discovery is one of only four museums in the United States that are accredited as an official zoo. The renovation project came at a cost of $1 million.

The Boonshoft Museum of Discovery is a popular spot for school field trips. In addition to school field trips, the museum has a program called Exhibits-To-Go which are a set of exhibits that can be taken directly to school classrooms in the Dayton area.

In 2010, NASA awarded more than $800,000 to the Boonshoft Museum of Discovery for the creation of an Exoplanet Exploration exhibit.

Along with the museum's permanent exhibits, there are also traveling exhibits that are commonly presented at the museum.

In the wake of the 2016 closure of the satellite museum at the Upper Valley Mall, the Dayton Society of Natural History had considered relocating the Boonshoft Museum of Discovery Springfield into a building on South Fountain Avenue in downtown Springfield. The society estimated it would have needed to raise $2 million for building renovations and $2 million for an endowment to operate the satellite. Renovations were to begin in early 2017, with reopening expected in late 2017 or early 2018. In July 2016 the society decided against this location because of the cost and the short timeframe for fundraising. The society and Springfield leaders reported that they were still working together to find another location. In 2017 some renovations and exhibits were moved and changed. Notably the courthouse and grocery store were removed, the pizza kitchen was moved where the court house was, a shape shop was opened and the Vet Hospital was moved to the old grocery store and expanded. In late 2018 and early 2019 renovations on the lobby, restrooms and education labs will begin.

All content from Kiddle encyclopedia articles (including the article images and facts) can be freely used under Attribution-ShareAlike license, unless stated otherwise. Cite this article:
Boonshoft Museum of Discovery Facts for Kids. Kiddle Encyclopedia.