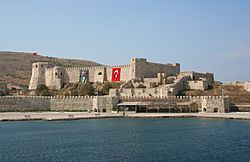 Bozcaada is an island in Aegean Sea. It is the third largest island of Turkey. Bozcaada is also a district of Çanakkale Provience. Bozcaada has 2,500 inhabitants. The main economical activities are tourism and fishing. The island is well known for its grapes and wines. 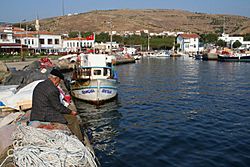 All content from Kiddle encyclopedia articles (including the article images and facts) can be freely used under Attribution-ShareAlike license, unless stated otherwise. Cite this article:
Bozcaada Facts for Kids. Kiddle Encyclopedia.