Priory Church of St Mary, Bridlington, , commonly known as Bridlington Priory Church is a parish church in Bridlington, East Riding of Yorkshire, England, in the Diocese of York. It is on the site of an Augustinian priory founded in 1113 which was dissolved during the Dissolution of the Monasteries. In 1951 it was designated a Grade I Listed Building.

Bridlington Priory was founded around 1113 by Walter de Gant, for Augustinian Canons Regular, one of the earliest Augustinian houses in England, with an adjoining convent. Its foundation was confirmed in charters by King Henry I of England The site had formerly been a Saxon church and nunnery. When complete, the building was over 400 ft long (120 m) and 75 ft wide (23 m), with a transept which was 150 ft long (46 m). The first prior is thought to have been called Guicheman or Wickeman.

The priory was favoured by kings and their nobles and soon owned land across Yorkshire. The Canons from the priory established Newburgh Priory in 1145. King Stephen granted that the priory should have the right to have the property of felons and fugitives within the town and proceeds from the harbour, and later King John gave the priory the right to hold a yearly fair in the town in 1200. During the conflict between Stephen and Matilda, William le Gros, Earl of Albemarle (a Manor in Holderness which is now ‘lost’) advanced on the priory and expelled the canons in his campaign against Gilbert de Gant of Hunmanby. He fortified the priory and later gave the priory six parcels of land, one at Boynton and the rest in Holderness. Henry IV appropriated the rectory of Scarborough to the priory which was later confirmed by Henry V, Henry VI and Edward IV. A royal licence was also granted by Richard II in 1388 to crenellate the priory with fortifications but although history tells there were four gates, 3 of those gates were in the main priory land, Kirk Gate, West Gate, Nun Gate and these were used as daily entrances in and out of the building enclosure itself. Only the Baylegate was a fortified entrance standing at the borders and the Priory itself was in fact never walled. The priory also had a large library, which was listed by John Leland shortly before the dissolution.

Dissolution of the Monasteries

The priory was dissolved in 1538 by Henry VIII during the Dissolution of the Monasteries. The priory was very wealthy at the time of the dissolution and its yearly income was estimated to be £547 6s. 11½d, and owned land stretching from Blubberhouses in the north, and Askham Richard, down to the Spurn Point. 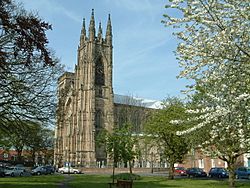 Bridlington Priory from the south-west

The condition of the priory at the dissolution can be gathered from the report of Richard Pollard, a surveyor of Henry VIII. The Church was more than 390 feet in length, surrounded by the Chapter House, Treasury, Cloister, Prior's Hall, Infirmary. The quire of the mediaeval church contained woodwork by the celebrated William Brownflete (or Bromflete) who had made the stalls in Beverley Minster, Manchester Cathedral and Ripon Cathedral and a number of churches under the patronage of Lady Margaret Beaufort, including Gresford and Mold churches, and the chapel of St John's College, Cambridge. All the buildings were destroyed except the nave which became the parish church and the gatehouse, which is now the Bayle Gate Museum. Some of the stones from the old priory were used in the construction of the piers at Bridlington. The last Prior, William Wode, was executed at Tyburn for his part in the Pilgrimage of Grace.

For three centuries after the dissolution, the nave continued to be used as the parish church and only a third of the building was actually used by the congregation. From 1846 the parish began to raise funds to restore the church and it was partially re-roofed; the west window was opened out and filled with stained glass; the interior was white-washed; and the east window also was filled with stained glass. This work was carried out by the Lancaster partnership of Paley and Austin, but their work was not to the satisfaction of the church authorities. Around 1874 the church employed Sir George Gilbert Scott to completely refurbish the church as it is today. The total cost of the restoration was about £27,000.

The organ was built in 1889 by the Belgian organ builder Charles Anneessens. Various adjustments were made in the 20th century, before it was restored and enlarged between 2004 and 2006 by Nicholson. It has been recorded a number of times and is played by Daniel Moult in the film and recording Virtuoso! Music for Organ.

People connected to the Priory

All content from Kiddle encyclopedia articles (including the article images and facts) can be freely used under Attribution-ShareAlike license, unless stated otherwise. Cite this article:
Bridlington Priory Facts for Kids. Kiddle Encyclopedia.