Calais is a town in Washington County, Vermont, United States. The population was 1,607 at the 2010 census. Calais is homophonous with callous. Calais contains the unincorporated communities of Adamant, East Calais, North Calais, Kent's Corner, Maple Corner and Pekin. 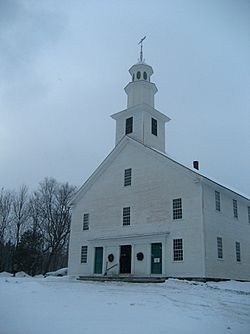 Colonel Jacob Davis named Calais after the French port city of the same name, during a time of general enthusiasm for things French as a result of France's aid during the American Revolution.

The Wheelocks and Parkers were the first families to settle the town, in the latter part of the 18th century. In the early and mid 19th century, the Vermont wool industry spawned sheep pastures in the town. Photographs of the time show a heavily de-forested Calais. Like many small Vermont towns, Calais was devastated by the Civil War. Volunteers from Calais flocked to the Union cause, most serving in the Army's volunteer regiments. In the post-Civil War era, agriculture turned from sheep to dairy, and new families came to fill farms that were sold by the families and widows of Civil War veterans.

Calais once had a village called Sodom. This name was allegedly given because the village had no church, though it did have a few active quarries. In 1905, the residents petitioned the state legislature to change the name to Adamant, chosen to suggest the hardness of granite.

Pekin is named after Peking (now Beijing), China, the result of a local farmer who had a friend who was a missionary to China. The missionary sent some Chinese wheat back to Vermont, the farmer planted it, and it flourished. It became the style to give directions using the wheat field as a landmark ("up by the Pekin wheat", or "just past the Pekin wheat"). Eventually, the location of the field came to be known simply as Pekin. Another version suggests that the missionary sent back rice, and that the farmer planted the rice in a low-lying plain, which flooded each spring. The river came to be known as Peking Brook, later and presently Pekin Brook.

The following bodies of water are within the town: Curtis Pond, Nelson Pond, Bliss Pond, and #10 Pond, also known as Mirror Lake.

There were 616 households, out of which 34.7% had children under the age of 18 living with them, 57.3% were married couples living together, 6.8% had a female householder with no husband present, and 32.0% were non-families. 24.0% of all households were made up of individuals, and 6.8% had someone living alone who was 65 years of age or older. The average household size was 2.48 and the average family size was 2.98.

All content from Kiddle encyclopedia articles (including the article images and facts) can be freely used under Attribution-ShareAlike license, unless stated otherwise. Cite this article:
Calais, Vermont Facts for Kids. Kiddle Encyclopedia.