Caldwell County is a county located in the U.S. state of Kentucky. As of the 2010 census, the population was 12,984. Its county seat is Princeton. The county was formed in 1809 from Livingston County, Kentucky and named for John Caldwell, who participated in the George Rogers Clark Indian Campaign of 1786 and was the second lieutenant governor of Kentucky. Caldwell was a prohibition or dry county until 2013, when the citizens voted to lift the ban. 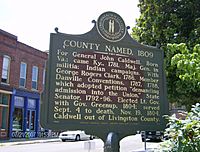 In the early nineteenth-century, Caldwell County witnessed the passage of the forced migration of the Cherokee to the West on the Trail of Tears during Indian removal. The Cherokee camped for several weeks in Caldwell County during the winter of 1838, mainly at Big Springs, now in downtown Princeton; at Skin Frame Creek, and in the Centerville area near Fredonia.

In 1860, the construction of Princeton College began, but it was delayed by the Civil War. Confederate troops camped on the grounds of Princeton College in 1861, using one of its buildings as a hospital. Following the Confederate retreat in early 1862, however, Union soldiers occupied Princeton for the remainder of the war. In December 1864, raiding Kentucky Confederate cavalry commanded by General Hylan B. Lyon burned the Caldwell County courthouse in Princeton, since it was being used to house the Union garrison.

The expansion of railroads in the late nineteenth century made Princeton an important junction on several major railway lines, most notably the Illinois Central and the Louisville & Nashville.

By the turn of the century, an agricultural boom in dark leaf tobacco had made Caldwell County, along with Christian County, a major tobacco growing area. However, the monopolization of the tobacco market by James B. Duke left many farmers in debt and discontented. Under the leadership of Dr. David Amoss of Cobb in Caldwell County, a vigilante force called the Night Riders was formed to combat the Duke monopoly. The Night Riders terrorized those who cooperated with the tobacco company by destroying crops, burning warehouses, and even physical intimidation. The Night Riders took over Princeton one night in December 1906, burning all of the Duke tobacco warehouses. The "Black Patch Wars" came to an end around 1908.

In the mid-twentieth century, Caldwell County began to shift from agriculture to industrialization. Caldwell County is still largely agricultural, however it is also home to factories such as Bremner, who are the largest private cookie and cracker factory in North America.

All content from Kiddle encyclopedia articles (including the article images and facts) can be freely used under Attribution-ShareAlike license, unless stated otherwise. Cite this article:
Caldwell County, Kentucky Facts for Kids. Kiddle Encyclopedia.