Carlyle House is a historic mansion in Alexandria, Virginia, United States, built by Scottish merchant John Carlyle in 1751–53. It is situated in the city's Old Town on North Fairfax Street between Cameron and King Streets. 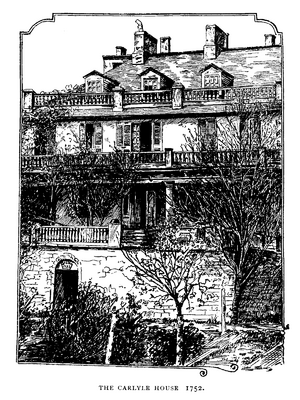 1909 drawing of the Carlyle House

When the lots for the new town of Alexandria were auctioned in July 1749, Carlyle purchased lots 41 and 42, situated between the Potomac River and the town's market square, ideal for his merchant business. He began construction of a house in 1751, using indentured and slave labor. The home was built in mid-Georgian style with space for entertaining and private family and servant use. He also built a number of outbuildings for both household and business needs. Carlyle and his wife, Sarah née Fairfax, moved into the house on 1 August 1753, the day Sarah gave birth to Carlyle's first son, William. Carlyle or someone associated with the house's construction is believed to have sealed the body of a cat within the house's foundation for good luck, a custom that was prevalent in the British Isles and northern Europe. The cat's remains were discovered during restoration work in the 1970s.

In 1755, the house was the initial headquarters for Major-General Edward Braddock in the Colony of Virginia during the French and Indian War. The Congress of Alexandria convened in the dining room of the house and here Braddock decided to make an expedition to Fort Duquesne which would result in his death. He was urged not to undertake the expedition by native Virginian George Washington who was then a volunteer aide-de-camp to Braddock. Braddock first suggested the idea of levying additional new taxes on the colonists to help with the cost of the war at the house.

Carlyle was a slaveholder. Carlyle's slaves lived and worked in his Alexandria home, on three plantations and in a foundry located on the same lot as the house. When he died in 1780, there were nine slaves living at Carlyle House: Moses, Nanny, Jerry, Joe, Cate, Sibreia, Cook, Charles and Penny. In the colonial period, as many as twenty-five slaves might have lived and worked within its walls and in the various outbuildings.

Following Carlyle's death in 1780, his son George William Carlyle inherited the house. However, he died one year after his father at the Battle of Eutaw Springs in South Carolina. The son of John Carlyle's eldest daughter Sarah Carlyle Herbert, John Carlyle Herbert, inherited the Carlyle House in 1781. The house passed from the family's possession by 1827 when Sarah Carlyle Herbert died and John Carlyle Herbert sold it to pay off an uncle's gambling debt. He himself had moved to Maryland in the first decade of the 19th century. A wealthy Alexandria merchant, John Lloyd, owned extensive tracts of real estate both in and outside of town, and ended up acquiring possession of the Carlyle House. Not successful in selling the property, Lloyd offered the structure as a possible site for the new city and county courthouse to be constructed in Alexandria in 1838. This proposal was rejected and Lloyd continued to lease the premises to a number of renters until it was sold to James Green, the owner of Green and Brother Furniture Factory, a noted Alexandria furniture manufacturer in 1848.

By 1860 Carlyle House owner James Green completed many major renovations to the Carlyle House. He also created a hotel in front of the house known as the Mansion House Hotel, which was known as one of the best hotels on the East Coast. With the building of the hotel fronting Fairfax Street, the Carlyle House was no longer visible from the street. At the onset of the Civil War, Union troops occupied the city of Alexandria, including the Mansion House Hotel, converting it to a hospital for Union soldiers, after the Battle of Bull Run.

After Green's death in 1880, the hotel and the Carlyle House along with it, changed hands frequently. It was not until 1906, when the buildings were bought by Earnest Wagar, that a major restoration of the house as an historic site was commenced.

Significant restoration work to the house was undertaken in the early and mid 1970s. In 1969, the decision was made by the Northern Virginia Regional Park Authority to acquire and restore the property as a public national historic site. A survey of the site and existing buildings was initiated in October, 1970. On July 17, 1970, the Authority acquired the Carlyle Apartments for $305,000. The house itself was purchased for $193,000 in 1971 and the remaining portion of the land for $210,000 the following year. The restoration of the house and gardens was then directed by Beth R. Sundquist, project director, under the supervision of the Authority's executive director, William M. Lightsey. The project involved tearing down the apartments (also known as the Braddock Hotel), once again exposing Carlyle House to North Fairfax Street, and then turning the mansion itself into an 18th-century museum. This meant not only rehabilitating the structure as authentically as possible, but also tracking down and purchasing original fixtures and furniture, where possible, or acquiring equivalent examples from the period. About a dozen pieces believed to have been in the house during the Carlyle family's occupancy were recovered by the time the house was opened to the public on January 23, 1976. 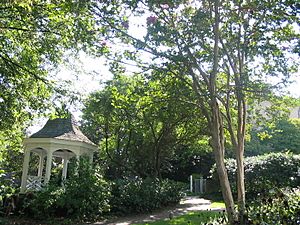 Gardens of the Carlyle House

The Carlyle House Historic Park is owned, protected, and operated by the NOVA Parks agency of Northern Virginia.

Opening in 1970, the park includes the 18th-century mansion and its gardens, listed on the National Register of Historic Places. It is architecturally unique as the only stone 18th-century Palladian Revival style residence in Alexandria.

The "Grandest Congress" is a reenactment celebrating General Braddock's time at the house that takes place every year at the Carlyle House.

All content from Kiddle encyclopedia articles (including the article images and facts) can be freely used under Attribution-ShareAlike license, unless stated otherwise. Cite this article:
Carlyle House Facts for Kids. Kiddle Encyclopedia.