Carl Linnaeus (23 May 1707 – 10 January 1778) was a Swedish botanist, physician and zoologist who created the binomial nomenclature. In this system, every kind of animal and plant is given a name consisting of two Latin words, for its genus and species. This became used by biologists all over the world, so he is known as the "father of modern taxonomy". He was a good linguist, and famous in his time. He was made a noble by the Swedish king.

Carl was born in Sweden. He was going to be a priest, but did not do well enough in school for that. Instead, Carl studied at a college for botany because he liked it. He studied in Lund and tried to improve the garden there. He later went to another college..

In 1733 Linnaeus met Sara Lisa Moraeus and dressed up in the traditional Sami kolt to impress on her, but her father didn't want to give her away in marriage before Linnaeus earned his degree in medicine and could prove that he could earn enough money for a family.

In 1735 Linnaeus moved to the Netherlands, for three years. Here he earned his degree in medicine. He also published his book on plant classification.

Later he moved to Stockholm and practiced as a doctor.

Throughout the 1740s he conducted many field trips to places in Sweden to name plants and animals. When not on travels, Linnaeus worked on his classification, so it would work for plants, animals, and minerals.

After he was made a noble, he continued teaching and writing. His reputation had spread over the world, and he talked with many different people. Linnaeus was upset by weak health, and he had gout and tooth aches. A stroke in 1774 weakened him, and two years later he had another, losing the use of his right side. He died on January 1778 and was buried in Uppsala cathedral.

The von Linné name ended with his son Carl, who never married. His other son, Johannes, had died aged 3. There are over two hundred descendants of Linnaeus through two of his daughters. 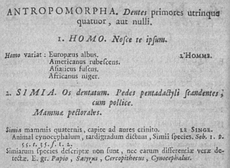 Linnaeus classified man as among the primates, which was already well understood by anthropologists like Blumenbach and natural historians like Buffon. It attracted the criticism of the Swedish church. The Lutheran Archbishop of Uppsala accused him of "impiety".

Linnaeus recognised four races in the human species. These were European whites, American reds (Native Americans), Asian browns, and African blacks. Blumenbach's classification was similar, with the addition of a Mongolian (= Chinese) or yellow race. Thus recognition of man's position as a primate and the existence of races was quite widespread before the theory of evolution was formulated.

All content from Kiddle encyclopedia articles (including the article images and facts) can be freely used under Attribution-ShareAlike license, unless stated otherwise. Cite this article:
Carl Linnaeus Facts for Kids. Kiddle Encyclopedia.