The Cathedral Church of Saint Matthew, known simply as St. Matthew's Cathedral, is an Episcopal cathedral church located at 5100 Ross Avenue in Dallas, Texas, in the United States.

The cathedral is the official seat of the Bishop of the Episcopal Diocese of Dallas and is sometimes called the mother church of the diocese. It is listed by the Texas Historical Commission as a historic landmark.

St. Matthew's Church was the third church formed in the city of Dallas. Reverend George Rottenstein conducted the first Episcopal church service in Dallas, May 25, 1856, on the second floor of a general store. At the time, Dallas was a town of about 400 people. The small congregation grew, and Rev. Rottenstein submitted Articles of Association to the Episcopal Church for the creation of the Episcopal Church of Saint Matthew to be effective September 21, 1857. The articles were ratified at the General Convention.

On July 8, 1860, a fire consumed most of the businesses on the town square as well as the rented facilities and all church belongings and records of Saint Matthew's. The fire has been attributed to abolitionists by several historians. When the Right Rev. Alexander Gregg, first bishop of Texas, visited Dallas in October 1860, he found no church building, no records, and only six communicants. Bishop Gregg gave assistance to the small congregation so that the parish could continue.

The parish recovered and grew such that by 1870, the parish had enough funds for the construction of its own church. The church bell was added later that same year. 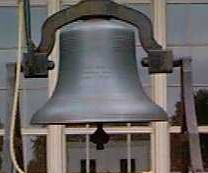 As the city grew, it became necessary to move the church to another location. In 1877, the structure was put on heavy rollers pulled by oxen. However, the building collapsed. Parishioners, with the help of other citizens, carried the boards by hand to the new location and built a new church.

In 1893, the congregation constructed a fine new stone cathedral on the corner of Elm and Lamar, but within a few years the growing industrious city encroached. Train tracks were laid nearby, and one of the railroads operated noisy steam engines that arrived at a nearby station at noon each Sunday. Smoke from the train would fill the church on any given Sunday.

At that same time, Saint Mary's Episcopal College for Women was facing substantial financial struggles as new schools opened in the city. The Vestry chose to relocate the Cathedral to the corner of Ross and Henderson and assume the debt of St. Mary's College. The cathedral moved into its current location in July 1929. The Wall Street Crash of 1929 occurred in October, and the Cathedral, like its parishioners and citizens of Dallas, suffered greatly.

The Cathedral Church of Saint Matthew remains at the Saint Mary's campus. The former chapel for the college was expanded and continues as the cathedral for the Diocese of Dallas today. The tree-lined college campus is now the cathedral close and the facilities house a beautiful collection of stained-glass windows dating from the late 19th century. 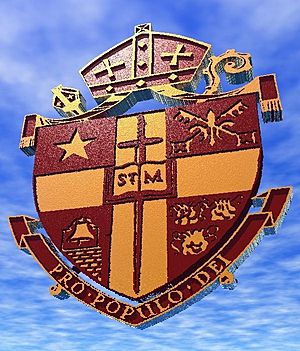 The shield of Saint Matthew's Cathedral

In addition, the cathedral houses a notable collection of Victorian era paintings, many of which were gifts to Saint Mary's Episcopal College for Women, and feature Saint Mary.

The congregation is heavily involved in ministries and outreach to the surrounding community. The cathedral serves the homeless and other needy through the Food Pantry and Country Fair resale shop. It also hosts the Aberg Center for literacy which provides tuition free instruction along with free childcare to adults working toward their GED, citizenship, reading, writing, social studies, science, math, and computer skills, as well as people wanting to learn English and Spanish. The Bishop's Camp is a day camp held each summer that provides a safe, healthy, Christian environment for over 100 children ages 5 to 14 in the neighborhood. Under the supervision of certified teachers, volunteers spend time in the mornings reading with each child. In addition, teachers provide classes in math, science, arts and crafts, and music. Summer in the City teams (see below) provide a daily chapel as well.

Working alongside the Bishop’s Camp is the Summer in the City program for youth groups both in the Diocese of Dallas and beyond. These young people spend a week during the summer living at the Cathedral and serving in urban ministries throughout the City of Dallas. The Bishop Stanton Center for Ministry Formation trains candidates for ministry as Deacons, bi-vocational priests in rural areas, youth ministers, cross-cultural formation, lay preachers and general enrichment in lay theological formation. The cathedral conducts mission trips to Peru annually where visitors assist churches in Peru with their growth needs. The program allows Spanish speakers and English speakers to come together for some wonderful ministry experiences. Angel Tree provides Christmas gifts for children and the elderly who might have no one to remember them.

Schools within the Cathedral

The cathedral directs The Right Reverend James M. Stanton Center for Ministry Formation, whose primary mission is to serve people who feel called to the Diaconate; both to aid them in their discernment process and to provide the necessary theological training for possible ordination as deacons. The Cathedral Center is a place where deacons-in-training can be part of a community, attend graduate-level classes, and experience spiritual growth. The school also trains bi-vocational priests to serve in rural areas, youth ministers, training in cross-cultural awareness, as well as a variety of lay licensing classes and general classes to allow lay people to study the Bible, theology, and church history at a deeper level than is usually available in a local church setting.

The cathedral is the seat of the Bishop of Dallas. The Rt. Rev. George Sumner was elected as the Seventh bishop for the Diocese of Dallas during a Special Convention in May 2015. His consecration was Nov. 14, 2015. As bishop he oversees the administrative needs throughout the diocese and is chief pastor for more than 31,000 Episcopalians, 200 clergy and 100 congregations.

In 2018, the cathedral vestry called The Very Reverend Robert P. Price to be the new dean. Dean Price holds a bachelor's degree and a master's degree in History from Stanford University, and began a Ph.D. program in History at Yale University before answering a call to the ministry and entering Yale Divinity School, from which he holds a Master of Divinity degree.

The cathedral usually has several assisting priests and deacons, many of whom are canons of the cathedral. 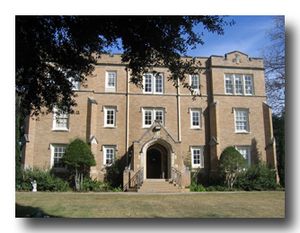 There are several groups and guilds headed by lay people.

The church is part of the Episcopal Church USA and worship services are based on the 1979 Book of Common Prayer. There are a number of important worship services, such as the Solemn Mass of Easter and Midnight Mass at Christmas. While most of the services are High Church other services are more Broad church in style. Located in East Dallas, its congregation represents the diversity of East Dallas. In addition, the 12:30pm Sunday is in Spanish.

Music is an important element at the cathedral, which boasts a pipe organ with an estimated 2,800 pipes. The organ has been expanded several times and now features three manuals, 35-40 stops (depending on the method used to count them) and around 40 ranks of pipes. The cathedral has hosted various festivals of music with renowned musicians over the years, including such local talent as concert organists James Diaz and Bradley Welch. The current Director of Music and Arts, and principal organist, is Michie Akin. Mr. Akin is assisted by long-time assistant organist and choirmaster Jim Stillson, who is also a local pipe-organ builder.

On Sundays, the cathedral holds three worship services with Mass, the third service of the day is conducted in Spanish.

Weekday services are held in the Oratory Chapel, with Morning Prayer each morning at 8:45am, and Evening Prayer from the Daily Office each evening at 6pm. Noonday Prayer is offered on the last Saturday of each month. 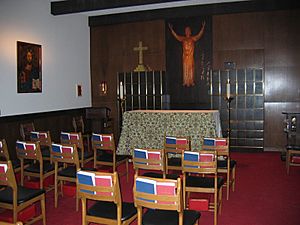 The Oratory with the Columbarium against the reredos

The cathedral is also host of several diocesan services and events including ordinations, confirmations, conventions, annual vergers’ conferences as well as a variety of retreats for religious and civic groups.

In addition, the cathedral hosts for the community a number of civic events each year, including plays, dances, festivals, and summer camps for youth. The St. Matthew's Cathedral Arts was formed in 2012 "to emulate the historic ministry of cathedral churches, proclaiming the presence of God through the beauty of human creativity, positioning this cathedral as a center for arts, culture and community, bringing vitality to St. Matthew’s, our neighborhood and greater Dallas."

The cathedral is located in East Dallas and experiences all the challenges and opportunities of the inner city. The neighborhood continuously evolves. A large Hispanic community has grown in the area for the past several decades. In 1982, the Cathedral began a worship service in Spanish. This congregation has grown to an average Sunday attendance of 25-300. In addition, developers are purchasing portions of land in the area and building expensive apartment and condominium complexes. The cathedral close is near downtown, and is part of a transitional neighborhood located between two upscale neighborhoods that is home to first and second-generation immigrants, and a variety of transitional and homeless people. As a result, there is a great range of population characteristics evident in the congregation. The cathedral is known for its offerings to a wide range of people. 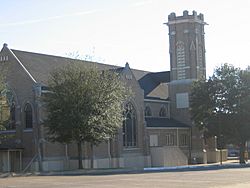 Southwest view showing the 1907 portion of the building

The church is constructed in the Gothic Revival. The college chapel, dating from 1907, was designed in the traditional shape of a Latin cross. In 1929, the chapel was enlarged to hold the large congregation of the cathedral, changing the proportions of the traditional cross configuration. Prior to the expansion, the bell tower was located at the northwest corner of the structure. Today, the tower occupies a site on the north faḉade. The interior of the three-story bell tower is very small with a ladder and openings that permit only a person of small stature to enter. Cornerstones, plaques, and stained glass windows from the earlier locations of the cathedral are incorporated around the cathedral close.

The central stained-glass window of Saint Mary's Episcopal College for Women was the Nativity scene, and on each side of it are windows relating to patron saints of women. Rather than replace these windows with the cathedral's patron Saint Matthew, a stained-glass window of Saint Matthew was installed in the south transept. Many of the windows came from prior structures and were installed in the 1970s. Other windows depict the Resurrection, the Stations of the Cross, the sacraments, and the founding fathers of the church. Because of the church's location in Texas, some windows contain unusual images, such as cowboys, Native Americans, and a stagecoach.

The oratory and Great Hall are in the modern style, the Oratory contains a columbarium.

The Great Hall, constructed in 1955, holds a large parish hall with stage and two industrial kitchens. When the cathedral moved to its present location, it brought the Great Matthew Bell that dates from 1870. It was recast to its present size of 1,500 lb (680 kg) in 1888. Because the bell tower could not hold the immense bell and it was placed on a bell-cot that incorporates an 1899-plaque marking the 25th anniversary of the cathedral. The cot is located adjacent to the Great Hall. 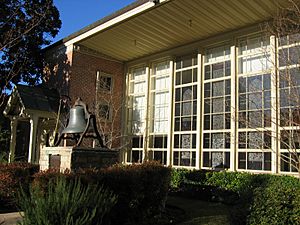 The Great Hall and Bell cot 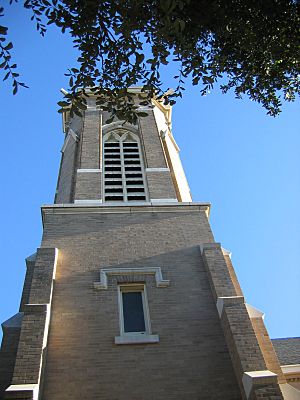 Close-up view of the tower.

The foyer of the Great Hall contains several stained glass works, including a Tiffany window from the previous cathedral.

All content from Kiddle encyclopedia articles (including the article images and facts) can be freely used under Attribution-ShareAlike license, unless stated otherwise. Cite this article:
Cathedral Church of Saint Matthew (Dallas) Facts for Kids. Kiddle Encyclopedia.