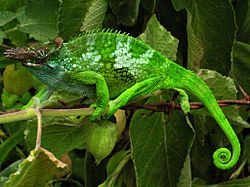 Chameleons are a family of lizards. Most can change the colour of their skins for camouflage, or to signal mood to other chameleons.

They are a distinct clade of lizards. They have parrot-like zygodactylous feet, separately mobile and stereoscopic eyes, very long tongues they can flick out, a swaying gait, their prehensile tail, crests or horns on their strange-shaped heads, and many can change colour.

There are about 160 species, living in Africa, Madagascar, Spain and Portugal, across south Asia, Sri Lanka. They have been introduced to Hawaii, California and Florida, and are found in warm habitats that vary from rain forest to desert conditions. Chameleons are often kept as household pets.

Chameleons have long sticky tongues that they can fire out in a fraction of a second. They stretch up to twice their body size. Their eyes can move independently. The largest species is about 1.5 feet when fully grown. They are mainly insectivores, but they do take occasional smaller lizards.

Chameleons are adapted for climbing and visual hunting. They live in warm habitats that range from rain forest to desert conditions, with various species occurring in Africa, Madagascar, southern Europe, and across southern Asia as far as Sri Lanka. They also have been introduced to Hawaii, California, and Florida, and often are kept as household pets.

The world's tiniest chameleon has been found on Madagascar. At 2.9 cm, it is one of the world's smallest lizards.

Genetic analysis proved there are four different species of this tiny animal. 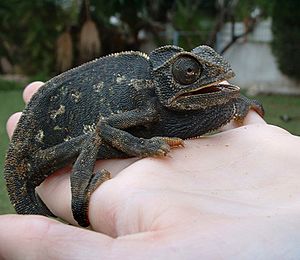 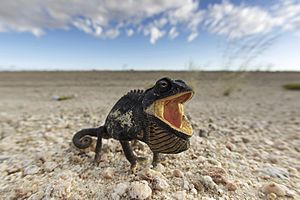 Namaqua chameleon in threat display, Namib-Naukluft National Park, turned black and opened its mouth, when an attempt was made to move it off a busy road.

Some chameleon species are able to change their skin coloration. Different chameleon species are able to vary their coloration and pattern through combinations of pink, blue, red, orange, green, black, brown, light blue, yellow, turquoise, and purple. Chameleon skin has a superficial layer which contains pigments, and under the layer are cells with guanine crystals. Chameleons change color by changing the space between the guanine crystals, which changes the wavelength of light reflected off the crystals which changes the color of the skin.

Color change in chameleons has functions in camouflage, but most commonly in social signaling and in reactions to temperature and other conditions. The relative importance of these functions varies with the circumstances, as well as the species. Color change signals a chameleon's physiological condition and intentions to other chameleons. Chameleons tend to show brighter colors when displaying aggressively to other chameleons, and darker colors when they submit or "give up".

Some species, such as Smith's dwarf chameleon, adjust their colors for camouflage in accordance with the vision of the specific predator species (bird or snake) by which they are being threatened.

The desert-dwelling Namaqua chameleon also uses color change as an aid to thermoregulation, becoming black in the cooler morning to absorb heat more efficiently, then a lighter grey color to reflect light during the heat of the day. It may show both colors at the same time, neatly separated left from right by the spine.

For a long time it was thought that chameleons change color by dispersion of pigment-containing organelles within their skin. However, research conducted in 2014 on panther chameleons has shown that pigment movement only represents part of the story.

Chameleons have two superimposed layers within their skin that control their color and thermoregulation. The top layer contains a lattice of guanine nanocrystals, and by exciting this lattice the spacing between the nanocrystals can be manipulated, which in turn affects which wavelengths of light are reflected and which are absorbed. Exciting the lattice increases the distance between the nanocrystals, and the skin reflects longer wavelengths of light. Thus, in a relaxed state the crystals reflect blue and green, but in an excited state the longer wavelengths such as yellow, orange, green, and red are reflected.

The skin of a chameleon also contains some yellow pigments, which combined with the blue reflected by a relaxed crystal lattice results in the characteristic green color which is common of many chameleons in their relaxed state. The deeper layer of skins works in a similar fashion but primarily controls the amount of near-infrared light that is absorbed or reflected, and therefore may influence thermoregulation. 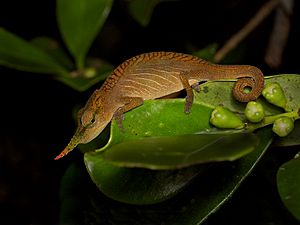 The oldest known chameleon is Anqingosaurus brevicephalus from the Middle Paleocene (about 58.7–61.7 mya) of China.

The chameleons are probably far older than that, perhaps sharing a common ancestor with iguanids and agamids more than 100 mya (agamids being more closely related). Since fossils have been found in Africa, Europe and Asia, chameleons were certainly once more widespread than they are today.

Although nearly half of all chameleon species today live in Madagascar, this offers no basis for speculation that chameleons might originate from there. In fact, it has recently been shown that chameleons most likely originated in mainland Africa. It appears there were two distinct oceanic migrations from the mainland to Madagascar. The diverse speciation of chameleons has been theorized to have directly reflected the increase in open habitats (savannah, grassland, and heathland) that accompanied the Oligocene period. Monophyly of the family is supported by several studies.

Chameleons have the most distinctive eyes of any reptile. The upper and lower eyelids are joined, with only a pinhole large enough for the pupil to see through. Each eye can pivot and focus independently, allowing the chameleon to observe two different objects simultaneously. This gives them a full 360-degree arc of vision around their bodies. Prey is located using monocular depth perception, not stereopsis. Chameleons have very good eyesight for reptiles, letting them see small insects from a 5–10 meter distance. In fact, chameleons have the highest magnification (per size) of any vertebrate.

Like snakes, chameleons do not have an outer or a middle ear, so there is neither an ear opening nor an eardrum. However, chameleons are not deaf: they can detect sound frequencies in the range of 200–600 Hz.

Chameleons can see in both visible and ultraviolet light. Chameleons exposed to ultraviolet light show increased social behavior and activity levels, are more inclined to bask and feed, and are also more likely to reproduce, as it has a positive effect on the pineal gland. 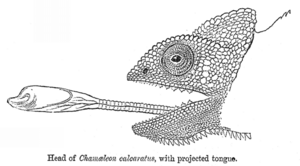 All chameleons are primarily insectivores that feed by ballistically projecting their long tongues from their mouths to capture prey located some distance away. While the chameleons' tongues are typically thought to be one and a half to two times the length of their bodies (their length excluding the tail), smaller chameleons (both smaller species and smaller individuals of the same species) have recently been found to have proportionately larger tongue apparatuses than their larger counterparts. Thus, smaller chameleons are able to project their tongues greater distances than the larger chameleons that are the subject of most studies and tongue length estimates, and can project their tongues more than twice their body length.

Tongue projection occurs at extremely high performance, reaching the prey in as little as 0.07 seconds, having been launched at accelerations exceeding 41 g. The power with which the tongue is launched, known to exceed 3000 W kg−1, exceeds that which muscle is able to produce, indicating the presence of an elastic power amplifier to power tongue projection. The recoil of elastic elements in the tongue apparatus is thus responsible for large percentages of the overall tongue projection performance. 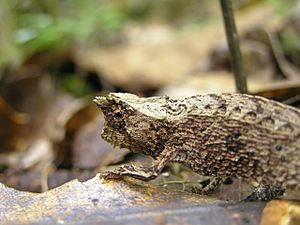 The 30 species of chameleons in the genus Brookesia are tiny, usually brown-colored and mainly terrestrial.

Chameleons primarily live in the mainland of sub-Saharan Africa and on the island of Madagascar, although a few species live in northern Africa, southern Europe, the Middle East, southern India, Sri Lanka, and several smaller islands in the western Indian Ocean. There are introduced, feral populations of veiled and Jackson's chameleons in Hawaii, and isolated pockets of feral Jackson's chameleons have been reported in California and Florida.

Chameleons inhabit all kinds of tropical and mountain rain forests, savannas, and sometimes deserts and steppes. The typical chameleons from the subfamily Chamaeleoninae are arboreal, usually living in trees or bushes, although a few (notably the Namaqua chameleon) are partially or largely terrestrial. Most species from the subfamily Brookesiinae, which includes the genera Brookesia, Rieppeleon, and Rhampholeon, live low in vegetation or on the ground among leaf litter. Many species of chameleons are threatened by extinction. Declining chameleon numbers are due to pollution and deforestation.

Chameleons generally eat insects, but larger species, such as the common chameleon, may also take other lizards and young birds. The range of diets can be seen from the following examples:

All content from Kiddle encyclopedia articles (including the article images and facts) can be freely used under Attribution-ShareAlike license, unless stated otherwise. Cite this article:
Chameleon Facts for Kids. Kiddle Encyclopedia.