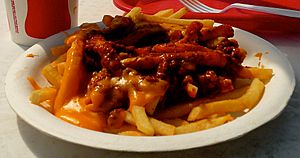 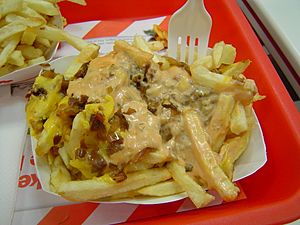 'Animal Fries' consisting of cheese, grilled onions, and spread on a regular order of fries at In-N-Out Burger, part of their "secret" menu.

Cheese fries are an American fast-food dish, consisting of French fries covered in cheese with the possible addition of various other toppings.Cheese fries are generally served as a lunch or dinner time meal.They can be found in fast food locations, dinners, and grills all across the United States as well as the rest of the world.

The dish originated in the United States, although it's exact birthplace is still widely disputed. Cheese fries have been said to grow in popularity in the United States after canned cheese products such as Cheez Whiz hit the U.S. markets in 1952[SITE]. Don A. Jenkin is said to have invented a variation of the cheese fry (the chili cheese fry), at the age of 16 in Tomball Texas. Austin Ruse's from Missouri claims to be the first to serve this dish when working at Dairy Queen.

The most common method of making cheese fries involves pouring melted cheese onto a plate of fries. To do this:

Throughout the Southwest US, cheese fries are often covered in melted cheddar cheese, bacon bits, jalapeño slices, and chives and served with ranch dressing. Alternately, they are also served as carne asada fries. In Philadelphia, pizza fries are topped with melted mozzarella and served with pizza sauce on the side, while "Mega Fries" are topped with Cheddar (or sometimes Cheez Whiz) and mozzarella cheese and bacon. Usually served with a side of ranch dressing. In New York City, Long Island, and New Jersey they are covered with American, Mozzarella, or Swiss cheese, then melted. In New Jersey and certain New York City diners, Disco Fries are fries served with Mozzarella and brown gravy. In other parts of the US, nacho cheese is often used, especially in snack-stand type settings.

In Ireland a variation called "Taco Fries" consists of fresh cut chips covered in sub sauce and shredded cheddar. Piled on top of the cheese are ground beef, tomato, peppers, onions, and various seasonings. In Bulgaria, a common side dish offered in most restaurants consists of French fries, topped with grated or crumbled sirene. In the Netherlands a dish named 'kapsalon' is served as fast food. This consist of fries covered with cheese, salad and shawarma or doner kebab. It is often consumed with large amounts of garlic sauce or chili sauce. In the United Kingdom chips and cheese are often served in pubs. Preparation includes the pouring of cheddar sauce over chips or sprinkling cheddar over chips and then putting the dish under a grill.

All content from Kiddle encyclopedia articles (including the article images and facts) can be freely used under Attribution-ShareAlike license, unless stated otherwise. Cite this article:
Cheese fries Facts for Kids. Kiddle Encyclopedia.