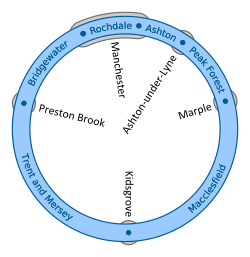 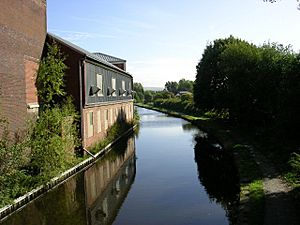 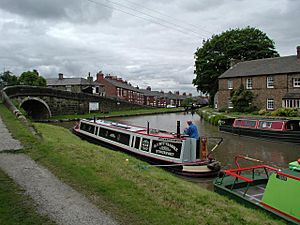 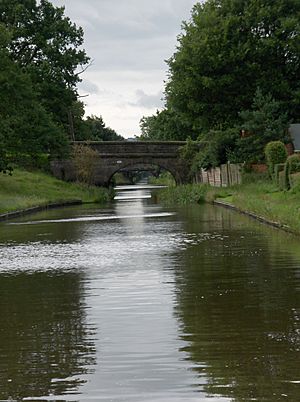 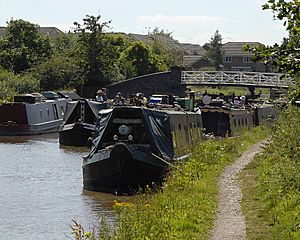 Just to the Northwich side of the Big Lock, Middlewich 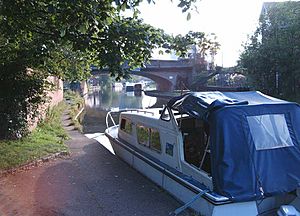 The Cheshire Ring is a canal cruising circuit or canal ring, which includes sections of six canals in and around Cheshire and Greater Manchester in North West England: the Ashton Canal, Peak Forest Canal, Macclesfield Canal, Trent and Mersey Canal, Bridgewater Canal and Rochdale Canal.

Because it takes boats approximately one week to complete the circuit, it is suited to narrowboat holidays that start at and return to the same location. The route has 92 locks and is 97 miles (156 km) long. It passes through contrasting landscapes between Manchester city centre and rural Cheshire with views of the Peak District and the Cheshire Plain.

The term "Cheshire Ring" first appeared in the Inland Waterways Association (IWA) Bulletin in 1965, where it was coined as part of a campaign to prevent the abandonment of, and restore navigation to, part of what had been known as the Peak Forest Circular Route between Manchester and Marple. When commercial carrying declined after the Second World War, sections of the Rochdale, Ashton and Peak Forest Canals that make up the urban part of the ring had gradually fallen into disuse, and by the early 1960s were impassable, with little depth of water and many locks in an unusable condition. There was a risk that the canals would be abandoned, and infilled, as they were becoming stinking eyesores. Perseverance by the IWA and the Peak Forest Canal Society paid off, and on 1 April 1974, following restoration, the ring was re-opened to navigation.

In 2002, as part of the restoration of the Rochdale, ownership of the Rochdale Canal Company passed to the Waterways Trust, and British Waterways became the navigation authority, bringing to an end the £35 toll that had been charged to use the one-mile section through Manchester which had deterred some boats from attempting the ring.

Since 1977, a marathon-style 96-mile (154 km) race has been organized called the Cheshire Ring Race. Traversing five canals, it starts and finishes at Higher Poynton on the Macclesfield Canal. Participation is open to individual paddlers, crew boats and relay teams. The race is held under the aegis of Macclesfield And District Canoe Club (MADCC).

Canals and places on each (clockwise from Ducie St Junction, just north of Manchester Piccadilly station):

All content from Kiddle encyclopedia articles (including the article images and facts) can be freely used under Attribution-ShareAlike license, unless stated otherwise. Cite this article:
Cheshire Ring Facts for Kids. Kiddle Encyclopedia.