Newton Hall was present in the 13th century. The area formed a township of the parish of St Mary, Stockport. Its name is derived from the Hide, a measure of land for taxation purposes, taken to be that area of land necessary to support a peasant family. In later times it was taken to be equivalent to 120 acres (49 ha). In the late 18th century the area that was to become the town centre was no more than a cluster houses known as Red Pump Street. Gee Cross was much larger and 'Hyde' was still only used to refer to the estates of Hyde Hall on the banks of the River Tame. Altogether there were only 3,500 inhabitants in the district in 1801. The town is largely a creation of the 19th century and the Industrial Revolution. 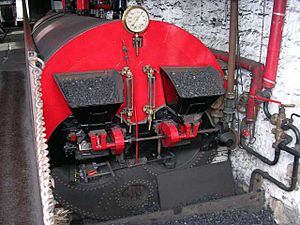 The population of Hyde increased due to the success of the cotton mills during the Industrial Revolution of the late 18th and early 19th centuries, at one stage there were 40 working mills. By 1872 only 27 remained, half of the remaining mills closed between 1921 and 1939 and there is only one working mill in the town today. There were many mill owning families, including the Sidebotham, Hibbert and Horsfield families. The main employers in the mills were the Ashton family who successfully ran a combined spinning and weaving company. Most mills concentrated on one process only. The Ashton family built Hyde Chapel on Stockport Road, Gee Cross. The Ashton Brothers' Mill has recently been demolished to make way for a housing estate.

St George's Church was built in 1832 as a chapel of ease to St Mary's, Stockport. It was built at the instigation of John Hyde Clarke of Hyde Hall and was the first Church of England place of worship in the town. St George's became the parish church of part of Hyde township in 1842. Later additions include the lychgate, boathouse by the canal, hearse house, parish rooms and numerous vicarages. The church has a 110-foot (34 m) tower housing eight bells and a clock.

The Peak Forest Canal was constructed through Hyde from Ashton-under-Lyne to Woodley, Romiley and Marple. Captain Clarke's Bridge, originally named Wood End Canal Bridge is situated at the end of Woodend Lane. The bridge was erected before Captain Clarke rose to prominence and therefore probably became known as Captain Clarke's Bridge after he retired and resided there.

There was also a coal mine, known as Hyde Colliery, in the town and in January 1889 an explosion there killed 23 miners. There was an enquiry held the following month at the town hall. See http://www.cotswan.com/edward_jackson.htm for an account of part of the enquiry. The following month Ardwick AFC, modern day Manchester City, played Newton Heath, modern day Manchester United, under floodlights at Belle Vue to raise money for the victims' families. The game was watched by 10,000 people and this was the first floodlit match played by either side. 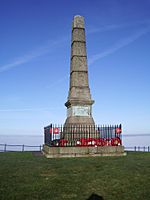 Hyde is separated from Denton by the River Tame, a tributary of the River Mersey. There are several areas and suburbs in Hyde, these include, Gee Cross, Newton, Hattersley, Godley, Flowery Field, Kingston, Mottram in Longdendale, Hollingworth and Broadbottom. 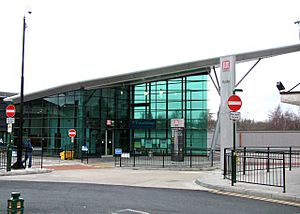 Hyde is served by the M67 motorway, which is a feeder to the M60 which is the orbital motorway for Manchester and is connected to many other motorways that serve across the country.

A tram network operated by the SHMD Joint Board ran lines through Hyde from 1904 to 1945, until their replacement by buses. The second-generation tramway Manchester Metrolink currently terminates at nearby Ashton-under-Lyne for connections to the city centre.

Hyde has a recently refurbished leisure centre which contains a large swimming pool with a wave machine, the new 'Red Ripster' aqua slide and an upstairs fitness suite. The pool also has a new changing village and a new cafe and air conditioned eating area. The octagon shaped structure which has been open since the '90s, is situated next to the neighbouring Hyde United F.C. ground. Hyde also has its own Air Cadet Organisation (ACO), Part of a UK-wide cadet force with more than 40,000 members aged 13–20 and are sponsored by the Royal Air Force. The works of No 468 (Hyde & Hattersley) Squadron can be viewed at 468 Air Cadets Squadron. Also Hyde Library has a gallery called the 'Rutherford Gallery', which is exhibiting the work of Harry Rutherford, an artist who was from the Tameside area.

Hyde United F.C. was formed in 1919 and changed its name to Hyde FC in 2010, as a result of a sponsorship deal with Manchester City, and back to Hyde United in 2015. Hyde United entered the annals with the greatest ever competitive defeat in English Football on 15 October 1887 by losing 26 - 0 to Preston North End at Deepdale. The club plays its home games at Ewen Fields. The ground has been used by Manchester City and Manchester United for their reserve team fixtures; in 2010, Manchester City F.C. Reserves and Academy moved in. They used the facility as their permanent home until 2015, when a purpose-built academy stadium was opened on the campus at the Etihad Stadium. A notable appearance for Hyde United F.C. was in the FA Cup - in the 2017–18 season, they made a first round appearance in the FA Cup where they lost 4–0 to Milton Keynes Dons FC. 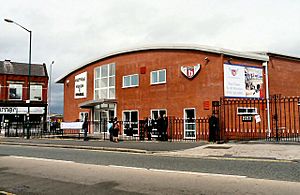 World champion boxer Ricky Hatton was brought up on the Hattersley Estate and now lives in Gee Cross. He who fought against Floyd Mayweather Jr. and Manny Paqcuiao but lost on both occasions. Overall his record is at an outstanding 45-3 and had a record at one point of 43–0. His association with the town led to the creation of a boxing gym and health club by Hatton Promotions.

The Hyde Seal Swimming & Water Polo Club dominated water polo and swimming in England in the early years of the 20th century.

Hyde Cricket and Squash Club play in the Cheshire County League and have their ground near Werneth Low. Flowery Field Cricket Club are part of the Lancashire County League. Professional cricketer Len Hopwood was born in Newton. 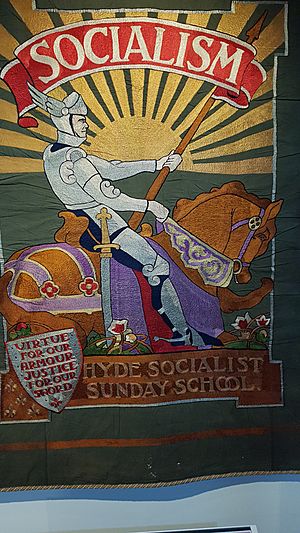 Below is a list of all the primary schools in the Hyde area: Gee Cross Holy Trinity Primary School

Below is a list of all the secondary schools in the Hyde area:

Tameside College and Clarendon Sixth Form College used to be located in Hyde but have since moved to Ashton-under-Lyne.

The following individuals were born in Hyde or lived in the town:

All content from Kiddle encyclopedia articles (including the article images and facts) can be freely used under Attribution-ShareAlike license, unless stated otherwise. Cite this article:
Hyde, Greater Manchester Facts for Kids. Kiddle Encyclopedia.