Denton is a town in the Metropolitan Borough of Tameside, Greater Manchester, England, five miles (8 km) east of Manchester city centre. Historically part of Lancashire, it had a population of 36,591 at the 2011 Census.

Denton probably derives its name from Dane-town, an etymology supported by other place names in the area such as Danehead-bank and Daneditch-bourne. The word 'Dane' is itself derived from Anglo-Saxon denu, dene, daenland, meaning a valley. So literally Denton means valley town.

A Byzantine coin was discovered in Danesheadbank, dating from the sixth or seventh century, as part of the Denton coin hoard. The early medieval linear earthwork Nico Ditch passes through Denton; it was probably used as an administrative boundary and dates from the 8th or 9th centuries. A 300 m stretch is still visible on Denton golf course, about 4 m wide and 1.5 m deep.

In the early 13th century it lay within the Manor of Withington, a feudal estate which also encompassed the townships of Withington, Didsbury, Chorlton-cum-Hardy, Moss Side, Rusholme, Burnage and Haughton, ruled by the Hathersage, Longford, Mosley and Tatton families.

Felt hatting was recorded in Denton as early as 1702 and Denton gained supremacy in the hatting industry towards the end of the 19th century. The increasing importance of Denton and Haughton as centres of felt hat production is demonstrated by the increase of manufacturers in the area: in 1800 there were 4 hatting firms in Denton and Haughton, but by 1825 there were 25 manufacturers, making it the third largest hat making centre in the north west. By 1840, 24,000 felt hats were produced in Denton a week. The prosperity of the hatting industry is reflected in the growth of the town from 2,501 in 1801 to 6,759 in 1841.

During the 1840s, the felt hat industry went into depression; the recession affected Denton, with wages in the area falling by 35% and only 12 hat manufacturers remaining in Denton. The depression was partially due to changes in fashion away from felt towards silk hats. The revitalisation of the felt hat industry came in the 1850s, once again on a whim of fashion but also the increased use of machinery led to reduced production costs. The resurgence was demonstrated by the doubling of the number of hat manufacturers in the town between 1861 and 1872. At its peak in the Edwardian period, Denton's felt hat industry was the largest felt hat manufacturing centre in Britain. There were 36 firms directly involved in the felt hat making industry. In 1907 the majority of the 16,428,000 felt hats made in England (worth £2,068,000) were made in Denton and Stockport. In 1921, the working population of Denton was 9,653 with about 41% of those people in occupations related to the hatting industry. The last hat factory in Denton closed in 1980.

Although the felt hat industry in Denton and Haughton was prosperous and an integral part of the town, working conditions in the factories were not risk free. One of the problems workers faced was mercury poisoning; mercury was used to separate the fur from the rabbit hide and workers were in regular contact with fur impregnated with mercury or exposed to mercury vapour. Inadequate ventilation in some parts of the hat making process led to other sorts of dangers; solvents were also used and on 14 January 1901 there was an explosion at the factory of Joseph Wilson & Sons in Denton, killing 13 people and injuring many more. The explosion was of vapour from methylated spirits used in the dying process.

Throughout the 19th century and well into the 20th century, a wide range of hats was manufactured to suit all tastes and purses. The names used by the competing manufacturers to describe their products was bewildering and some of these were; felt hats, silk hats, fur hats, wear fur hats, soft hats, stiff hats, velour hats, wool hats, straw hats and, of course, the ubiquitous cloth cap. In the 1930s the 'Attaboy' trilby hat was introduced by the Denton Hat Company. This brand quickly became famous and it was in production for many years. Ladies' hats were not forgotten either and at least one works specialised in making these and the hat master's wife designed them at home. Hats were made for home consumption and for export. The well-known slogan "If you want to get ahead, get a hat" arose in Denton because the mercury used in the felting process led to mercury poisoning.

In 2003, the prominent Wilson's Hat Factory on Wilton Street, together with the adjacent mill-workers' houses, other factories, Wilton Street Chapel and Mainstream Studios was demolished to make way for a new retail shopping park 'Crown Point North', part of a major town centre regeneration scheme. The shopping park has attracted the country's first Tesco Homeplus store, together with other major names, such as Bhs, Burton, River Island, TK Maxx, H&M, Boots, Jessops, Clarks, Mothercare and a Zavvi. In March 2007, the final unit opened as a Marks and Spencer Outlet store. 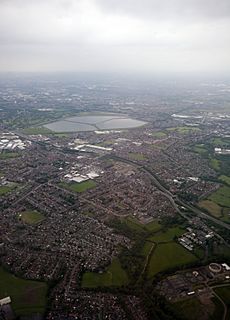 Viewed from the air, looking west

Denton is situated on the Lancashire coalfield and once had a number of collieries in operation. These included the Ellis Colliery (Which became Denton Colliery), Top Pit, Hard Mine Pit and, further south and near to the river Tame, Hulmes Pit. Much of the coal that they produced was consumed by local industry, there being an abundance of steam powered mills in the area.

Denton Colliery was the largest of these mines and eventually absorbed the other local pits, often using their shafts for ventilation or, in the case of Hulmes Pit, as a pumping station to drain water from the main workings. Denton Colliery was connected to the London & North Western Railway's line from Guide Bridge to Stockport by a standard gauge tramway. The tramway was worked by steam power, rather than horses, as evidenced by a photograph held in the Tameside Local History Library archives.

In 1926, miners at Denton Colliery joined the national strike against reduced wages and longer working hours. This dispute led to the general strike ( 3–12 May 1926). When the general strike was called off, coal miners stayed out for several more months.

As the strike started to crumble, miners at Denton Colliery remained steadfast, not returning to work until 5 November 1926, some 6 weeks and one day after their colleagues at the nearby Ashton Moss Colliery, the only other significant colliery left in Tameside at that time. They returned to face longer working hours and their pre-strike rates of pay.

Unfortunately, months without maintenance during the strike had taken their toll on many coal mines. Denton Colliery had flooded to the extent that it was no longer workable and the Denton Colliery Co. went into voluntary liquidation in 1929. The headstock was demolished in 1932 and the shaft was finally filled and capped in 1974.

Some traces of Denton Colliery can still be found. The colliery offices, situated on Stockport Road, still stand and are now the showroom of a company of monumental stonemasons. Behind the office building is a small section of wall from the colliery. On the opposite side of the road and slightly nearer to Crown Point is the building that once housed the local mines rescue station, now two private houses. Two miners cottages, much altered and now converted into one house, stand near the junction of Stockport Road and Cemetery Road. The foundations of Hulmes Pit were excavated during the early 1970s and can still be seen. Parts of the track bed of the tramway to Denton Colliery can still be traced, both on modern maps and on the ground, as can traces of a canal, known as the Beat Bank Branch, intended to link local collieries to the Stockport branch of the Ashton Canal at Reddish, which was partially built and then abandoned.

After hatting, the most important industry in Denton was the manufacture of lead-acid batteries by Oldham Batteries (Oldham & Son Ltd). In 1865, Joseph Oldham established a millwright general engineering shop and by 1887 this company was manufacturing machinery for the hat-making industry. Another important industry in the area was coal mining and shortly after 1887 the company began making machinery and equipment for this industry, which included miners' portable lamps. Up to this time, miners had always used the safety lamp devised in 1815 by Sir Humphry Davy (1778–1829) but this new battery-powered Davy lamp eventually replaced the traditional safety lamp.

Nonetheless, the company never converted exclusively to the manufacture of batteries and they still continued to make machinery for the hatting industry, general engineering equipment, portable lamps and lighting systems as well as helmet-lamps and other related equipment for the mining industry. It also produced attachments for the mechanical handling industry.

Oldham Batteries became a major Denton employer with over 1,000 employees, but by the beginning of 2002 the decision to close the factory had been made. The factory, which used to be off Lime Grove, Denton, is no longer there. It has been demolished, and a planning application for a further town centre retail park has been approved by Tameside Council. 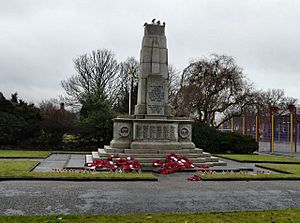 There is one main war memorial, or cenotaph, in Denton, located in Victoria Park. This memorial commemorates people from Denton and Haughton who served in two world wars. The names on the war memorial were collected from their relatives who wrote to the council with details of their loved ones who served in either war. The war memorial was unveiled on 23 July 1921. Figures from the Denton section of the Tameside council website, state that 3,500 Denton men served in the Great War (1914–1918), of that number, 369 people were killed.

The oldest church in Denton is St. Lawrence's. It is almost 500 years old, originally built in 1531. It is a listed Grade II* building. The church is also known locally as "Th'owd Peg" (the old peg) due to the fact, as a timber-framed building, it was constructed with wooden pegs rather than nails. It is more commonly known as the black and white church, because of its appearance. A local myth is also said to have a pirate buried within its grounds because of a grave stone marked with a skull and crossbones at its front door. In a more thorough investigation and article printed by Denton Local History Society (1995), it was found that the gravestone was actually a masonic gravestone belonging to a deceased Soldier named Samuel Bromley from the Royal Artillery.

The magnificent Victorian St Anne's Church, Haughton, is a Grade I listed building, and is built in the Gothic Revival style. 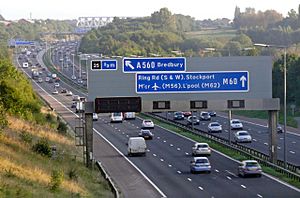 One of Denton's claims to fame is that, along with Reddish South, it has the UK's least frequent train service, every Friday, in one direction, from Stockport to Stalybridge.

There are bus links to Manchester city centre, Hyde, Ashton-under-Lyne and Stockport operated by Stagecoach.

All content from Kiddle encyclopedia articles (including the article images and facts) can be freely used under Attribution-ShareAlike license, unless stated otherwise. Cite this article:
Denton, Greater Manchester Facts for Kids. Kiddle Encyclopedia.