Kids Encyclopedia Facts
Not to be confused with Little Bollington (formerly Bollington) near Bowdon.

Bollington is a small town and civil parish in Cheshire, England, to the east of Prestbury. In the Middle Ages it was part of the Earl of Chester's manor of Macclesfield, and the ancient parish of Prestbury. In 2001, Bollington had a population of 7,095. (8,310 in 2011 census)

Bollington, locally nicknamed "Happy Valley", is on the River Dean and the Macclesfield Canal, on the south-western edge of the Peak District. Rising above the town is Kerridge Hill that is surmounted by White Nancy, a monument built to commemorate the Battle of Waterloo in the Napoleonic Wars.

Bollington is twinned with Thurles in County Tipperary, Ireland. 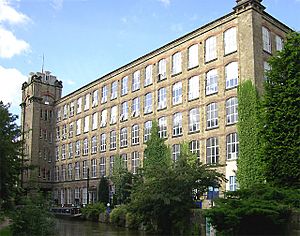 Clarence Mill, and the Macclesfield Canal

In the 19th and 20th centuries, Bollington was a major centre for cotton spinning. The Waterhouse Mill, now demolished, off Wellington Road, once spun the finest cotton in the world, and was sought after by lace makers in Nottingham and Brussels.

Clarence Mill still stands and has since been converted into luxury apartments. One of the oldest surviving mills in Bollington is the very small Defiance Mill, built in Queen Street about 1800 and also now restored for residential occupation.

There is a large paper coating mill on the site of Lower Mills. The original mill was built by George Antrobus in 1792 but very little of those buildings remain. A stone-built traditional mill still survives amongst the more recent brick developments. In the 1830s and 1840s this mill was rented to Thomas Oliver and Martin Swindells for the production of fine cotton thread for the lace-making industry. 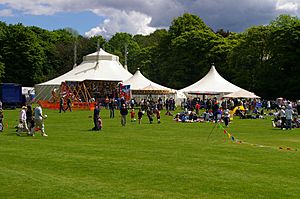 Every five or six years since 1964, the town has played host to the Bollington Festival which runs for two and a half weeks and involves various community activities, from concerts, theatrical, opera, art exhibitions, to local history events, science events and competitions.

In 2005 Canalside Community Radio was launched to provide community news and entertainment for the duration of the festival. Cousins John and Terry Waite opened the Festival. In December 2008 Canalside Radio – The Thread – began broadcasting to northeast Cheshire on 102.8 FM having obtained a full-time licence after five years of trying.

Hiking, cycling and riding through the hills around Bollington and along the Macclesfield Canal towpath are popular activities. Boats can be hired for day-trips and holidays at Grimshaw Lane canal wharf.

The town has many traditional public houses, most of which have not been modernised.

Bollington has a branch of the Women's Institute, which meets regularly while retired professional gentlemen may meet at the weekly Probus.

The Guide and Scout movements are all represented. Bollington United Junior Football Club (JFC) has three clubs for children ranging from under-10s to under-17s. Bollington is home to 236 Squadron of the Royal Air Force's Air Training Corps, which has its headquarters on Shrigley Road. The Squadron had close links with 42(R) (formerly 236 OCU) of the Royal Air Force before the latter was disbanded in the government defence review in 2010. The Sea Cadet Corps is for 10‑ to 18‑year‑olds. The Bollington and Macclesfield Sea Cadets also have a unit website.

There are numerous artistic, musical and theatrical groups all providing popular exhibitions and performances. Many of these are held at the Bollington Arts Centre.

Bollington is 2 miles (3.2 km) from the A523 road that runs from Hazel Grove, through Macclesfield to Leek in Staffordshire. The nearest motorway junctions are Junctions 17 and 19 (Congleton and Knutsford) on the M6, and junction 1 and 27 (Cheadle and Wilmslow) on the M60.

Bollington no longer has its own railway station, the nearest one being in Prestbury or Macclesfield for InterCity trains to London and Manchester. Regular bus services connect Bollington with Macclesfield, Hazel Grove and Stockport. 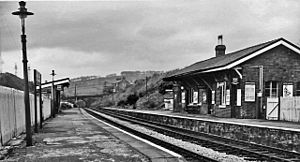 Bollington used to be served by the Macclesfield, Bollington & Marple Railway, a former railway between Marple Rose Hill and Macclesfield. The railway was built in 1869 by the Manchester, Sheffield & Lincolnshire Railway (MS&LR) and the North Staffordshire Railway (NSR), as a part of a quest to provide an alternative link between Manchester and the south, that was independent of the London & North Western Railway (L&NWR). Cotton mill owner Thomas Oliver had suggested this route hoping to revive the cotton mills of Bollington, the Kerridge stone quarries as well as the coal fields at Poynton. The line was closed in 1970 as part of the Beeching closures. The trackbed is today used for walking, cycling and horseriding; it is known as the Middlewood Way.

The Macclesfield Canal passes through the centre of the town and is a picturesque and rural part of the Cheshire Ring. The stretch from Marple Junction on the Peak Forest Canal to Bosley is without locks and is carried on an embankment through Bollington. Kerridge was the scene of a spectacular breach on 29 February 1912, where the water from Bosley to Bugsworth basin emptied through the town. Today the canal is used for leisure purposes.

All content from Kiddle encyclopedia articles (including the article images and facts) can be freely used under Attribution-ShareAlike license, unless stated otherwise. Cite this article:
Bollington Facts for Kids. Kiddle Encyclopedia.