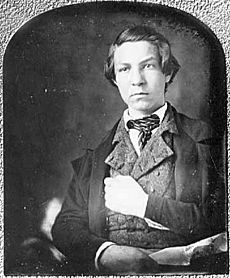 Andrews was born in Hillsborough, New Hampshire, the son of a rural farmer. He attended school during the winter months until 1843 when he traveled to Boston. He attended the Francestown Academy, completed his education, and studied law in Cambridge, Massachusetts, in 1848. He passed his bar examination two years later and established a law practice in Newton, Massachusetts, where he served as a member of the city school board in 1851–1852.

He briefly relocated to Boston in 1853, but left the following year for the West, settling in Kansas. He went to Washington, D.C., to help promote Kansas's interest to the United States Congress, and spent two years working as a law clerk in the United States Treasury Department. He then moved to St. Cloud, Minnesota, in 1856, and three years later, was elected to the Minnesota State Senate. During the presidential election of 1860, he actively supported the Northern Democrat Stephen A. Douglas and was nominated as a presidential elector. Despite his support for Douglas, in 1861, he was instrumental in establishing a newspaper, the Minnesota Union, supporting the policies of President Abraham Lincoln, and served as editor before enlisting in the Union Army.

During the Civil War, Andrews rose to the rank of brigadier general and at its close was brevetted as a major general. He originally enlisted as a private, but was commissioned captain in the 3rd Minnesota Infantry. Captured by Confederates in Tennessee in July 1862, he was held as a prisoner of war until October, when he was exchanged. He returned to his regiment as lieutenant colonel and participated in the Vicksburg Campaign.

In July 1863, Andrews was promoted to colonel and commanded a brigade in the operations to capture Little Rock, Arkansas, later in the year. Throughout the balance of the year and into early 1864, Andrews helped organize and foster the Unionists in Arkansas and was influential in the reorganization of Arkansas as a free state. He was promoted to brigadier general in acknowledgement of his efforts while commanding troops near Augusta, Arkansas. Andrews was assigned to the command of the Second Division of the XIII Corps, and participated in the siege and storming of Fort Blakely in Alabama. On March 9, 1865, he was brevetted Major General and assigned command of the district of Mobile.

Andrews was dispatched to Houston, Texas, to supervise the early stages of Reconstruction in the region and to keep the order while a new provisional civil government was put in place under Governor Andrew J. Hamilton. He mustered out of the service on January 15, 1866. He was a companion of the Minnesota Commandery of the Military Order of the Loyal Legion of the United States - a military society of officers who had served in the Union armed forces during the American Civil War.

Interested in scientific forestry, Andrews after the war worked to stir public sentiment for responsible logging and forest practices, but without much success until the Great Hinckley Fire of 1894 burned several towns in east-central Minnesota, garnering widespread public attention. He maintained that proper forestry would renew the state's ravaged timberlands and make them fire-resistant. Eventually, leading foresters and companies began to implement Andrews' ideas and practices. He was Minnesota state Forestry Commissioner when the Baudette Fire of 1910 burned, further strengthening his argument for regulation of forestry.

A prolific writer, his publications include a History of the Campaign of Mobile (1867) and Brazil, Its Conditions and Prospects (1887; third edition, 1895).

All content from Kiddle encyclopedia articles (including the article images and facts) can be freely used under Attribution-ShareAlike license, unless stated otherwise. Cite this article:
Christopher Columbus Andrews Facts for Kids. Kiddle Encyclopedia.