Christopher Gadsden (February 16, 1724 – August 28, 1805) was an American politician who was the principal leader of the South Carolina Patriot movement during the American Revolution. He was a delegate to the Continental Congress, a brigadier general in the Continental Army during the American Revolutionary War, Lieutenant Governor of South Carolina, a merchant, and the designer of the Gadsden flag.

Gadsden was born in 1724 in Charleston, South Carolina. He was the son of Thomas Gadsden, who had been in the Royal Navy before becoming customs collector for the port of Charleston. Christopher was sent to school near Bristol, England. He returned to America in 1740 and served as an apprentice at a counting house in Philadelphia, Pennsylvania. He inherited a large fortune from his parents who died in 1741. From 1745 to 1746 he was a purser on a British warship during King George's War. He entered into mercantile ventures, and by 1747 had earned enough to return to South Carolina and buy back the land his father had sold because he needed the money to pay off debts. He built Beneventum Plantation House in about 1750. There, although he showed ambivalence towards slavery, he kept slaves and traded them for use on his property as was common practice among plantation owners in South Carolina. 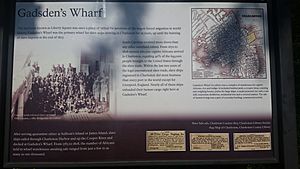 Gadsden began his rise to prominence as a merchant and patriot in Charleston. He prospered as a merchant, and built the wharf in Charleston that still bears his name where many slaves were brought to America. He was captain of a militia company during a 1759 expedition against the Cherokee. He was first elected to the Commons House of Assembly in 1757, and began a long friction with autocratic royal governors.

In 1766 the assembly made him one of their delegates to the Stamp Act Congress in New York City, which was called to protest the Stamp Act. While his fellow delegates Thomas Lynch and John Rutledge served on committees to draft appeals to the House of Lords and Commons respectively, Gadsden refused any such assignment, since in his view the British parliament had no rights in the matter. He addressed himself with outspoken support for the Declaration of Rights produced by the Congress. His addresses brought him to the attention of Samuel Adams of Massachusetts, and the two began a long correspondence and friendship. Gadsden was eventually known as "the Sam Adams of the South". 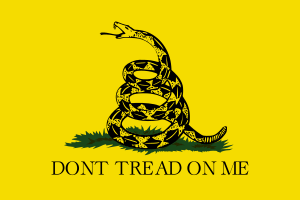 In February 1776, South Carolina President John Rutledge named him a brigadier general in charge of the state's military forces. As the British prepared to attack Charleston, Major General Charles Lee ordered outlying positions abandoned. Rutledge and the local officers disagreed. A compromise was reached and as William Moultrie prepared the defenses on Sullivan's Island, Gadsden paid for, and his regiment built, a bridge that would allow their escape if the position were threatened. The British attack was repulsed. In 1778, Gadsden was a member of the South Carolina convention that drafted a new state constitution. That same year he was named the Lieutenant Governor, to replace Henry Laurens who was away at the Continental Congress. He would serve in that office until 1780. Actually, for the first year and a half his office was called "Vice President of South Carolina," but when the new constitution was adopted, the title was changed to the modern usage.

When the British laid siege to Charleston in 1780, John Rutledge, as president of the council, fled to North Carolina to ensure a "government in exile" should the city fall. Gadsden remained, along with Governor Rawlins Lowndes. General Benjamin Lincoln surrendered the Continental Army garrison on May 12 to General Sir Henry Clinton. At the same time, Gadsden represented the civil government and surrendered the city. He was sent on parole to his Charleston house.

After General Sir Henry Clinton returned to New York, the new British commander in the South, General Cornwallis, changed the rules. On the morning of August 27, he arrested about 20 of the civil officers then on parole. They were marched as prisoners to a ship and taken to St. Augustine, Florida. When they arrived, Governor Tonyn offered the freedom of the town if they would give their parole. Most accepted, but Gadsden refused claiming that the British had already violated one parole, and he could not give his word to a false system. As a result, he spent the next 42 weeks in solitary confinement in a prison room at the old Spanish fortress of Castillo de San Marcos. When they were finally released in 1781, they were sent by merchant ship to Philadelphia. Once there, Gadsden learned of the defeat of Cornwallis' subordinate Banastre Tarleton at Cowpens and Cornwallis' subsequent movement to Yorktown. Gadsden hurried home to help the restoration of South Carolina's civil government. 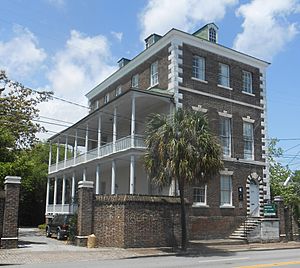 Gadsden was returned to South Carolina's House of Representatives, then meeting at Jacksonboro. At this session, Governor Randolph and de facto President Rutledge both surrendered their offices. Gadsden was elected as the governor but felt he had to decline. His health was still impaired from his imprisonment, and an active governor was needed since the British had not yet given up Charleston. So in 1782, John Mathews became the new governor. Gadsden was also a member of the state convention in 1788 and voted for ratification of the United States Constitution.

In 1798, he built the imposing house at 329 East Bay Street in the Ansonborough area of Charleston that remained in the family for more than a century; famous ironworker Philip Simmons built the gates that incorporate a snake motif, drawn from the "Don't Tread on Me" flag that Gadsden designed.

Gadsden was married three times and had four children with his second wife. The Gadsden Purchase of Arizona was named for his grandson James Gadsden. Another grandson, Christopher E. Gadsden, was the fourth Episcopal Bishop of South Carolina.

Gadsden died from an accidental fall on August 28, 1805, in Charleston, and is buried there in St. Philip's Churchyard.

All content from Kiddle encyclopedia articles (including the article images and facts) can be freely used under Attribution-ShareAlike license, unless stated otherwise. Cite this article:
Christopher Gadsden Facts for Kids. Kiddle Encyclopedia.