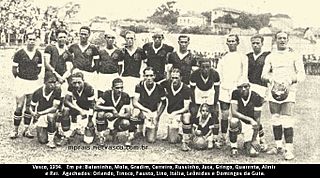 Team photo from the 1934 season

Club de Regatas Vasco da Gama was founded in August 21, 1898 (although the professional football department started on November 5, 1915), by Portuguese immigrants, and it is still traditionally supported by the Portuguese community of Rio de Janeiro. It is one of the most popular clubs in Brazil, with more than 20 million supporters.

Its statute defines the club as a "sportive, recreative, educational, assistant and philanthropic non-profit organization of public utility".

Their home stadium is São Januário, with a capacity of 21,880, the third biggest in Rio de Janeiro (after Maracanã and Engenhão), but some matches (especially the city derbies) are played at the Maracanã (capacity of about 80,000). They play in black shirts with a white diagonal sash that contains a Cross pattée (famously, though mistakenly, identified as a Maltese cross), black shorts and black socks.

The club is named after the Portuguese explorer Vasco da Gama.

All content from Kiddle encyclopedia articles (including the article images and facts) can be freely used under Attribution-ShareAlike license, unless stated otherwise. Cite this article:
Club de Regatas Vasco da Gama Facts for Kids. Kiddle Encyclopedia.