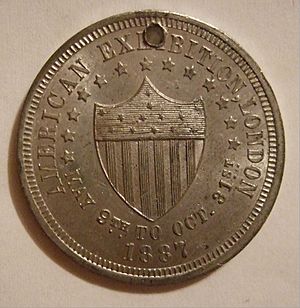 An aluminium token coin from the 1887 American Exhibition in London. At the time, aluminium was complex to produce and more valuable than silver

The coinage metals comprise, at a minimum, those metallic chemical elements which have. historically been used as components in alloys used to mint coins. The term is not perfectly defined, however, since a number of metals have been used to make "demonstration coins" which have never been used to make monetized coins for any nation-state, but could be. Some of these elements would make excellent coins in theory (for example, zirconium), but their status as coin metals is not clear. In general, because of problems caused when coin metals are intrinsically valuable as commodities, there has been a trend in the 21st century toward use of coinage metals of only the least exotic and in-expensive types.

Historically, most coinage metals (or alloys) are from the three nonradioactive members of group 11 of the periodic table: copper, silver and gold, the copper usually being augmented with tin and often other metals to form bronze. Gold, silver and bronze or copper were the coinage metals of the ancient world, and most medieval coins.

All western histories of coins begin invention at some time slightly before or after 700 BC. Since that time, coins have been the most universal embodiment of money. These first coins were made of electrum, a naturally occurring pale yellow mixture of gold and silver that was further alloyed with silver and copper.

However, there are many more, even for coins made from intrinsically precious metals. Precious metals are always used in bullion coins and some collectable coins. Coins not intended for circulation or for intrinsic value have also been made experimentally using an even larger variety of metals.

Requirements for a coinage metal

Coins that are intended for circulation have some special requirements based on the conditions they will encounter. For example, a coin may be in circulation for up to 30 years, and so must have excellent wear resistance and anti-corrosion properties. Achieving this goal necessitates the use of base metal alloys. Some metals like manganese have occasionally been used in coins, but suffer from making the coins too hard to take an impression well (or metals apt to wear out stamping machines at the mint).

When minting coins, especially low denomination coins, there is a risk that the value of metal within a coin is greater than the face value. This leads to the possibility of smelters taking coins and melting them down for the scrap value of the metal. Pre-1992 British pennies were made of 97% copper; but as of 2008, based on the price of copper, the value of a penny from this period is 1.5 new-pence. Modern British pennies are now made of copper-plated steel. For similar reasons, American pennies (cents) were once made of copper alloys, but since 1982 have been made of copper-plated zinc.

This problem has led to nearly the end of use for a common base metal alloy for everyday coinage in the 20th century, called cupronickel, with varying proportions of copper and nickel, most commonly 75% Cu 25% Ni. Cupronickel has a silver color, is hard wearing and has excellent striking properties, essential for the design of the coin to be pressed accurately and quickly during manufacture. In the 21st century with the prices of both copper and nickel rising, it has become more common to experiment with various alloys of steel, often stainless steel. For example, in India some coins have been made from a stainless steel that contains 82% iron, 18% chromium, and many other countries that have minted coins that contain metals now worth nearly the coin face-value, are experimenting with various steel alloys.

All content from Kiddle encyclopedia articles (including the article images and facts) can be freely used under Attribution-ShareAlike license, unless stated otherwise. Cite this article:
Coinage metal Facts for Kids. Kiddle Encyclopedia.