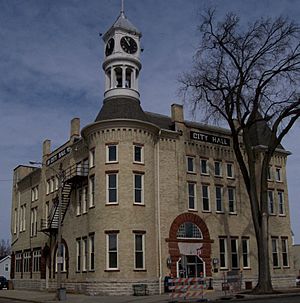 H. A. Whitney, a Yankee peddler from Vermont, moved to Columbus in 1845 and constructed the first wood frame store building in the community on the land where the Whitney now stands. The building served as a combination store/tavern/rooming house and post office, with Whitney as the first postmaster. In 1857, the building burned down and was replaced by the current Whitney Hotel in 1858. This cream brick, Italianate-style hotel's third floor ballroom was heated by six wood-burning stoves. The local newspaper reported on a ball there in 1863, "if you ever hear of a ball by Fuller, ask no questions, but go at once, and enjoy yourselves, and for one night forget the 'fear of the draft'".

During the 1880s, The Whitney hosted traveling health practitioners whose expertise ranged from "delivering a 40-foot long tape worm" to a local couple to curing piles. Near the turn of the 20th century, the ballroom was turned into an apartment, and from then on served as commercial, professional, and apartment space.

In the 1950s, a restaurant and bar occupied the first floor of the building. From the 1960s to the present, a succession of owners occupied the building and maintenance was deferred. In the 1950s, the building fell into disrepair and as a result of its continued decline, faced demolition in 1990. In February 1991, Heartland Properties, Inc. helped local citizens create the Columbus Downtown Development Corporation (CDDC), which served as the developer to restore the Whitney.

There were 2,123 households, of which 31.3% had children under the age of 18 living with them, 48.5% were married couples living together, 9.8% had a female householder with no husband present, 4.6% had a male householder with no wife present, and 37.1% were non-families. 30.8% of all households were made up of individuals, and 11.2% had someone living alone who was 65 years of age or older. The average household size was 2.33 and the average family size was 2.91.

Columbus is served by Amtrak's Empire Builder between Chicago and Seattle, with a train stopping at the station in each direction every day.

Columbus is also served by Lamers Bus Service which provides a Connect to Madison, Wisconsin from Amtrak. 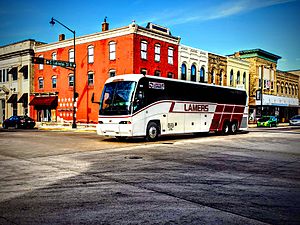 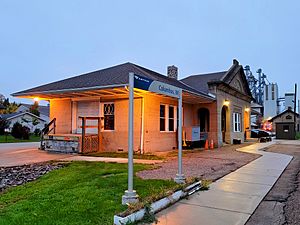 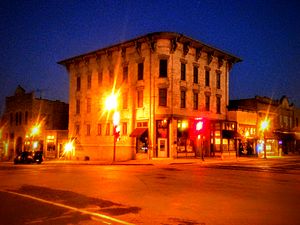 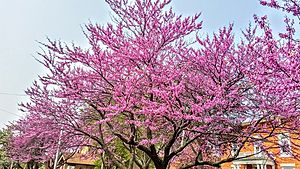 The Redbud Festival occurs in May around Mother's Day. Each year the community crowns a prince and princess during the budding of the "Columbus Wisconsin Strain" of the redbud tree (cercis canadensis). The festival includes brats, music, and trees in full bloom.

Columbus is served by the Columbus School District, which operates an elementary school, a middle school, and a high school:

Other schools in Columbus:

All content from Kiddle encyclopedia articles (including the article images and facts) can be freely used under Attribution-ShareAlike license, unless stated otherwise. Cite this article:
Columbus, Wisconsin Facts for Kids. Kiddle Encyclopedia.