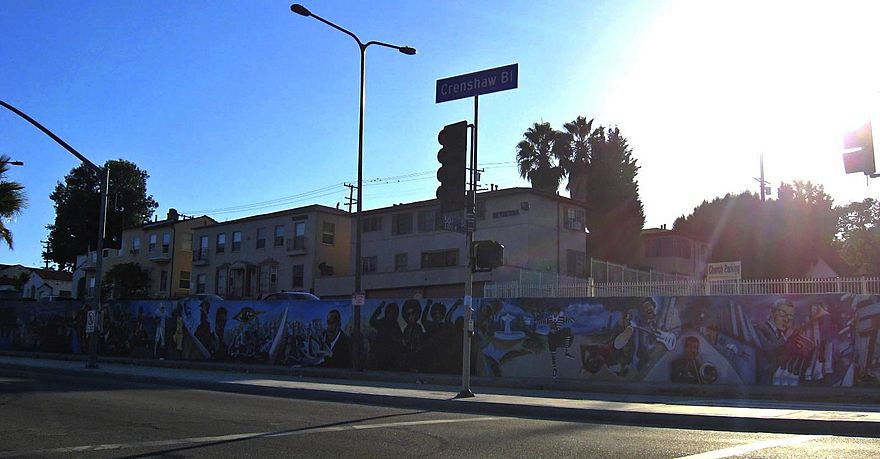 Mural of African-American Progress and apartment complexes, along Crenshaw Boulevard

Crenshaw, or the Crenshaw District, is a neighborhood in South Los Angeles, California.

In the post–World War II era, a Japanese American community was established in Crenshaw. African Americans started migrating to the district in the mid 1960s, and by the early 1970s were the majority.

The Crenshaw Boulevard commercial corridor has had many different cultural backgrounds throughout the years, but it is still "the heart of African American commerce in Los Angeles".

According to the Mapping L.A. project of the Los Angeles Times, Crenshaw is bordered by Chesterfield Square on the east, Hyde Park on the south, View Park-Windsor Hills on the west. It includes Leimert Park.

After courts ruled segregation covenants to be unconstitutional, the area opened up to other races. A large Japanese American settlement ensued, which can still be found along Coliseum Street, east and west of Crenshaw Boulevard. African Americans started migrating to the district in the mid 1960s, and by the early 1970s later were the majority.

In the 1970s, Crenshaw, Leimert Park and neighboring areas together had formed one of the largest African-American communities in the western United States. Crenshaw had suffered significant damage from both the 1992 Los Angeles riots and the 1994 Northridge earthquake but was able to rebound in the mid 2000s with the help of redevelopment. Crenshaw has significant affluent middle-class areas, and some areas with some poverty rates.

In 2006, the population of Crenshaw was around 27,600. Currently, there is a huge demographic shift increased in where many middle and lower-class blacks and Latinos are migrating to cities in the Inland Empire as well as cities in the Antelope Valley sections of Southern California as a form of gentrification. Despite the current major demographic shift, blacks had maintained their status as one of the neighborhood's largest ethnic group, with African-Americans forming 63.34% of the population, followed by Whites and Latinos (any race) at 30%, white (not Latino), 16.89%; Asian, 4.38%; American Indians, 0.43%; Native Hawaiian and other Pacific Islanders, 0.20%; other races, 9.20%; two or more races, 9.32%.

The K Line, known as the Crenshaw/LAX Line during planning and construction, is an 8.5-mile (13.7 km) light rail line that will "add eight new stations serving the Crenshaw neighborhood, Leimert Park, Inglewood, Westchester and surrounding areas".

The line will run between the Expo/Crenshaw station and Aviation/96 Street station, transiting generally north-south along Crenshaw Boulevard.

At its peak, it was one of the largest Japanese-American settlements in California, with about 8,000 residents around 1970, and Dai-Ichi Gakuen had a peak of 700 students.

Beginning in the 1970s the Japanese American community began decreasing in size and Japanese-American businesses began leaving. Scott Shibya Brown stated that "some say" the effect was a "belated response" to the 1965 Watts riots and that "several residents say a wave of anti-Japanese-American sentiment began cropping up in the area, prompting further departures." Eighty-two-year-old Jimmy Jike was quoted in the Los Angeles Times in 1993, stating that it was mainly because the residents' children, after attending universities, moved away.

By 1980, there were 4,000 Japanese ethnic residents, half of the previous size. By 1990 there were 2,500 Japanese-Americans, mostly older residents. By 1993, the community was diminishing in size, with older Japanese Americans staying but with younger ones moving away. That year, Dai-Ichi Gakuen had 15 students. Recently there has been a shift in a new generation of Japanese Americans moving back into the neighborhood.

The district's charter schools in the area include the KIPP network. KIPP Academy of Opportunity

All content from Kiddle encyclopedia articles (including the article images and facts) can be freely used under Attribution-ShareAlike license, unless stated otherwise. Cite this article:
Crenshaw, Los Angeles Facts for Kids. Kiddle Encyclopedia.