Culture of Cincinnati facts for kids

This is relating to the culture of Cincinnati, Ohio. 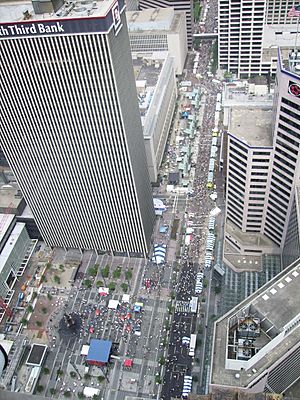 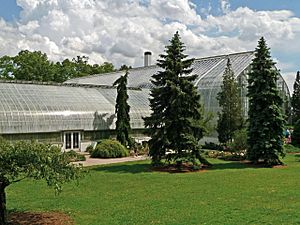 The Krohn Conservatory was completed in 1933, and named in honor of Irwin M. Krohn who served on the Board of Park Commissioners. It now contains more than 3,500 plant species from all over the world. 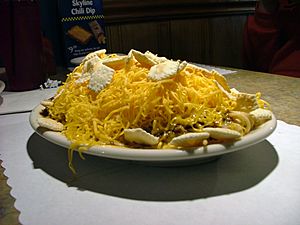 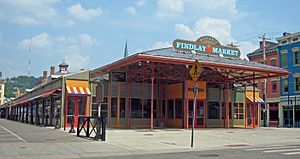 Findlay Market is Ohio’s oldest continuously-operated public market and one of Cincinnati’s most notable institutions. The market is the last remaining market among the many that once served Cincinnati.

"Cincinnati chili" is "one of this nation's most distinctive regional plates of food," according to national food writers Jane and Michael Stern. It is a Mediterranean-spiced meat sauce served over spaghetti or hot dogs at several chains such as Skyline Chili, Gold Star Chili, Empress Chili, and Dixie Chili plus independents such as Camp Washington Chili. The chili is best appreciated not in a bowl, as one would with the chunkier, "Tex-Mex" chili, but rather, as a sauce to cover a plate of spaghetti, covered in shredded cheddar cheese (3-way), the latter with onions or beans (4-way) or with both (as a 5-way), all topped off with oyster crackers and to some, hot sauce. It can also be placed on top of a hot dog in a steamed bun with mustard and onions, and topped with cheddar cheese (referred to as a cheese coney).

Findlay Market is the oldest continuously-operated public market in the state of Ohio.

Goetta is a meat-and-grain sausage or mush of German inspiration that is popular in the greater Cincinnati area. It is primarily composed of ground meat (pork, or pork and beef), pin-head oatmeal and spices formed into a loaf and then sliced and fried, often in butter, "to a melt-in-the-mouth tenderness."

Graeter's is a regional chain of ice cream parlors that also sells baked goods and candies. It was founded by Louis "Charlie" and Regina Graeter, husband-and-wife immigrants from Bavaraia, in 1870, and grew into a chain under Regina's leadership following her husband's death. The Graeter family still runs the chain, which has spread beyond the Cincinnati area with chain-owned and franchised locations in several regional metropolitan areas, plus one store on the Las Vegas Strip. Pints of the ice cream are also sold in grocery stores in all U.S. states except Hawaii and the Dakotas.

Oprah Winfrey is a fan of Graeter's and caused sales to skyrocket when she raved about the ice cream on her show.

Montgomery Inn is a local barbecue restaurant that is internationally known for its signature sauce. Bob Hope would frequently have the restaurant's ribs flown to his home in California.

Dewey's is a Cincinnati area based pizza company that specializes in a variety of gourmet and delicious pizzas, salads, and calzones. Their fluffy crusted and original pizzas are a Cincinnati favorite, and there are many locations throughout Greater Cincinnati.

Arnold's Bar and Grill is the oldest continuously-operated bar in the city and one of the oldest in the country. It was founded in 1861 and has had only four owners, most of whom have lived upstairs.

The city is known for the quantity and quality of its many gourmet restaurants. Wine Spectator recognized 15 area restaurants for the excellence of their wine lists, including two at the "Best Award of Excellence" level, Jeff Ruby's Carlo & Johnny and Jeff Ruby's Steakhouse.

Until 2005, when the restaurant closed, the Maisonette carried the distinction of being Mobil Travel Guide's longest running five-star restaurant in the country. The former Maisonette's chef de cuisine, Jean-Robert de Cavel, has opened several restaurants in the area since leaving The Maisonette. Jean-Robert's Table opened in 2010, French Crust in 2012, and Le Bar a Boeuf in 2014.

Cincinnati's German heritage is also evidenced by the many eateries that specialize in schnitzels and hearty Bavarian cooking. 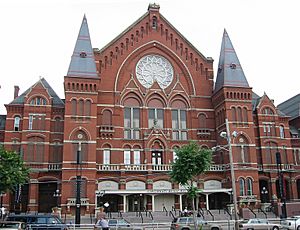 As the fifth-oldest orchestra in the United States, the Cincinnati Symphony Orchestra (CSO) has a legacy of fine music making as reflected in its performances in historic Music Hall, recordings, and international tours. 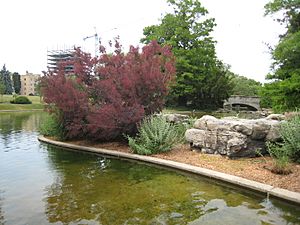 Eden Park is home to the Cincinnati Art Museum. 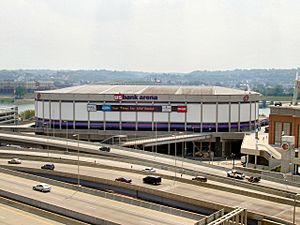 US Bank Arena is home to not only big music acts but also local hockey, indoor football, and basketball.

For a city of its size, Cincinnati boasts a vibrant community of theater artists, educators, and producers. Audiences can attend professional, semi-professional, community, and educational theater opportunities year-round in the Cincinnati tri-state area. Many theatres within the region are members of the League of Cincinnati Theatres. In addition to theater experiences offered through most high schools, many of which are critiqued by local students through the Cappie Awards program, Cincinnati offers a number of college-level theater/performing arts training and performing opportunities.

All content from Kiddle encyclopedia articles (including the article images and facts) can be freely used under Attribution-ShareAlike license, unless stated otherwise. Cite this article:
Culture of Cincinnati Facts for Kids. Kiddle Encyclopedia.