Darnestown is a United States census-designated place (CDP) and an unincorporated area in Montgomery County, Maryland. The CDP is 17.70 square miles (45.8 km2) with the Potomac River as its southern border and the Muddy Branch as much of its eastern border. Seneca Creek borders portions of its north and west sides. The Travilah, North Potomac, and Germantown census-designated places are adjacent to it, as is the city of Gaithersburg. Land area for the CDP is 16.39 square miles (42.4 km2). The Darnestown CDP has a population of 6,723, while the village of Darnestown is considerably smaller in size and population. Washington, D.C. is about 25 miles (40 km) away.

Within the Darnestown census-designated place at the intersection of what is now Darnestown Road and Seneca Road, the small village of Darnestown has existed since about 1800. The community had a population of 200 in 1878. The name Darnestown comes from William Darne, who owned the most land in the area at the beginning of the 19th century when the community post office opened. Settlement in the area began around 1750, and the tiny community was called Mount Pleasant, and then Darnes, before the name Darnestown began being used. The community thrived in the 19th century during the golden years of the Chesapeake and Ohio Canal, as the improved transportation facilities offered area farmers access to more markets. In the 1880 census, the United States Census Bureau began using a Minor Civil Division (MCD) category for aggregating populations, and the new Darnestown district had about 1,500 people. Growth stopped late in the 19th century when a new railway bypassed the community.

In the 1960s, affluent families began buying Montgomery County farmland for new housing and equestrian purposes. Today, many Darnestown CDP residents are wealthy and live in large homes on large lots, which is reflected in their high average income and low housing density. The median household income is nearly $228,000, and 73 percent of residents aged 25 years or more have at least a bachelor's degree or higher. The community benefits from its proximity to workplaces such as the Shady Grove Hospital area and the I-270 Technology Corridor. Washington is accessible by automobile or public transportation. Beginning with the 2000 census, the Census Bureau created a Darnestown census-designated place.

Named for William Darnes, the community was built on 2,000 acres (810 ha) of land inherited by his wife from her father Charles Gassway's 'Mount Pleasant' land grant. Originally, the town was referred to as Mount Pleasant, but the name shifted in popular parlance to Darnes and eventually Darnestown. The community was located halfway between Montgomery Court House (modern-day Rockville) and the mouth of the Monocacy River, and originally consisted of a tavern, a pair of blacksmiths, a wheelwright, a single store, and a log building which served as both a school and the home of several churches. The community's greatest economic boom was during the Civil War, when providing for the needs of the armies camped around Washington, DC provided new income. Following the war, however, Darnestown slowly deflated and eventually ceased being a commercial center, with only a few of the original buildings left standing. The area has since been absorbed by suburban development.

Darnestown has a number of local parks, including Darnestown Square Park, Muddy Branch Stream Park, Lighthouse Point Park, and the Seneca Ridge Trail and Seneca Creek Park. Darnestown is also home to three locks on the C&O Canal. The town also borders the Montgomery County Agricultural Reserve, which is made up of lots of farmland and parks that many residents of Darnestown can appreciate. There is also a community softball league for adults in the community, with teams representing the different areas of Darnestown. It is also to tube down the Great Seneca Creek from a starting point off of Berryville Road to the Seneca Aqueduct located near Pooles's Store.

As of 2018 estimates by the U.S. Census Bureau, Darnestown has a median household income of $227,962 and a poverty rate of 0.3 percent. In Bloomberg's 2020 Index of the 200 richest communities within the United States, Darnestown was ranked 50th. An estimated 2,209 households have an average of 2.9 persons living in them. The percentage of residents under the age of 18 was 22.4, while 13.1 percent were 65 years of age or older. The gender makeup was 52.0 percent male and 48.0 percent female.

The racial makeup of the community was 74.6 percent White alone, 6.0 percent African American alone, 16.1 percent Asian alone, and 3.1 percent from two or more races. Hispanic or Latino of any race was 6.9 percent of the population. The educational attainment for the community is above the average for the United States, with 96.2 percent of Darnestown residents aged 25 years or more being a high school graduate or higher, while the same figure for the United States is 87.7 percent. A bachelor's degree or higher was attained by 72.6 percent of residents aged 25 or more. 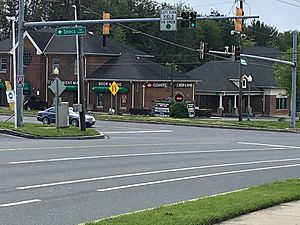 The data based on the Census Bureau 2012 Survey of Business Owners lists 881 firms in Darnestown. The number of firms with paid employees is 162, and those firms employ 1,068 people. The data are divided using the North American Industry Classification System (NAICS), and the Professional, Scientific, and Technical Services category (NAICS 54) is the leader in firms (78) and annual payroll ($16.3 million), while Retail Trade (NAICS 44–45) is the leader in number of paid employees (245) and sales ($74.7 million). Educational Services (NAICS 61) is another important category.

Darnestown is close to major employers such as Shady Grove Hospital and the technology companies along Interstate 270. Over 25 biotech companies and over 25 technology companies have facilities in the I-270 Technology Corridor in the Rockville, Gaithersburg, or Germantown area. Darnestown residents who commute further distances to work typically use Interstate 270 or River Road to the Capital Beltway. The Washington Metro system, especially the Red Line, is also available.

Darnestown residents have a small set of shops located at the intersection of Darnestown Road and Seneca Road, including a grocery store, gas station, bank, and other stores. That intersection may also be the site of a lost cemetery that contained some members of the Darne family. Two more shopping centers are located further east on Darnestown Road: Quince Orchard Market Place and The Shops at Potomac Valley. Additional shopping is available at Germantown, North Potomac, and Gaithersburg. Closer to the Potomac River, the Potomac Village Shopping Center and Potomac Promenade are available in Potomac. Based on 2012 census data, total retail sales for the Darnestown CDP were $64.1 million. 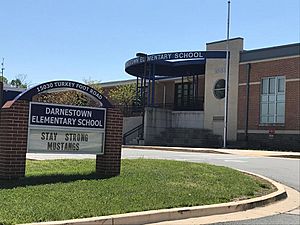 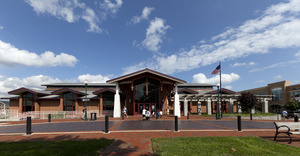 Montgomery College has a Germantown campus known as the Pinkney Innovation Complex for Science and Technology. It also has a campus in Rockville and a training center in Gaithersburg. The Universities at Shady Grove is located within North Potomac and offers select degree programs from nine public Maryland universities. Instead of being a university itself, this campus partners with other universities and offers courses for 80 upper-level undergraduate, graduate degree, and certificate programs. The participating universities handle admissions. Johns Hopkins University has a campus in Rockville near the Universities at Shady Grove.

Several libraries are located not far from Darnestown, including three that are part of the Montgomery County Public Library system. Quince Orchard library is closest to the Darnestown village, located across the street from Quince Orchard High School in North Potomac. Germantown Library opened in 2007, and is located north of Northwest High School in Germantown. Rockville Memorial Library, a larger library also part of the county system, is located in Rockville three blocks from the Rockville Metro station. While the Rockville Memorial Library celebrated its 50th anniversary in 2001, Quince Orchard Library was only a year old at that time. A fourth county library is close to those who live near River Road. Potomac library opened in 1985, and has been upgraded since that time. Priddy Library is part of the University of Maryland Libraries system and is located at the Universities at Shady Grove in North Potomac. The Priddy Library opened in 2007. 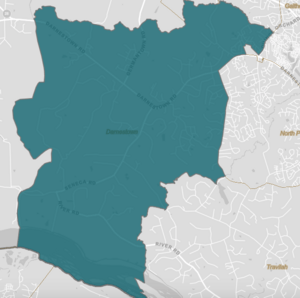 Darnestown census-designated place is 16.39 square miles (42.4 km2) of land in Maryland on north side of the Potomac River

Portions of the Washington Metropolitan Area Transit Authority's Metrorail system are located in Montgomery County, and Red Line stations on the west side of the county are closest to Darnestown. Among those west side Metro stations are Shady Grove (Gaithersburg), Rockville, and Twinbrook (south Rockville). Those approaching from River Road often use the Grosvenor-Strathmore station. A Montgomery County Ride-On bus runs through the Darnestown village and connects riders with Shady Grove Metro station via a route that includes stops at Seneca-Darnestown and Quince Orchard-Darnestown on Darnestown Road.

Darnestown's electric power is provided by Pepco (Potomac Electric Power Company), which serves much of Montgomery County, portions of Prince George's County, and all of the District of Columbia. Washington Gas provides natural gas service to residents and businesses. Curbside garbage, recycling, and yard waste collection and disposal are not provided by the county, and independent contractors must be used. The Shady Grove Processing Facility and Transfer Station, a county waste collection facility located in Rockville, is available for drop off of garbage, recycling, and yard debris. The Washington Suburban Sanitary Commission (WSSC) provides water and wastewater treatment for Darnestown. Drinking water comes from the WSSC treatment facility on the Potomac River, while sewage is treated at a plant in the District of Columbia.

The nearest general hospital is the Adventist HealthCare Shady Grove Medical Center in Rockville. This medical facility has a five-star rating from the Centers for Medicare & Medicaid Services. Adventist Health Care has multiple satellite locations, including its Adventist HealthCare Germantown Emergency Center on Germantown Road. MedStar Health Urgent Care in Gaithersburg is located in The Shops at Potomac Valley on Darnestown Road near Quince Orchard High School.

All content from Kiddle encyclopedia articles (including the article images and facts) can be freely used under Attribution-ShareAlike license, unless stated otherwise. Cite this article:
Darnestown, Maryland Facts for Kids. Kiddle Encyclopedia.