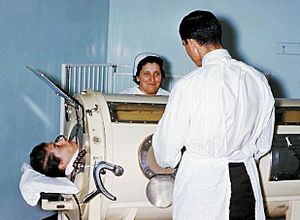 Examining a patient in a tank respirator

A disease or medical condition is an unhealthy state where something bad happens to the body or mind. Diseases can cause pain, parts of the body to stop working the right way, or death. The word disease is sometimes used to include:

A disease can be caused by many things. Sometimes germs enter our body through food, water or air. A person can be infected by infectious agents like bacteria, viruses or fungus. Disease can also be caused by eating bad or old foods. There are small germs in old foods that can cause diseases. Sometimes the germs produce chemicals or toxins which causes the disease.

One of the most common causes of disease is poor sanitation and lack of clean water. Some deadly diseases like malaria in tropical parts of the world are spread by a mosquito. Animals that spread disease are called vectors. There are many vectors, including snails, ticks, and fleas.

Some people are born with 'genetic diseases'. These are diseases because of an error or mutation in a person's DNA. An example of a mutation is cancer. Living or working in an unhealthy environment can also be a cause for diseases. Diseases are more common in older people.

Some diseases can be helped with medicine. Infections can often be cured by antibiotics, though resistance to antibiotics is a problem. Some disease may be helped by surgery. Not every disease can be helped with medicine or surgery, though. Some diseases must be treated during the whole life; they are chronic (long-lasting) diseases. An example of a chronic disease is diabetes mellitus. Diabetes can be treated (made better) but it can not yet be cured (made to totally go away). People who usually treat diseases are called doctors or physicians.

Some diseases that are common or very bad are tested for even in people who do not show any symptoms. If these diseases are found early they can be treated before they cause problems. An example would be checking a woman for cervical cancer with a test called a pap smear.

If cervical cancer is found early it can be cured. If it is found later it usually causes death. Another example is immunization. The basic of it is to make the body ready for a disease. The body has its own defense against disease called the immune system. One special characteristic of the immune system is its ability to remember. If a person had been sick before and had recovered, the immune system produce a substance called antibodies which fight the disease if it comes back to the person.

The antibody is specific to a particular disease or antigen. An example of this is measles which is a virus. A person usually a child who had never been sick with measles is given a milder form of the virus, this cause the immune system to produce antibodies against the virus. If this person is exposed to the same virus in the future, the person's immune system will remember and will fight the virus.

For general prevention to be useful:

All content from Kiddle encyclopedia articles (including the article images and facts) can be freely used under Attribution-ShareAlike license, unless stated otherwise. Cite this article:
Disease Facts for Kids. Kiddle Encyclopedia.