Kids Encyclopedia Facts
This page is about the English village Dore. For the French artist, see Gustave Doré. For other uses, see Dore (disambiguation).

Dore is a large village in South Yorkshire, England. The village lies on a hill above the River Sheaf which gave Sheffield its name, and until 1934 was part of Derbyshire, but it is now a suburb of the city. Dore is served by Dore and Totley railway station on the Hope Valley Line between Sheffield and Manchester. The railway tunnel between Dore and Totley under a limb of the Pennines to Hathersage in Derbyshire is the longest such in England, second only to the Severn Tunnel between England and South Wales. They are the longest main line railway tunnels anywhere in Great Britain - the London Underground and Channel Tunnel to France excepted, of course. Dore has long enjoyed a reputation of being Sheffield's wealthiest suburb, and Dore and Totley was the only ward of the city which regularly elected a Conservative councillor. However, as of May 2008 all three councillors were Liberal Democrats. The Member of Parliament for Sheffield Hallam constituency, of which Dore is part, is Liberal Democrat Nick Clegg, who from 2010 until 2015 served as Britain's deputy prime minister in the Coalition government. 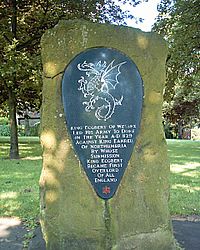 The name Dore derives from the same Old English root as door, signifying a 'gateway' or pass between two kingdoms. The Limb Brook, River Sheaf, and Meers Brook marked the boundary between the Anglo-Saxon kingdoms of Deira (later Northumbria) and Mercia.

The Anglo-Saxon Chronicle contains the earliest written record of Dore, recording that in 827 (more likely 829) King Egbert of Wessex led his army to the village to receive the submission of King Eanred of Northumbria, thereby establishing his overlordship over the whole of Anglo-Saxon Britain:

This year was the moon eclipsed, on mid-winter's mass-night; and King Egbert, in the course of the same year, conquered the Mercian kingdom, and all that is south of the Humber, being the eighth king who was sovereign of all the British dominions. Ella, king of the South-Saxons, was the first who possessed so large a territory; the second was Ceawlin, king of the West-Saxons: the third was Ethelbert, King of Kent; the fourth was Redwald, king of the East-Angles; the fifth was Edwin, king of the Northumbrians; the sixth was Oswald, who succeeded him; the seventh was Oswy, the brother of Oswald; the eighth was Egbert, king of the West-Saxons. This same Egbert led an army against the Northumbrians as far as Dore, where they met him, and offered terms of obedience and subjection, on the acceptance of which they returned home.

It can therefore be reasonably argued that Egbert became the first king of all England at Dore. A plaque commemorating the event was erected on the village green in 1968 by the Dore Village Society. The Old School was built in 1821 on the site of a previous school, on the right hand side was the teacher's accommodation. When Dore's new school was opened, the Old School was restored and opened as a community centre. 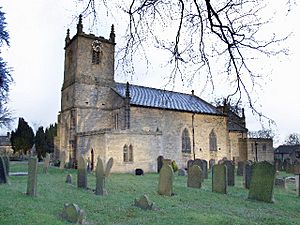 Christ Church Dore was built in 1829 and Dore became a separate parish in 1844. Dore remained a small village, having a population of just 500 in the 19th century, until it was annexed by Sheffield in 1933.

A paper mill was built on Avenue Farm in the 17th century, Joshua Tyzack converted the building into a scythe forge in 1839 and in 1881 built a large house next to the forge as a country retreat, his initials can be seen above the front door. In 1932 Dore's Parish council built a memorial commemorating the deaths of the First World War.

Brinkburn Grange was built in 1883 by Thomas B. Matthews. The land was part of Bradway Mill and Matthews was director of Turton Brothers & Matthews, a Sheffield steel, file and spring makers. The mill dam was then used as an ornamental lake. The Grange was demolished in 1938.

All content from Kiddle encyclopedia articles (including the article images and facts) can be freely used under Attribution-ShareAlike license, unless stated otherwise. Cite this article:
Dore Facts for Kids. Kiddle Encyclopedia.