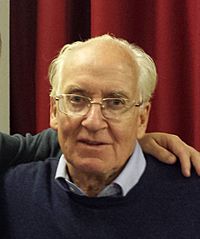 Douglas Keith Scott CBE (29 May 1941 – 7 December 2020) was an English mountaineer. He was born in Nottingham, Nottinghamshire. He was known for being on the team that made the first ascent of the south-west face of Mount Everest on 24 September 1975.

In early 2020, Scott was diagnosed with brain cancer and lymphoma. He died on 7 December 2020 from the diseases, aged 79.

All content from Kiddle encyclopedia articles (including the article images and facts) can be freely used under Attribution-ShareAlike license, unless stated otherwise. Cite this article:
Doug Scott Facts for Kids. Kiddle Encyclopedia.