Ducktown (Cherokee: ᎦᏬᏅᏱ, translit. Gawonvyi) is a city in Polk County, Tennessee, United States. The population was 427 at the 2000 census and 475 at the 2010 census. It is included in the Cleveland Metropolitan Statistical Area.

Ducktown was the center of a major copper-mining district from 1847 until 1987. The district also produced iron, sulfur and zinc as byproducts. Ducktown was the birthplace of Rockabilly Hall of Famer, Stan Beaver.

The Cherokee inhabited the Copper Basin as early as the late 18th century, well before the arrival of the first Euro-American settlers. The Cherokee village of Kawana— which means "duck town" in English— is believed to have been located at the confluence of the Ocoee River and Tumbling Creek. The village's name first appears on Cherokee annuity distribution rolls as "Ducktown" in 1799. According to tradition, Ducktown was named after a Cherokee leader named Chief Duck.

In 1836, the Cherokee relinquished control of the Copper Basin to the U.S. government as part of the Treaty of New Echota. Although the U.S. removed many of the basin's Cherokee inhabitants, several managed to avoid detection by hiding out in the surrounding mountains. They would later help build the Old Copper Road (now part of US-64). In the 1840s and 1850s, Ducktown was called "Hiwassee" or "Hiawassee," which was subsequently the name applied to the city's first major mining operation. 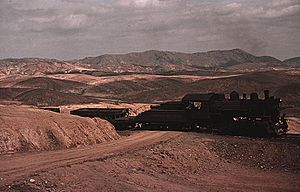 A train bringing copper ore out of the Ducktown mines, 1939. Smelter fumes have destroyed all vegetation and eroded the land. Photo by Marion Post Wolcott.

The copper was discovered in 1843 by a prospector, presumably panning for gold, who found nuggets of native copper. The first shipment of copper ore was taken out on muleback in 1847. More than 30 mining companies were incorporated between 1852 and 1855 to mine copper at Ducktown. Development was accelerated by a road built in 1853 connecting the area with Cleveland, Tennessee. The first smelter was built in the Ducktown district in 1854.

Mining ceased when Union troops destroyed the copper refinery and mill at Cleveland, Tennessee in 1863. Mining resumed in 1866, and continued until 1878, when the mines had exhausted the shallow high-grade copper ores.

Open roasting was replaced by pyritic smelting in 1904, and the smelters began recovering most of the sulfur in the form of sulfuric acid rather than releasing it to the atmosphere. Froth flotation was added in the 1920s.

Ducktown is situated at the center of the Copper Basin (sometimes called the Ducktown Basin), a broad valley located in the southern Appalachian Mountains near the intersection of Tennessee, Georgia, and North Carolina. The Ducktown area is part of the Ocoee River watershed, which passes through the Copper Basin a few miles southwest of Ducktown before entering its gorge. Ducktown is centered just north of the junction of Tennessee State Route 68, which connects the city to Madisonville to the north and Copperhill to the south, and U.S. Route 64, which connects the city to Cleveland (via the Ocoee River Gorge) to the west and Murphy, North Carolina to the east.

According to the United States Census Bureau, the city has a total area of 1.9 square miles (4.9 km2), all land.

View across Ducktown, with Big Frog Mountain in the distance

There were 209 households, out of which 16.3% had children under the age of 18 living with them, 37.8% were married couples living together, 7.7% had a female householder with no husband present, and 49.3% were non-families. 46.4% of all households were made up of individuals, and 27.8% had someone living alone who was 65 years of age or older. The average household size was 2.04 and the average family size was 2.92.

All content from Kiddle encyclopedia articles (including the article images and facts) can be freely used under Attribution-ShareAlike license, unless stated otherwise. Cite this article:
Ducktown, Tennessee Facts for Kids. Kiddle Encyclopedia.