Economy of Dublin facts for kids

The south facade of the Custom House by night

Dublin is the largest city and capital of Ireland, and is the country's economichub. As well as being the location of the national parliament and most of the civil service, Dublin is also the focal point of media and culture in the country. Ireland's transportation network radiates from the city and Dublin Port is responsible for a large proportion of Ireland's import and export trade.

Dublin is home to a large number of multinational corporations, particularly in "hi tech" sectors such as information technology, digital media, financial services and the pharmaceutical industry. Dublin is also the location of the headquarters of several large Irish public companies including Élan, Bank of Ireland, Ryanair, Smurfit Kappa Group and Paddy Power. Many large Irish public sector employers are based in Dublin including large utility companies such as ESB Group, educational institutions such as Dublin Institute of Technology, Trinity College, Dublin and University College Dublin, most of Ireland's higher courts, RTÉ -Irelands national public service broadcaster and several large Teaching hospitals. Other notable sources of employment include tourism and retail.

Dublin was at the centre of Ireland's rapid economic growth from 1995 to 2007 when both the standards and the cost of living in the city rose dramatically. In 2007 Dublin ranked 1st in Ireland by Disposable Income per person, at 109% of the State average. The three counties surrounding Dublin also ranked in the top 5. In 2008, it was the city with the 2nd highest wages in the world, but dropped to 10th place in 2009.

According to Eurostat 2012 figures, the GDP of Greater Dublin(which includes Counties Meath, Kildare and Wicklow) was €85.7bn representing 47% of Irish GDP and a high GDP per capita of €40,000. County Dublin alone has a GDP of €73 billion and a GDP per capita of €57,200. 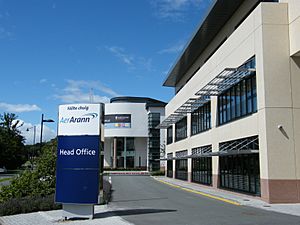 Dublin is the fulcrum of the Irish transport system. Ireland's two longest canals, the Royal Canal and the Grand Canal, meet in Dublin Bay. The Irish railway system radiates from Dublin run by Irish Rail. Similarly, the Irish road system was constructed spreading outwards from Dublin. Dublin Port is Ireland's largest port facility, and has the deepest port on Ireland's East coast. The port of Dún Laoghaire is also located within the county.

The Dublin Airport is the biggest and busiest in Ireland, with two terminals, handling over 25 million passengers annually. The Irish airlines Aer Arann, Aer Lingus, CityJet and Ryanair all have their own head office in Dublin.

Heuston and Connolly stations are the two main railway stations in Dublin. Operated by Iarnród Éireann, the Dublin Suburban Rail network consists of five railway lines serving the Greater Dublin Area and commuter towns such as Drogheda and Dundalk in County Louth. One of these lines is the electrified Dublin Area Rapid Transit (DART) line, which runs primarily along the coast of Dublin, comprising a total of 31 stations, from Malahide and Howth southwards as far as Greystones in County Wicklow. Commuter rail operates on the other four lines using Irish Rail diesel multiple units. In 2013, passengers for DART and Dublin Suburban lines were 16 million and 11.7 million, respectively (around 75% of all Irish Rail passengers).

The Luas is an electrified light rail system, which is ran by Veolia Transport, has been operating since 2004 and now carries over 30 million passengers annually. The network consists of two tram lines; the Red Line links the Docklands and city centre with the south-western suburbs, while the Green Line connects the city centre with suburbs to the south of the city and together comprise a total 54 stations and 38.2 kilometres (23.7 mi) of track. Construction of a 6 km extension to the Green Line, bringing it to the north of the city, commenced in June 2013.

Metro North is planned to run in 2026 from St. Stephen's Green to the airport and on to Swords, ending at the Broadmeadow Estuary. Its route is planned to consist of two deep bore tunnels under the airport and in the city, along with cut and cover tunnelling through the main street in Ballymun along with surface running in non-built-up areas, and a few elevated sections. Construction of the 17 km line would commence in 2020 and begin operation in 2026. Cost of the line is estimated at €2.4 billion.

Dublin occupies a key location on the Irish transport system, connecting the most productive part of the country with the main export port. Ireland's most widely known alcoholic drink, Guinness has been brewed at the St. James's Gate Brewery since 1759. The Guinness firm had established for providing the best pay and conditions in the Dublin area for many generations, when economic conditions were adverse. Dublin also profited from the role of the beef industry, as the main export port for beef bound to Britain. Dublin did not feature prominently in the development of Irish dairy-farming, which was concentrated in Munster and south Leinster.

There are 18,500 people working in 180 companies in the Irish engineering sector which equates to €4.2 billion of exports. Companies in this sector include: Liebherr, Sulzer, Element Six and Thermoking.

There are several commercial clusters in Dublin, including:

With the emergence of the Irish state, Dublin started to develop a lot of light industry. This contrasted with Cork a which concentrated on heavy industry until the 1960s. Dublin gained from this, as these sectors generated high valued added, and higher employment rates. Several pharmaceutical companies have headquarters or manufacturing operations in Dublin including Elan (company), Amgen, Pfizer and Takeda Pharmaceutical Company. 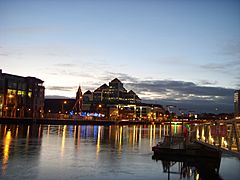 In the 1990s, Ireland became a successful player in new high-technology sectors based on modern information and communications technologies. It is becoming the multilingual internet capital of Europe, and is regarded as the Silicon Valley of Europe, attracting thousands of people from France, Germany, Spain, Italy, and the UK. Many IT companies such as B3Multimedia have located in the city, particularly in the south inner area of Dublin 2, and the adjacent counties, among them Amazon, Ebay, Dell, Facebook, Zynga, Dropbox, LinkedIn, Indeed, Twitter, Google, EMC, Microsoft, Oracle, PayPal, SAP, Symantec, and Yahoo!. Hewlett-Packard and Intel have large manufacturing plants in Leixlip, 15 km (9 mi) to the west of the city centre.

Also located in Dublin is the Internet Neutral Exchange (INEX) which provides high-speed, reliable and resilient IP traffic exchange facilities for both Irish and international IP service and content providers.

Dublin is fast becoming the Internet capital of Europe. Most of these companies are located in the Silicon Docks.

Dublin boasts one of the densest clusters of data centres in Europe. The area surrounding Ireland’s capital city already has as many as 30 large-scale data centre operations, including global operations run by Google, Microsoft and Amazon.

Some of the companies involved in the cloud computing sector are: Citrix, EMC2, Dropbox, Salesforce and Zendesk.

List of universities and third-level colleges in the Dublin region.

Over the last fifteen years, Dublin has undergone huge regeneration, which has contributed to the Irish economy as a whole. The Dublin Docklands which has been at the forefront of this rengeneration effort has seen billions of euro in investment.

Ballymun Regeneration is a multibillion-euro project which has created a new town with new and improved facilities for the 30,000 people who will live there. The 36 Housing blocks were demolished and replaced by at least 5,000 new homes in a variety of styles and sizes in five existing neighbourhoods including a new civic, arts, sports and leisure centres, playing pitches as well.

The economic boom years of the "Celtic Tiger" led to a sharp increase in construction. However, as of 2007, unemployment is on the rise as the housing market has begun to see supply outstrip demand.. The U2 Tower will be the tallest building on the island of Ireland when it is finished. Although its construction is under review after the recent financial crisis.

In 2005, around 800,000 people were employed in Greater Dublin, of whom around 600,000 were employed in the services sector and 200,000 in the industrial sector. In April 2007 the Irish central bank predicted medium-term growth rates of around 3–5% though by 2012 emigration was a renewed feature of Dublin and Irish life.

All content from Kiddle encyclopedia articles (including the article images and facts) can be freely used under Attribution-ShareAlike license, unless stated otherwise. Cite this article:
Economy of Dublin Facts for Kids. Kiddle Encyclopedia.